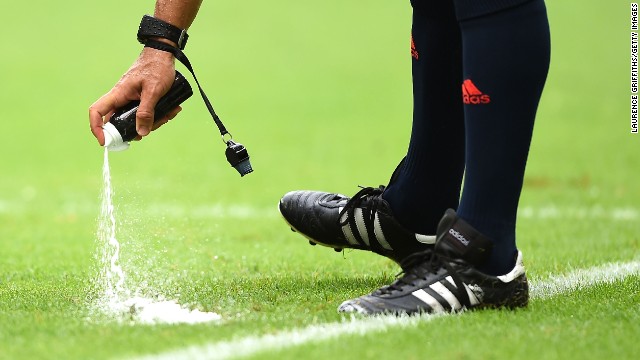 It's there one minute ... and gone the next. This "magic spray" has been one of the stars of the World Cup in Brazil. 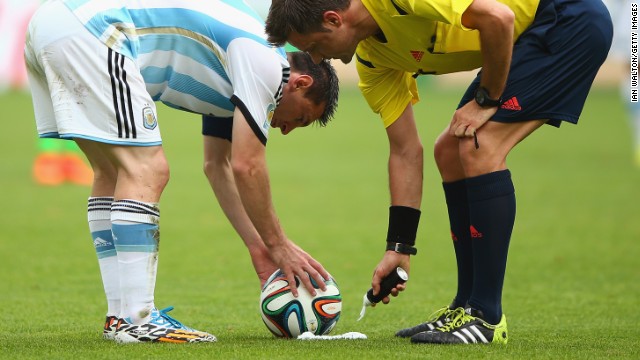 It has been introduced in order to give top stars such as Lionel Messi more of a chance to show their dead-ball skills. 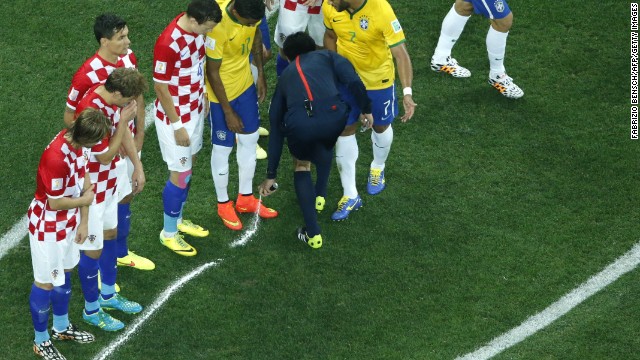 First the match official sprays around the ball, as seen in the previous image, and then marks out the 10 yards (9.15 meters) to where the defending team's wall must retreat. 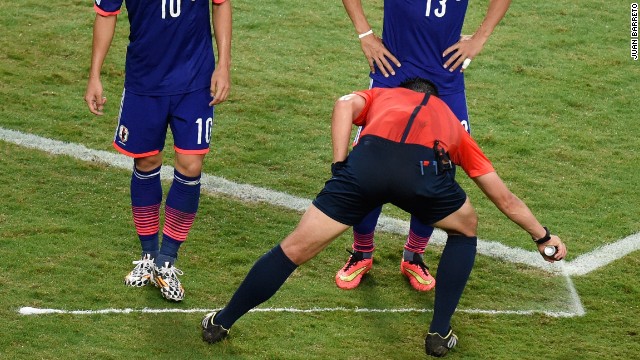 Previously, players have tested officials -- and the patience of opponents and watching fans -- by getting as close to the free-kick taker as possible. 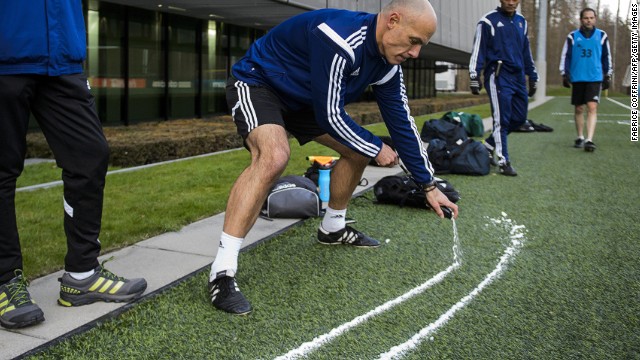 Here English referee Howard Webb tries the vanishing spray during a seminar for 2014 FIFA World Cup referees on March 27, 2014 at the home of FIFA in Zurich. 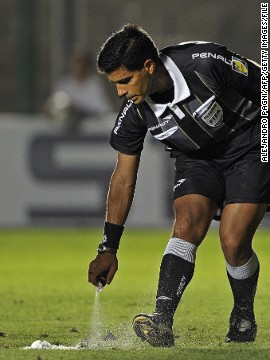 Editor's note: How are you celebrating the World Cup? Join the global conversation on CNN Facebook Pulse

(CNN) -- It's been a World Cup notable for late drama in most of the matches and a high number of goals scored, particularly in the preliminary stages.

New heroes like James Rodriguez of Colombia have also emerged, while modern technology has been introduced for the first time to decide if the ball has crossed the goal line.

But for some, the real star of Brazil 2014 comes in a small spray can, a "magic foam" which allows referees to make sure players retreat the requisite 10 yards (9.15 meters) when a free kick is awarded against them.

Referees have been brandishing the spray with flourish, pacing out the distance then marking it with a line of the spray, over which they can see if a player has edged too close to the taker of the free kick.

It has also been used to mark the exact location of a free kick, stopping players from gaining an advantage by edging forwards nearer the goal.

Due to its properties of butane, isobutane, propane gas, water and other chemicals, the line on the pitch made by the spray quickly disappears.

It is also environmentally friendly as it is biodegradable and doesn't damage the pitch of the atmosphere.

"It is very good," FIFA president Sepp Blatter said of the spray's impact. "It disciplines the players.

"It gives the attacking teams the chance to take the free kick from the real distance, not from where the wall is always moving.

"Some players have said now we have nine meters but in our leagues we have six or seven meters."

The brainchild of a former amateur player from Brazil, with a German-sounding name, Heine Allemagne, it was used as first used as far back as 2000 in a junior football tournament in the Brazilian city of Belo Horizonte.

The spray was then known as "Spuni," but after Allemagne joined forces in 2006 with an Argentine, journalist Pablo Silva, to refine the product, it has been renamed "9.15 Fair Play."

The big breakthrough for the spray came in 2012, when the IFAB (the law-making body of the game) authorized the product for international use.

FIFA tested the spray in 2013 at its Under-17 and Under-20 World Cups and gave the go-ahead for this year's senior showpiece soon after.

"It is literally a dream come true to see 9.15 Fair Play being used at this World Cup and seen by billions of people across the globe," said Allemagne.

Judging by its success, with statistics pointing to more goals coming from free kicks and less time needed to take them, the little spray cans are set to be a permanent addition to the back pockets of referees for many years to come.

Read: Is this the end of the road for Brazil?