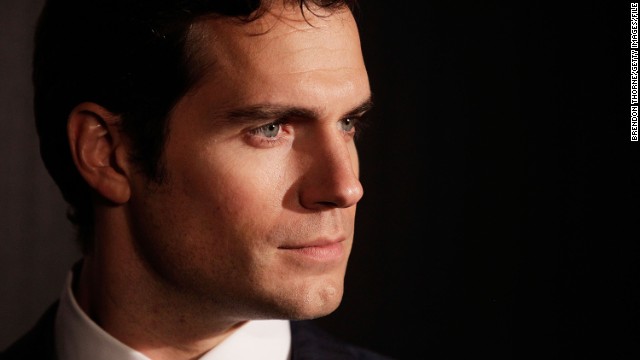 (CNN) -- Henry Cavill hasn't slipped into his "Batman v Superman: Dawn of Justice" cape yet, but this is a start.

On Monday, the Internet got its first look at Cavill as Clark Kent in the "Man of Steel" sequel courtesy of the Royal Marines Charitable Trust Fund.

The U.K.-based organization works with current and retired Royal Marines and their families with a mission of giving them a better way of life, and British actor Cavill is one of the charity's big supporters.

A treat for a Monday morning for all our #HenryCavill fans. Henry is a great supporter of the @RM1664Challenge! http://t.co/q4HcEqw0Mr

In the photo shared by RMCTF, Cavill's seen on the "Batman v Superman" set wearing the kind of straitlaced suit and tie that Superman's alter-ego, Clark Kent, would favor. (And since he's standing next to a director's chair bearing the name "Clark," the presumption is that Cavill appears dressed in character as the Daily Planet reporter.)

There isn't much else to fill fans in on what director Zack Snyder is cooking up for his 2016 release, but we already know that the movie is filming in some disparate locations: Warner Bros. confirmed in May that production on "Batman v Superman: Dawn of Justice" will take place in Detroit, Michigan, as well as various international locales.

Written by Chris Terrio, "Batman v Superman: Dawn of Justice" is slated to arrive on May 6, 2016.