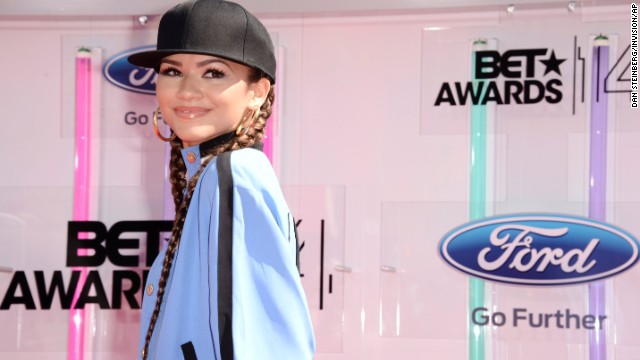 Zendaya arrives at the BET Awards at the Nokia Theatre on Sunday, June 29, 2014, in Los Angeles.
STORY HIGHLIGHTS

(CNN) -- Lifetime's biopic of the late singer Aaliyah is now without a star.

The network confirmed via Twitter on Sunday that Zendaya, the 17-year-old Disney actress and singer tapped to portray Aaliyah in the TV movie, has exited the project.

"We are sad Zendaya will no longer portray Aaliyah," Lifetime said. "Production is currently on hold."

It's an abrupt change for the film, as Zendaya, whose full name is Zendaya Coleman, was just announced as the biopic's lead on June 16.

The young star, known for her role on Disney's "Shake It Up!" and Season 16 of "Dancing With the Stars," didn't release an official comment on her departure but did acknowledge the casting shakeup on Twitter by quoting a source's statement to E! News.

"Aaliyah has always been a source of inspiration to Zendaya. She was honored to portray her and pay tribute to her...

...if she is going to do it, she wants to do it right." pic.twitter.com/SSVYpA3SrK

"Aaliyah has always been an inspiration to Zendaya," the source told E!. "She was honored to portray her and pay tribute to her. If she is going to do it, she wants to do it right."

Aaliyah, born Aaliyah Dana Haughton, was killed in a 2001 plane crash at the age of 22. Her legacy as an R&B/pop singer and actress has been immense, to the point that even using her voice in a song can make fans bristle. Zendaya's casting was similarly controversial, with fans being divided over whether the burgeoning talent should take on the role.

With news that she's now out of the project, some are curious if the casting criticism played a role in her departure.

Disney star Zendaya Coleman will no longer star in the Aaliyah movie that was set to film this summer. Perhaps the pressure was too much.

Yet from the beginning, the teen star made it clear that Aaliyah has been a lifelong inspiration for her, and she told MTV News on the BET Awards red carpet that she wasn't sure the biopic would do justice to her idol.

"I just felt the project wasn't 100% there," she told MTV, saying that the production felt "a little rushed." Because "she's someone I admire and I love so much, it can't be done halfway, or not to the standards I think it should be done at, so I just decided not to do it.

"By all means, when the right project comes along and it's done the right way, I'll be the first person ready to play Aaliyah, but this wasn't the right one for me. I've been into Aaliyah since I was little, so there wasn't too much getting into character. I always pretend I'm her anyway."