(CNN) -- It doesn't matter if your invitation to Kimye's wedding got lost in the mail: Instagram has got you.

The social media site has turned into the unofficial wedding album of Kim Kardashian and Kanye West. The happy couple tied the knot this past weekend in Florence, Italy, and fans got to feel like they were right there for the action, thanks to the photos. 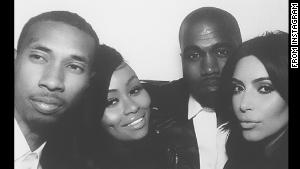 Kim Kardashian and Kanye West say I do

Keeping up with the 'Kimye' wedding

The pair even released some of the first images of their ceremony on Instagram and Twitter. There was Kardashian, dressed in her custom white Givenchy gown with lace, kissing her new husband (also in Givenchy). There is also a shot of the newlyweds walking down the aisle after the ceremony.

But the real fun apparently happened at the reception, where a wedding booth captured various images, including the now-Mr. and Mrs. West sporting matching leather jackets with the words "Just " on his and "Married" on hers.

Kardashian posed with the man who made her wedding gown, Givenchy creative designer Riccardo Tisci, and Tisci in turn posted a picture of the back of Kardashian's dress showing its detail. He also posted a shot of her massive veil.

Guests like LaLa Anthony, wife of professional basketball player Carmelo Anthony, got in on the action, posing with the new couple.

But the image from the reception that has caused the most head-scratching has been the photo of Will Smith and Jada Pinkett Smith's 15-year-old son, Jaden, dressed in a white Batman outfit.

Adding to the curiosity factor: Smith is photographed with Joe Francis of "Girls Gone Wild" fame and Kourtney Kardashian.