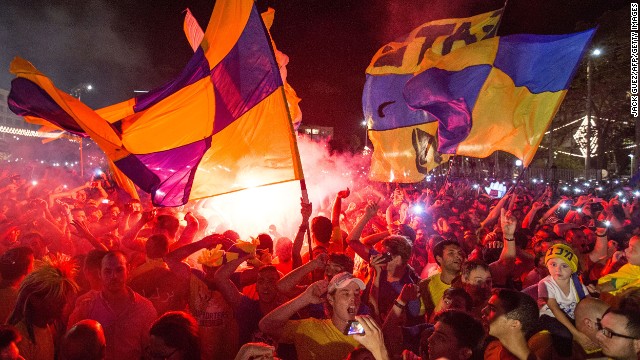 "Now I understand Hitler and his hate for Jews," one tweet read. That user removed the tweet and is now apologizing profusely, tweeting that his "empty words" were a joke and that he never meant to offend.

Another hateful tweet said the Maccabi team would hit the showers after the game, "but in the gas chamber, I hope."

That user appears to have removed his as well. He also retweeted an op-ed from the Spanish newspaper El Pais arguing that while concern about hateful tweets makes sense, such offenses should not be considered illegal.

Anti-Semitism found in 1 in 4 people

But to some leaders of Jewish communities in Spain, these and numerous other tweets crossed a legal line.

"We are standing up and saying enough is enough. We're not going to allow this anymore," Uri Benguigui, chairman of the Barcelona Jewish Community, told CNN on Wednesday.

Various Jewish groups have come together to file a legal complaint calling for the offenders to be punished.

"To send a message to Spain that this is not OK," Benguigui said.

It's not that the groups want these people incarcerated, he said. But they want some kind of sentence. "There is a problem with anti-Semitism in Spain. I want them to fix this problem," he said.

He pointed to a recent global study published by the Anti-Defamation League that found one in four adults worldwide are "deeply infected with anti-Semitic attitudes." In Spain, the study found, 29% of the adult population believed most of the anti-Semitic stereotypes in the survey -- the third highest number in Western Europe after Greece at 69% and France at 37%.

European nations don't have the same freedom of expression protections that the United States does. "When you cross a line, you face a problem," said Benguigui.

Unclear how many anti-Semitic tweets

Many of the offensive tweets used a hashtag that included an expletive followed by "judios," which means Jews. A software program found about 17,500 such tweets at the point that the Jewish groups complained, Benguigui said.

The complaint triggered global headlines citing this number of anti-Semitic tweets. But in fact, many of those tweets were from people saying how offensive the hashtag was. In the interview with CNN, Benguigui said the groups don't know how many of the tweets using the hashtag actually were anti-Semitic.

When hashtags trend that are offensive against any group, it's often due to a mix of people saying offensive things and those calling out the offensive messages. The same happened this week in France with the hashtag "#MerciHitlerPour3945," thanking Hitler for World War II.

Benguigui said his and other groups have identified five of the offending Twitter users. And he wants more of them identified. It's an issue Twitter has faced repeatedly in recent years.

Last year, a French court demanded that Twitter identify those who post hate speech, the technology website ArsTechnica reported in a story on CNN.com. In 2012, under pressure from the French advocacy group Union of Jewish Students, Twitter agreed to remove some offensive tweets. Also that year, at Berlin's request, Twitter suspended a German neo-Nazi account based in the city of Hanover, marking the first time the company had responded to such a government request, the report said.

"We work very hard to protect people's experiences on Twitter, but sadly there are a small amount of people in this world who are intent on causing distress for others both offline and online," Twitter said Wednesday in a statement sent to CNN. "On Twitter we have rules which govern how people can behave and targeted abuse and direct threats of violence are against our rules. When they sign up, Twitter users agree to respect them."

With more than 500 million tweets a day, "we rely on our users to report content" that violates rules, the statement said. To report any tweet, a user can open it, click "More," and then "Report Tweet." A real person ends up reviewing it.

On its site called "Transparency Report," Twitter lists information requests from governments, removal requests and copyright notices. The company also works with different countries to provide information within different legal systems, and posts its moves at the website chillingeffects.org.

Benguigui sees this effort as a sign of what Jewish people in Spain have been going through. "We've been hidden for many years," he said. "We didn't want to appear, didn't want to make noise."

He cites the Inquisition, which began in the 1400s and was not officially abolished until the 19th century.

"It's time to say, 'We are home, we have equal rights, we have the same opportunities as everyone,' " Benguigui said. "We need to educate people."

Your thoughts for a story: What's the best way to handle vile, offensive tweets? Ignore? Report? Highlight? Drown out?