Los Angeles (CNN) -- Rapper Macklemore, who won a Grammy for a song praised for its cultural sensitivity, insists that he wasn't stereotyping Jews with a costume he wore to a Seattle event Friday.

The hat, big fake nose, black beard and wig were "a random costume" thrown together "so that I could walk around unnoticed and surprise the crowd with a short performance," the rapper said in an "apology to anybody that I may have offended" released Monday night.

While the Anti-Defamation League said the group would "take him at his word that he did not have any ill intent," comedian Seth Rogen failed to see the comedy, calling Macklemore out on Twitter for wearing an "anti-Semitic costume" while performing his hit song "Thrift Shop." 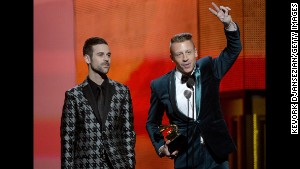 Such criticism may be a new experience for Macklemore, who became the progressive darling of the music industry last year when he and producing partner Ryan Lewis released "Same Love." The song became an anthem for the same-sex marriage movement, and the duo was rewarded with four Grammys.

"Family, friends and fans alike who know me well, know that I'm absolutely not the person described in certain headlines today," Macklemore said in Monday's statement. "There is no worse feeling than being misunderstood, especially when people are hurt or offended."

Macklemore said the misunderstanding happened because he wanted to surprise fans at a show at Seattle's EMP Museum on Friday night.

"Earlier in the day I thought it would be fun to dress up in a disguise and go incognito to the event, so that I could walk around unnoticed and surprise the crowd with a short performance," he said.

"I picked up a bunch of fake mustaches and beards and grabbed a leftover wig from our recent trip to Japan," he said. The only fake nose he could find at a costume store at the last minute was "a big witch nose."

His only aim was to disguise himself, not to be "any 'type' of person," he said. "I wasn't attempting to mimic any culture, nor resemble one.  A 'Jewish stereotype' never crossed my mind."

Some people who saw him suggested that he looked like former Beatle Ringo Starr or President Abraham Lincoln, he said.

He said it was "surprising and disappointing" that photos of his "disguise were sensationalized leading to the immediate assertion that my costume was anti-Semitic."

He did, however, "acknowledge how the costume could, within a context of stereotyping, be ascribed to a Jewish caricature."

"His costume choice and subsequent response demonstrate an utter lack of sensitivity," a statement from the group said. "Stereotypes are dangerous and offensive. Stereotypes dehumanize -- removing individuality and promoting intolerance."

.@macklemore really?? Because if I told someone to put together an anti Semitic Jew costume, they'd have that exact shopping list.

Rogen isn't buying Macklemore's "random costume" explanation. "@macklemore really?? Because if I told someone to put together an anti Semitic Jew costume, they'd have that exact shopping list."

The Anti-Defamation League said in a statement Tuesday that it welcomed Macklemore's apology.

"We take him at his word that he did not have any ill intent and unreservedly accept his apology," ADL National Director Abraham Foxman said. "We know that Macklemore is someone who has used his platform in the past to stand up and speak out against intolerance and bigotry, particularly homophobia. With that in mind we believe that this matter is little more than 'a tempest in a teapot' over an unfortunate choice of wardrobe."

Macklemore said his "body of work and the causes for which I've supported speak for themselves." Critics should "take a few moments to discover the human and artist that I strive to be."

"I respect all cultures and all people," he said. "I would never intentionally put down anybody for the fabric that makes them who they are. I love human beings, love originality, and ... happen to love a weird outfit from time to time."

Ryan Lewis on his mother's battle with HIV