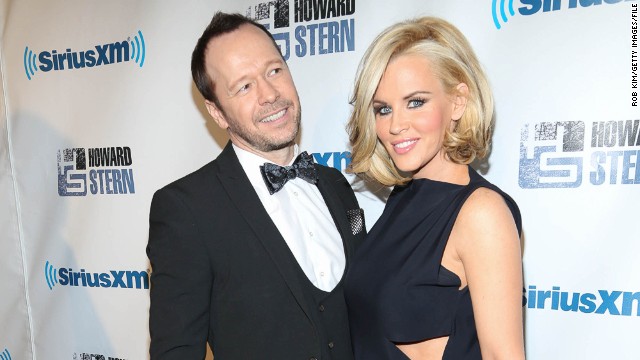 (CNN) -- What are the odds that Jenny McCarthy and Donnie Wahlberg will give us the '90s wedding of our dreams?

The former Playboy model and current "The View" co-host revealed on Wednesday's show that she and singer/actor Wahlberg are getting hitched.

"I just got engaged!" McCarthy gleefully shared on the ABC morning show while revealing her engagement ring, which features a yellow sapphire stone.

Wahlberg popped the question last weekend with help from McCarthy's 11-year-old son, Evan, and on Wednesday joined his bride-to-be on "The View."

On Twitter, Wahlberg, 44, had only one word for the announcement: "#Happy."

Thank you for all the sweet wishes. @DonnieWahlberg and I are grateful and blessed. #love #bhlove pic.twitter.com/tY15W1k5eg

While McCarthy was pretty convinced that she'd never marry again, it seems being with Wahlberg changed her mind. The couple began dating publicly last summer, and in November the TV personality said that she was starting to view marriage as a possibility.

"You know, I've said on every interview that I was like, 'Never, I'll never get married again, ever,' and, of course, you never say never," she told Bethenny Frankel on her talk show, "Bethenny." "I think he would be an amazing husband, so if he does (propose), I would for sure say yes."