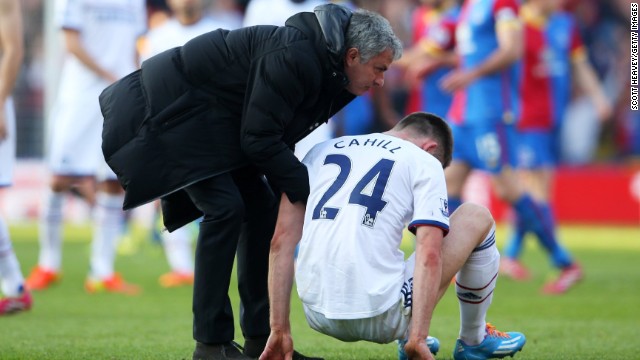 Jose Mourinho, left, will have to lift his players after Chelsea lost 1-0 at Crystal Palace on Saturday.
STORY HIGHLIGHTS

He is being proved right -- with Saturday not helping the Blues.

Chelsea suffered a shock 1-0 loss at relegation threatened Crystal Palace and hours later saw Manchester City gain a point thanks to a 1-1 draw at Arsenal. It might have been worse for Chelsea, since City led 1-0.

"I think it is now impossible to win the title," Mourinho told Sky Sports before the Manchester City game. "We depend too much on other results."

Chelsea still leads the standings by a point over Liverpool and two over City but City has two games in hand and Liverpool will go top if it earns a point Sunday at home against Tottenham.

Manchester City, fresh off a convincing victory in the Manchester derby, took a deserved lead in London in the 18th minute when David Silva was the quickest to react after Edin Dzeko's left-footed shot struck the post.

Arsenal appeared listless, perhaps the result of losing 6-0 at Chelsea last week and then dropping more points against Swansea.

But the Gunners were a different side in the second half, leveling through defensive midfielder Mathieu Flamini in the 53rd. And Arsenal almost took the lead, Joe Hart stopping Lukas Podolski with City creaking.

In the end City seemed happy to take a point judging by manager Manuel Pellegrini's substitutions.

"We played better in the first half," Pellegrini told Sky Sports.

John Terry, so solid for Chelsea this season, gave Palace a valuable three points with an own goal in the 52nd minute.

Mourinho didn't blame Terry and in fact praised his four main defenders as a whole. However, he added: "You have other players who are fantastic in some matches and disappear in other matches."

Manchester United has struggled in its first season under David Moyes but there were boos when a banner flew above Old Trafford calling for the Scot's departure.

Wayne Rooney -- a week after his wonder goal from the halfway mark against West Ham -- scored twice in United's 4-1 lunchtime win over Aston Villa. Rooney was substituted in the second half, days ahead of United's Champions League quarterfinal against title holder Bayern Munich.

Elsewhere, English trio Rickie Lambert, Jay Rodriguez and Adam Lallana shone for Southampton again in a 4-0 home win against Newcastle; and relegation contenders West Bromwich Albion and Cardiff City played to a 3-3 draw after both scored deep in injury time.