Part of complete coverage on
Chicagoland

5 ways you can make Chicago stronger 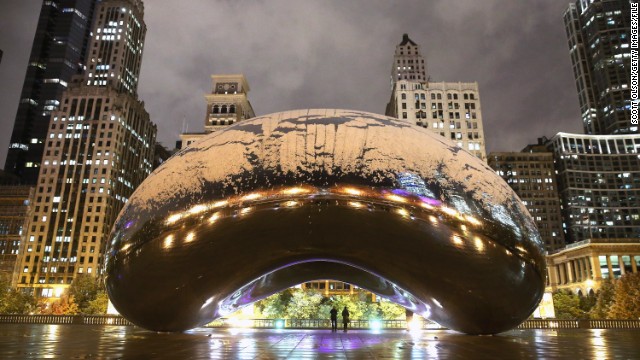 Editor's note: All the organizations cited have been vetted by CNN's Impact Your World.

(CNN) -- Chicago is the third-largest U.S. city, home to nearly 3 million people and the gateway to America's heartland. Like many other cities, it's working hard to combat violent gangs that make it dangerous to grow up in certain neighborhoods.

Things may be turning around under Police Superintendent Garry McCarthy: Murders have dropped under his leadership. And he says the city's violent reputation is "way overblown."

Still, Chicago struggles to create a safety net for those whose daily lives are affected by the intractable inner-city violence.

Politicians, teachers, community activists and other residents are all addressing different facets of this issue in CNN's original series "Chicagoland."

Here are some of the organizations featured in the CNN series that you can help to make Chicago a safer, stronger city:

1. Program to keep kids off the streets

Soccer, theater, creative writing, culinary arts -- these are much better alternatives for high school children who might otherwise be on the streets between the time they get out of school and their parents come home from work. These activities are part of a program called After School Matters, set up in 1991 by Maggie Daley, the late wife of former Mayor Richard M. Daley.

After School Matters raises money by selling some of the art made by teenagers in the after-school programs:

The program has had an impact on more than 100,000 teens since its inception, according to its website.

Chicago's public schools educate more than 400,000 children and, like a lot of school systems across the country, they've had to do it with a lot less money in recent years. If you've seen CNN's "Chicagoland," you know that the city's schools -- particularly Fenger High School, which is featured in the series -- are often the only chance many young people have to create a better future. You can help the school system with as little as $10 through the Children First Fund: The Chicago Public Schools Foundation. To help Fenger specifically, you can donate to Billy Dec and Juanita Jordan's fund-raiser for the school.

It's no surprise that Chicago has a thriving arts scene. Yet the world-class museums, theaters and concert halls might as well be a world away for many residents. To change that, several organizations are bringing the arts scene to all of Chicago. Teens in the diverse Albany Park neighborhood can channel their artistic expression onstage at the Albany Park Theater Project.

For future singers, the Chicago Children's Choir offers opportunities in 65 schools across the city to "(empower) singers to bridge cultural divides and become ambassadors of peace in their communities." And the Chicago Symphony Orchestra's Institute for Learning, Access and Training is helping develop the next generation of musicians across all areas of the city.

Organic produce is a rare sight in many of Chicago's poorer neighborhoods, but one organization is not only addressing that problem -- it's employing people in sustainable jobs to cultivate and distribute healthy fruits and vegetables.

Posting extra hard lately on Instagram. We are @growinghome there too. pic.twitter.com/UN0n70nZBh

Chicago's Growing Home organization counted down its achievements for 2013 on its blog, including distributing boxes of organic produce, training and supporting previously unemployed or underemployed Chicagoans, and raising awareness about the importance of a healthy lifestyle.

President Barack Obama got his political start in Chicago, and there's a good chance that another future American president is learning about civic leadership with the help of organizations such as Mikva Challenge and the Urban Alliance.

The Urban Alliance started an internship program in 2012, helping high school students learn key job skills and develop relationships with major business partners. All interns have graduated on time from Chicago public high schools, and nearly all are attending college.

Here are a few other groups helping to make Chicago a better city:

• Kids Off the Block

Is it possible to transform a violent gang into a force for good? Lonza "Batman" Harris Jr. talks about his "hidden agenda" to change the Gangster Disciples from within.
How Chicago stacks up

If you read the headlines out of Chicago on Easter weekend -- more than 40 shot, including nine killed -- you might be surprised to learn that the city's homicide rate is still trending downward, according to the police chief.
Tell us what you love about Chicago

Go to your favorite spot in the city, film a 15-second video and tell us what you love about living in Chicago.
Opinion: Rahm Emanuel's two cities
updated 11:02 PM EDT, Thu April 3, 2014

Chicago author and poet Kevin Coval writes that Mayor Rahm Emanuel is building two Chicagos, "One for the rich, one for the poor. One for private schools, one for closed schools."
Tackling Chicago's 'crime gap'
updated 12:03 PM EDT, Fri March 14, 2014

Live in Chicago's swanky Streeterville neighborhood and you might never hear a gunshot. But a few miles to the west or south, it's a very different story.
Chicago rapper balances fame, loss
updated 11:47 AM EDT, Thu March 27, 2014

A rising star from Chicago's South Side, Chance the Rapper, balances fame and the harsh realities of his violent hometown.
Crossing Chicago's economic divide
updated 11:19 AM EDT, Thu April 3, 2014

When a college student walks into a Chicago barber shop to get a trim, his barber's story changes the way he sees his hometown.
'Quintessential American city'
updated 9:19 AM EST, Tue March 4, 2014

If President Obama's Chicago-based "Becoming a Man" initiative is to be successful, transformations are needed in our social institutions as well.
3rd grader to Rahm: 'We are not toys'
updated 7:54 AM EST, Fri March 7, 2014

Robert Redford, who achieved stardom in feature films, has moved into the world of television production with the CNN Original Series "Chicagoland."
7 things to know about Chicago
updated 11:06 PM EST, Thu March 6, 2014

Is your knowledge of Chicago limited to just its clichés and celebrities? There's so much more to the Windy City (for example, don't ever call it that).
Politics and social issues collide
updated 7:53 AM EST, Fri March 7, 2014

Chicago Mayor Rahm Emanuel proposes to close some schools and is under pressure not to do so.
Opinion: Why it's not too late to educate
updated 7:45 AM EDT, Wed March 12, 2014

Many studies say it's too late for disadvantaged teens who aren't doing well in school. But two study authors say that's not what they've found.
Explore Chicago's neighborhoods

Chicago is made up of hundreds of neighborhoods and landmarks. Here's a look at some of the city's communities and icons.
Chicagoland: Fighting for a safer city
updated 7:54 AM EST, Fri March 7, 2014