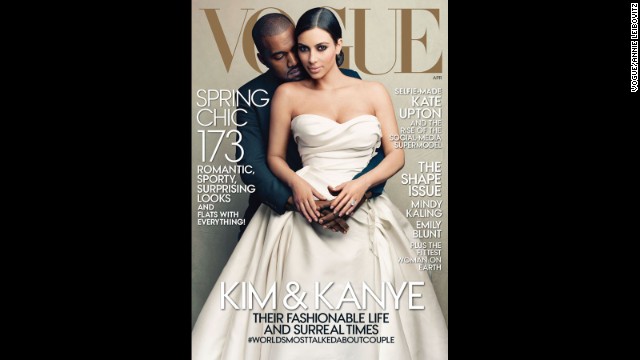 After all, he wanted Kim Kardashian for years, and is now set to marry her in May. (They already welcomed their first child together, North, last June.)

So should we be surprised that the rapper, who's previously campaigned for his bride-to-be to appear on the cover of Vogue magazine, can place a checkmark next to that goal?

It's true. Kardashian and West are appearing on the April issue of Vogue magazine. And this, soon after West proclaimed on Ryan Seacrest's radio show that it was preposterous it had not yet happened.

"There's no way Kim Kardashian shouldn't be on the cover of Vogue," West told Seacrest back in October. "She's like the most intriguing woman right now. ... and collectively, we're the most influential in clothing."

"No one is looking at what Obama is wearing. Michelle Obama can't Instagram a (bathing suit) pic like what my girl Instagrammed the other day."

The cover is vaguely reminiscent of Kardashian's other high-profile appearance on the front of People magazine in 2011, when she posed with her then-fiancé, basketball player Kris Humphries. Except this time, she's traded in the contemporary clothing for sumptuous luxury wares. 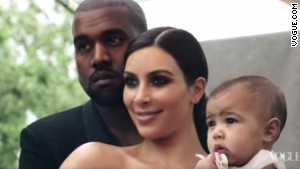 Calling Kardashian and West #theworldsmosttalkedaboutcouple, Vogue is promising a firsthand look inside the pair's "fashionable life and surreal times," including a glimpse of how they interact as parents. The pair's daughter, North, appears with them in a behind-the-scenes video of the Vogue photo shoot.

The unveiling of the issue, which arrives on newsstands March 31 and digitally March 24, was met with a mix of reactions, from stunned to supportive to upset.

"Somewhere, Victoria Beckham is flipping a table," joked one observer. "Vogue negotiates with terrorists," quipped another.

Vogue isn't a stranger to controversy -- earlier this year it was criticized by some for its treatment of "Girls" star Lena Dunham -- but the vitriol directed toward Vogue editor Anna Wintour regarding the April issue has been visceral.

The last ounce of respect I had for Anna Wintour and Vogue is officially gone.

"If someone could start a petition to have Anna Wintour fired over this, society would appreciate it," said @RunBritRun. "Anna Wintour RETIRE NOW. You're mentally unstable," chimed in @Jenovia.

"I just wonder what went through Anna Wintour's mind. Has she gone mad?" asked another onlooker.

"If anyone needs me, I'm going to be blowing cigarette smoke into a martini for the rest of the afternoon," Anna Wintour says, walking out.

Given the timing of the issue, a handful wondered if Vogue was pulling some sort of elaborate (not to mention expensive) April Fool's Day prank.

Anna Wintour has a sense of humor though. It's the April issue. And these are the biggest April Fools I've ever seen pic.twitter.com/Gb7VR8rk2d

Fans of the couple were just as breathless as Kardashian tweeted she was when they spotted the pair's glossy cover shot.

THATS IT. GIVE @KimKardashian HER CROWN! SHE IS OFFICIALLY THE QUEEN. VOGUE MAGAZINE?!? WOWWWWWWW.

"If you're actually mad at Kim and Kanye's Vogue cover," tweeted @Kia_Mak, "go outside, start walking and don't stop until you reach the horizon."

Added @PatrickSandberg, "Kim and Kanye refuse to accept the limitations people try to put on them and it's inspiring. They win."

Mostly, though, it looks some are just confused by the #worldsmosttalkedaboutcouple hashtag Vogue is trying to promote.

"Wait," said @NikiBlasina. "That doesn't look like Jay-Z and Beyonce."