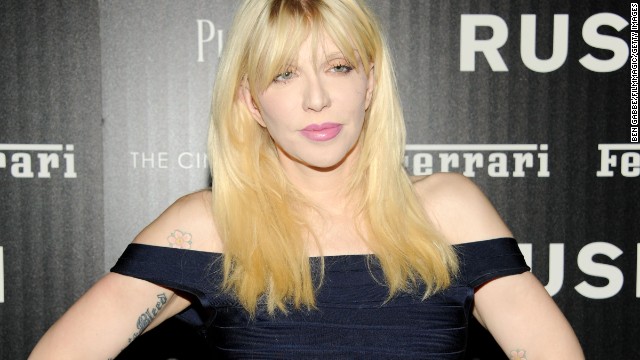 Courtney Love tweeted what she thought might be a clue to the disappearance of Malaysian flight 370.
STORY HIGHLIGHTS

(CNN) -- For a minute, Courtney Love believed she'd found a clue in the case of the disappearance of Malaysian flight 370.

The saga of the missing airplane has captured the public's attention, and Hollywood is clearly not exempt from the intrigue. Love, best known as a musician, actress and wife of the late Nirvana front man Kurt Cobain, tweeted a picture of a body of water with the caption "really? look closer? check it out @DR24 #MH370 and its like a mile away Pulau Perak, where they 'last' tracked it."

really? look closer? check it out @DR24 #MH370 and its like a mile away Pulau Perak, where they "last" tracked it pic.twitter.com/tqavAe4zIL

The "it" would be the Boeing 777-200 that has been missing, along with all aboard, for more than a week. The picture Love tweeted features drawn lines meant to point to what appears to be discolorations in the water and possible debris.

Another tweet from Love says "I'm no expert but up close this does look like a plane and an oil slick. ... prayers go out to the families #MH370" with a link to Tomnod.com, a crowdsourcing site that has enlisted participants to scour satellite imagery for clues.

I'm no expert but up close this does look like a plane and an oil slick. http://t.co/AR005kNTYR prayers go out to the families #MH370

Love told New York Magazine's Daily Intelligencer that "Yeah I went to the satellite site and just uploaded tons and tons of pictures. I really doubt aliens took it. It's got to be somewhere. I'm a little obsessive."

The Daily Intelligencer, however, pointed out that Tomnod ruled out the theory before Love even offered it.

"Although it is still an interesting clue, it is looking much more like the other boats operating in the region," they reported Tomnod as saying. "Keep up the good work."

The search for MH370 is moving to an area farther south in the Indian Ocean, said the Australian Deputy Prime Minister.
MH370 radar data may have been wrong
updated 8:33 PM EDT, Tue June 24, 2014

Erin Burnett speaks to Miles O'Brien about the latest in the search for Malaysia Airlines Flight 370.
Was search hundreds of miles off?
updated 12:53 PM EDT, Wed June 18, 2014

Ten experts say that the search for MH370 should move hundreds of miles away from the previous search area.
An empty space on earth
updated 9:22 AM EDT, Tue June 17, 2014

His wife never came home from her flight on MH370, and now K.S. Narendran is left to imagine the worst of possible truths without knowing.
MH370: 100 days of very little progress
updated 3:51 PM EDT, Mon June 16, 2014

Relatives of passengers are launching an effort to raise $5 million for investigations and a "whistle blower" reward.
Airlines want tracking technology
updated 3:31 AM EDT, Mon June 9, 2014

Making sure another plane is never "lost" again is the immediate priority for the airline industry.
Is this the sound of the crash?
updated 11:36 AM EDT, Fri May 30, 2014

Was the sound of Malaysian Airlines Flight MH370 striking the water captured by ocean devices used to listen for signs of nuclear blasts?
Search back to square one
updated 6:29 PM EDT, Wed May 28, 2014

What was believed to be the best hope of finding the missing plane is now being called a false hope. Rene Marsh explains.
Bring in the lawyers
updated 5:05 PM EDT, Wed May 28, 2014

Involved parties, including the manufacturer Boeing, are bracing for a long public relations siege.
Pings likely not from Flight 370
updated 7:34 AM EDT, Thu May 29, 2014

Official: The four acoustic pings at the center of the search for Flight 370 are no longer believed to have come from the plane's black boxes.
Quest: Is Inmarsat right?
updated 10:21 AM EDT, Tue May 27, 2014

There is one fundamental question which continues to swirl: Has Inmarsat got its numbers right?
Missing plane data released
updated 8:13 AM EDT, Tue May 27, 2014

Family members of the people aboard missing plane want independent investigators to review the newly released satellite data.
What will the Inmarsat data reveal?
updated 7:47 AM EDT, Wed May 21, 2014

CNN's Richard Quest explains what kind of information should be contained in the Inmarsat data from Flight MH370.
Underwater search on hold
updated 8:46 PM EDT, Mon May 26, 2014

The underwater search for the missing Malaysia Airlines plane will effectively be put on hold this week, and may not resume until August at the earliest.
An MH370 movie already?
updated 9:04 AM EDT, Mon May 19, 2014

Movie-makers in Cannes have announced they're making a thriller based on the disappearance of Malaysian flight MH370.
The story of the search
updated 3:25 PM EDT, Tue May 6, 2014

The search for the missing Boeing 777 has gone on for eight weeks now. CNN's David Molko looks back at this difficult, emotional assignment.