Take a look inside the world's largest mall 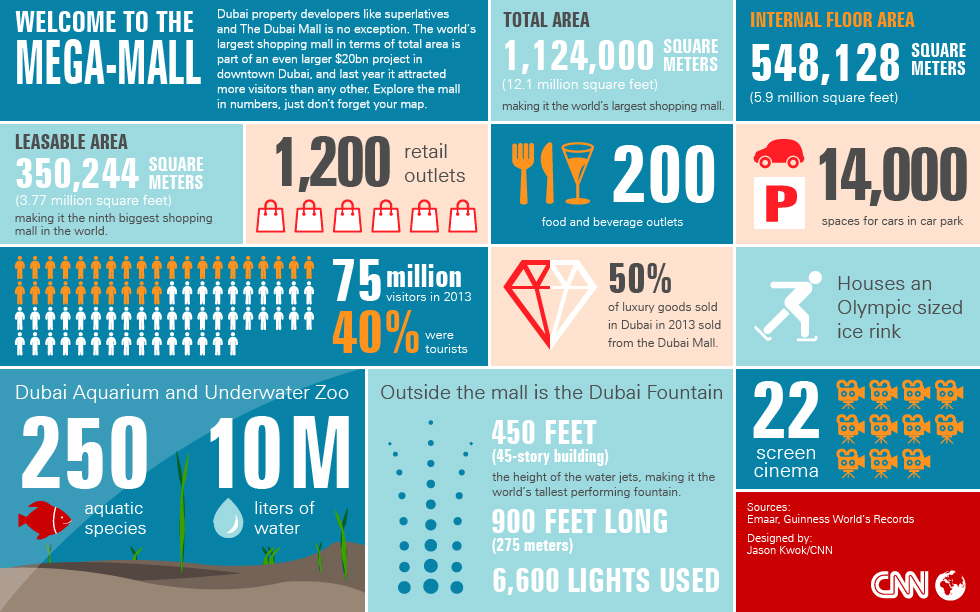 (CNN) -- It may seem stunning that one of the most visited tourist attractions on the planet is a mall. Attracting 75 million visitors a year, The Dubai Mall gets more foot traffic than the Eiffel Tower, Niagara Falls and Disney World combined.

Of course, The Dubai Mall is no ordinary shopping center. Billed as the world's largest (in terms of total floor space) by the Guinness World Records when it first opened in 2008, the mall is larger than 50 football pitches.

It houses 1,200 stores, an Olympic-sized ice skating rink, an aquarium, the world's largest shoe store, 14,000 parking spaces, and a Boeing 737 flight simulator. It was no small investment; the entire complex cost $20 billion to build.

"It's a city within a city," admits Mohamed Alabbar, chairman of Emaar, the development company responsible for building the mall.

It's a city within a city
Mohamed Alabbar, Emaar

Sharks and otters inside a mall?

As one can imagine, running such an enterprise is challenging, and it takes a lot of man power. With 20,000 employees, the mall's staff is equivalent to the size of a small army.

"To make it work, you need to have a tremendous amount of people that are on the job 24 hours a day," says David Macadam, CEO of the Middle East Council of Shopping Centers.

Though the mall closes at 10pm (midnight on the weekends), in some ways it is busiest after hours, when a cleaning crew of 100 sweep, vacuum and polish over 1.5m square feet of space every night.

"It's a huge mall," notes Ahmen Hussein, the night shift supervisor for cleaning. "We have to finish before the opening hour. Sometimes we only have five or six hours to do it. It's hard, but we like the challenge."

An even more arduous cleaning task sits just outside the malls doorstep. The Burj Khalifa Lake -- an 150m liter artificial body of water that also houses The Dubai Fountain -- requires daily maintenance, partly because the desert climate itches to contaminate it with sand.

"The job is to target the areas where we have the highest sand accumulation, and clean it in a systematic way," says Jean Hanna, director of operations for The Dubai Fountain. In addition to the human staff, there are underwater robotic vacuums employed to undertake the task.

Despite the manpower that goes in to running the mall, Alabbar concedes that even more can be done to ensure it lives up to its full potential:

Read: When the elevators don't work in the world's tallest building