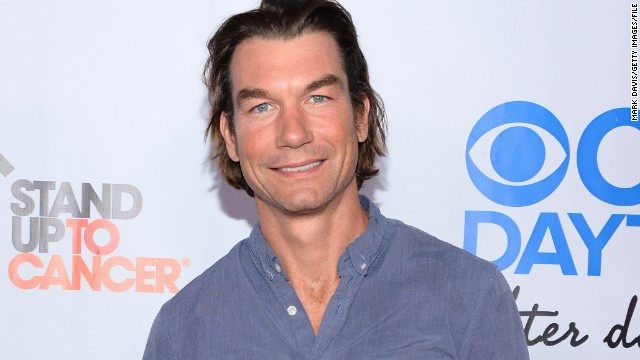 (CNN) -- Shia LaBeouf isn't the only sorry actor in Hollywood.

After the 27-year-old announced that he's performing in an art piece called "#IAmSorry" this week in Los Angeles, actors such as Jerry O'Connell and Emile Hirsch are turning LaBeouf's apologetic saga into a punchline.

On Wednesday, O'Connell actually opened his own exhibit right next to LaBeouf's called "#IAmSorryToo" for Funny Or Die.

BuzzFeed stopped by both LaBeouf's performance -- during which visitors take an "implement," such as a "Transformers" toy or bottle of cologne, into a small room where LaBeouf sits silently with a bag over his head -- and O'Connell's, and found that O'Connell could be guilty of plagiarizing LaBeouf's show.

Considering that LaBeouf is facing accusations of plagiarism with his "#IAmSorry" show anyway, O'Connell's rip-off of LaBeouf's exhibit is "is obviously the point," BuzzFeed notes.

Like LaBeouf, O'Connell's set-up involves a table of items that occasionally reference his career: where LaBeouf had nods to "Transformers," "Indiana Jones" and a copy of Daniel Clowes' book, "The Death-Ray," O'Connell included a DVD of "Stand By Me" and a toy kangaroo (2003's "Kangaroo Jack," anyone?).

But unlike LaBeouf, who never clarifies exactly what he's apologizing for, O'Connell was an open book. He, too, wore a paper bag over his head -- one saying "SUPER FAMOUS" instead of LaBeouf's "I AM NOT FAMOUS ANYMORE" -- but eagerly apologized for "all the world's ills" and even offered one guy a taste of his sandwich.

O'Connell explained to BuzzFeed that he wasn't doing it to upset LaBeouf -- in fact, he found the actor's exhibit pretty inspiring.

"Everyone's talking about it, whether you want to call it art or a real apology, it's hilarious," O'Connell said. "He's getting people talking. I'm all for this artsy gallery thing. It's fun to parody because all I have to do here is sit with a bag on my head, crying, and saying, 'I sowwy.' But I have to tell you; it's freeing to continually apologize like he does. I get it."

Emile Hirsch does too. The "Lone Survivor" actor went on a tweet-spree Wednesday airing all of his regrets.

"I AM NOT FAMOUS TO BEGIN WITH," Hirsch joked. "I AM BEGINNING TO FEEL SLIGHTLY MORE FAMOUS. ... I TAKE IT BACK, STILL NOT FAMOUS."

And then: "I AM...CONFUSED ABOUT HOW FAMOUS OR NOT FAMOUS I MIGHT POTENTIALLY BE...ANYMORE... I AM...ACCIDENTALLY ON CAPS."

Just in case LaBeouf thinks Hirsch is laughing at him instead of with him, the actor clarified that "IN ALL FAMOUSNESS THOUGH, I LOVE SHIA, WHETHER OR NOT HE'S FAMOUS. ... I AM SORRY I EVEN SAID SORRY. NOT GONNA LIE, I AM ONLY ABOUT FIFTY PERCENT SURE OF MY ORIGINAL (FIRST) SORRY."

All of these regrets makes us wonder: who do you want to see apologize next?