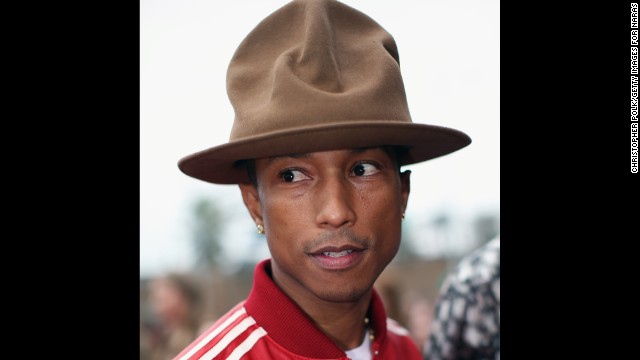 (CNN) -- If Pharrell Williams lived by Coco Chanel's rule and removed one accessory before leaving for the Grammy Awards Sunday, we all would have been worse for the wear.

The producer/singer/songwriter showed up in a hat that became the conversation piece on a night when the conversation should have been about the music. Somehow, Pharrell's hat out-performed Taylor Swift, Willie Nelson, Imagine Dragons and Kendrick Lamar combined.

When the artist first arrived on the red carpet, we couldn't wrap our minds -- nay, our eyes -- around what we were seeing.

The headgear seemed to be as tall as it was wide, and we couldn't tell if Pharrell was channeling Smokey the Bear:

Pharrell vs Smokey the Bear. who did it better ? pic.twitter.com/wlPHKIlt2H

This was really Pharrell inspiration for that outfit pic.twitter.com/iRkWMF1vpX

Or was just a devoted fan of Arby's.

"@sabzi: We're up all night to get roast beef @Pharrell pic.twitter.com/oQq9m5L4eZ" @GlynBrownTV

Y'all tryna start a roast beef? 😄😘 "@Arbys: Hey @Pharrell, can we have our hat back? #GRAMMYs"

must have hats to get lucky

In the end, what appeared to be a fashion faux pas turned into a style win by the end of the night.

Beyoncé's hair during her opening performance of "Drunk In Love"? That's another story.

The superstar took the stage with a short hairstyle of wet waves -- an obvious reference to the hair she wears in the music video for the song. But Twitter took one look at the water-logged locks and went wild:

We don't think Queen Bey suffered as much criticism as Madonna did, though. While the 55-year-old mom explained that her black suit, hat and cane were chosen by her son, David (who wore a matching outfit), that didn't make the armchair fashionistas any kinder.

But, for all the talk about their outfits, all three artists walked away with bigger accomplishments last night. Beyoncé stunned on the red carpet and off it with her performance, Pharrell walked away with the producer of the year (non-classical) Grammy award, and Madge helped marry off 33 couples -- yes, 33! -- during a performance of Macklemore & Ryan Lewis' "Same Love."

5 things we loved about the 2014 Grammys