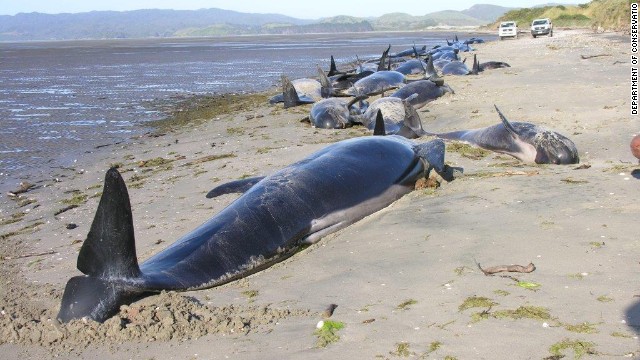 (CNN) -- Dozens of pilot whales have been rescued after they beached themselves along the shore of Farewell Spit on New Zealand's South Island on Saturday.

Fifty-three of the animals had been discovered along the beach after swimming up on shore, said John Mason with the New Zealand Department of Conservation.

Teams of volunteers successfully delivered 40 of the pilot whales back to deeper water, and most of them appeared to be fine, although 10 appeared to be still at risk and lingering near the shore, Mason said from Golden Bay.

"What we have is quite a large pod and we have had to chase them along," Mason said. "If they come back in we have found making human chains to splash and guide them to deeper water is the most effective way to help them to safety."

It's the fifth large-scale stranding in recent days at the bay, leaving at least 22 of the animals dead. Officials have been calling in volunteers with wet suits or boats to help the whales and monitor their path.

Mason said it is not unusual to have whales beaching themselves at Farewell Spit, a long hooked sandy area that forms the top of Golden Bay where the shallows appear to confuse the animals.