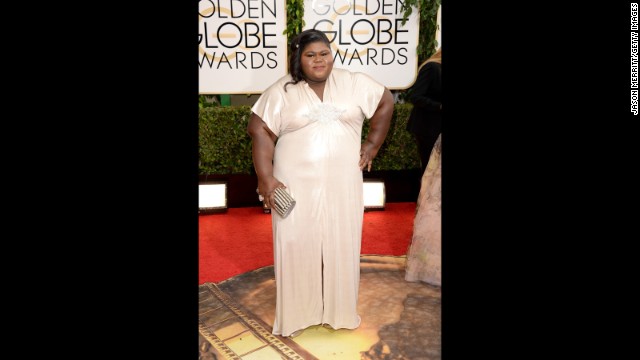 Gabourey Sidibe arrives on the red carpet at the 2014 Golden Globe Awards on January 12.
STORY HIGHLIGHTS

(CNN) -- Walking the red carpet is basically like walking a tightrope in front of your harshest critics, but Gabourey Sidibe has handled hers with class.

The 30-year-old "American Horror Story: Coven" star received nasty tweets about her appearance after she arrived at the Golden Globe Awards on Sunday, with some viewers taking offense to her shimmering floor-length gown.

The reactions ranged from sarcastic "is she pregnant?" tweets to demands for Sidibe's stylist to do better.

"Clearly Gabby's stylist doesn't like her and has no problem stealing her money," said one observer.

"I love Gabby Sidibe but she looked like the GLOBE at the Golden Globes," said another. "Who thought this was okay?" inquired a third, who included the hashtags "ImSurprisedSheCouldFitInTheFrame" and "#IThinkSheAteTheGoldenGlobes."

Sidibe caught wind of her haters after the show, and sent out a tweet that was quickly crowned The Globes Tweet that Won The Internet:

To people making mean comments about my GG pics, I mos def cried about it on that private jet on my way to my dream job last night. #JK

Obviously, she nailed it. The subsequent response to her smart, classy takedown has been just as positive as those initial dress-related tweets were negative, and has likely introduced a slew of newbies to her wit.

Yay! Everyone is so wonderful and supportive of my shade! This might be a problem down the line. Thank you! #notmyjetthough #imnotthatfancy

(For her fans, Sidibe's response is pretty typical -- they're used to her hilarity by now. "I seriously just busted my a** while boarding this plane but no one saw me!!! I feel like I've been given a second chance at life," she tweeted on January 4. "My underwear hurts..... Need more booze. Send help!" she joked on the night of the Globes.)

This isn't the first time that Sidibe has had to weather very public comments about her body.

After she was nominated for an Oscar in 2010 with Lee Daniels' "Precious," the conversation quickly turned to whether a woman of her ethnicity and shape could even find additional work in Hollywood.