Dozens of whales dead after getting stranded in New Zealand 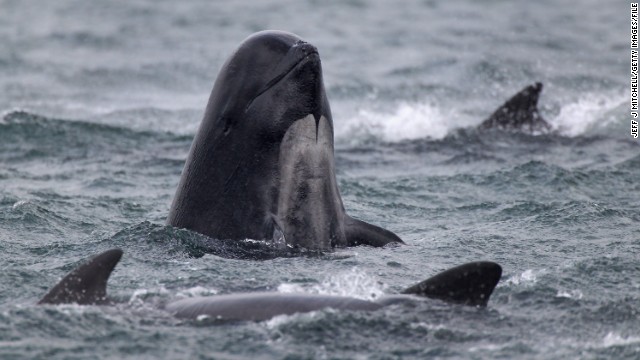 (CNN) -- Dozens of whales are dead after they got stuck on a remote beach in New Zealand, authorities said Monday.

The 39 long-finned pilot whales became stranded overnight on Farewell Spit, a narrow claw of land that juts out into the sea from the northern tip of New Zealand's South Island.

Twelve of the whales had died by the time they were found Monday morning. Conservation officials said they decided to euthanize the remaining 27 because the chances of getting them safely back out to sea were too slim.

"They have come very high onto the beach in a big tide," said John Mason, the conservation services manager for the area where the whales were found. "The big tides are now reducing, coming in further out from shore, so it would be difficult to get the large animals into deep enough water to refloat them."

He said that he and his staff had "carefully weighed up the likelihood of being able to refloat" the whales, but that they "determined that due to various factors it was unlikely they could be rescued."

"Rather than prolong the suffering of the remaining 27 whales, we decided to humanely euthanize them," he said in a statement.

Surrounded by oceans rich in marine life, New Zealand has one of the highest stranding rates for sea mammals in the world.

An average of about 300 dolphins and whales get stuck on the country's coasts each year, according to Project Jonah, a nonprofit group that aims to rescue and protect marine mammals.

Golden Bay, the area where the group of pilot whales got stuck, is known as a stranding hotspot because of its protruding coastline, gently sloping beaches and system of currents.

Pilot whales, which live offshore, are among the most vulnerable species to mass strandings in such conditions, according to the Encyclopedia of New Zealand.

But the number of whales that died on Farewell Spit this week pales in comparison with some of New Zealand's worst strandings.

In 1998, more than 300 pilot whales died after they got stuck in Doughboy Bay on Stewart Island, which sits off the south coast of the South Island.

New Zealand's worst ever stranding took place in 1918, the Encyclopedia of New Zealand says, when around 1,000 pilot whales got marooned on Long Beach in the Chatham Islands, which are situated hundreds of kilometers off the country's east coast.