(CNN) -- It lit up the world and showed us all our way. It served presidents, princes, and paupers with equal alacrity. It brought the writings of Yeats, Joyce, Rowling, and Trudeau to millions of bed-readers, and helped countless people around the world avoid stubbing their toes in the dark.

Farewell, traditional light bulb. As the clock strikes midnight, the light dims on your reign as the mechanical illuminator of human existence.

This was no sudden death. The diagnosis came in years ago, in 2007, when President George W. Bush signed a law to replace standard incandescents with more efficient bulbs. Much more. Only about 10% of the energy these traditional bulbs use is for light, the Environmental Protection Agency says.

Seventy-five- and 100-watt bulbs were already banned this year. The ban on production of 40 and 60-watt bulbs -- the most popular in the country -- kicks in as 2014 begins.

"There are 4 billion light bulb sockets in the U.S. and more than 3 billion of them still use the standard incandescent technology that hasn't changed much in 125 years," the EPA says. "A standard incandescent is only 10% efficient -- the other 90% of the electricity it uses is lost as heat."

It's the dawn of a new day. Taking over the limelight now: halogen bulbs, compact fluorescent bulbs, LED bulbs and high efficiency incandescents.

While CNNMoney has covered the business behind all this, as well as the battle over whether it's a sign of too much government meddling, on this New Year's Eve, we're left with the sad sense of saying goodbye to you, sweet standard -- but also the knowledge that your legacy will irradiate our world, brighter than ever.

Born in 1803 or later, depending on how you measure it, you, in all your transformational beauty, were raised by more parents than we could name -- Humphry Davy, James Bowman Lindsay, William Sawyer, Albon Man, Joseph Swan, and, of course, Thomas Edison, the Energy Department notes. While, unlike President Barack Obama, you have no birth certificate, we will always treasure Edison's patent of you from January 27, 1880.

And we find solace in knowing that he just might be glad to see you exit gracefully, making way for the next generation. 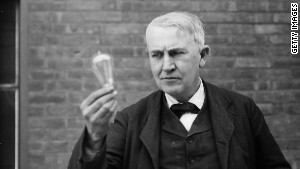 "Thomas Edison was a patriot, he was a futurist, and he was green. Edison's concern after the turn of the last century was with pollution and nonrenewable resources, not with freezing technological change at the level of 1879," David Edward Edison Sloane, Thomas Edison's great grandson, wrote for CNN.com under the headline, "Edison would've loved new light bulb law."

Still, some aren't quite as ready to let go. And, in a way, they won't have to. As with all laws, there are some loopholes. Three-way standard incandescent light bulbs will still be made. Yes, we live in an era of space stations, blazing fast computers, and access to just about any piece of information we need. But no one can take away the glory of that click-click-click you give us in our hotel-room lamps.

So, for those who just can't quit you yet, some enterprising shop owners have a plan. "Any regular lamp, you can change it from an on-and-off to a three-way, and we do it for our customers here," Doug Satterfield, owner of Rollier's Hardware in Mount Lebanon, Pennsylvania, told CNN affiliate KDKA.

But in the not-so-long run, we know, your gleaming presence in our lives is fading.

Today's children won't know you as previous generations did.

At CNNMoney.com, a commenter calling himself Mudbone Willie posted his concern -- and received hundreds of "upvotes" for it. "Great. I do all of my baking in a small oven that uses a light bulb at its heat source. Now what?"

Worry not, Mudbone Willie. The Easy-Bake oven has changed with the times.

"No more light bulbs needed!" Hasbro says in its ad for the Easy-Bake Ultimate Oven. As greenbiz.com reported, Hasbro revised its classic in response to the new law.

The new lights taking over our lives will surely bring joy and less wasted energy -- perhaps a beautiful new beginning.

Still, on two of life's most pressing questions, we remain in the dark:

What will happen when a cartoon character gets a great idea?

On this, Fortuna Lee offers some suggestions.

.@Fortunalee offered this answer to my question, via @bitstrips. #LoveIt pic.twitter.com/ji5hujwYKW

And, finally, how many psychiatrists/lawyers/programmers/med students/economists/surrealists will it now take to change a light bulb?

Oh, there are new ones that look the same? Problems solved.

Here's to you, standard incandescent light bulb. May the fireworks that light up the skies this evening give you the blazing sendoff you deserve.