'The Voice' crowns its winner 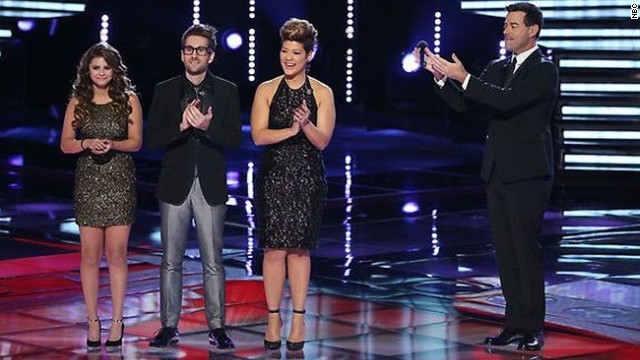 The finalists on "The Voice" were, from left, Jacquie Lee, Will Champlin and Tessanne Chin, seen here with host Carson Daly.
STORY HIGHLIGHTS

The country star had picked "The Voice's" top talent for three seasons in a row, but on Tuesday it was Adam Levine who beamed with pride as his finalist, Tessanne Chin, sealed the win.

The 28-year-old songstress from Kingston, Jamaica, triumphed over third-place finalist Will Champlin and runner-up Jacquie Lee, with her performance of Whitney Houston's "I Have Nothing" on Monday night's show being the icing on a season of top-notch performances.

After her big win, Chin was left in "just complete and utter shock," she told CNN.

"Those moments you're standing there waiting for (host) Carson (Daly) to say your name are torture. I remember just thinking, 'God, it's up to you now,' " Chin said.

The burgeoning star's family was present to help her celebrate, a show of support that Chin said meant "the world" to her.

"My mom has been there through thick and thin. She's been the one taking me when I was younger -- going all around the world with me, staying up all hours, she's always been by my side. She watched 'The Voice' from England. She stayed up late to watch it on the Internet. And to have my husband there was also just amazing."

For her coach Levine, seeing Chin win was a special moment -- maybe even one of the best moments of his life.

"Beating Blake is a feeling that I relish and enjoy so much," Levine said after the show. "People talk about the best moments of their lives: having kids, getting married, whatever it is ... but one of the best moments of my life so far, only to be trumped by marriage and children, is beating Blake Shelton on 'The Voice.' He deserved to lose this year. He's won three in a row and that's too many."