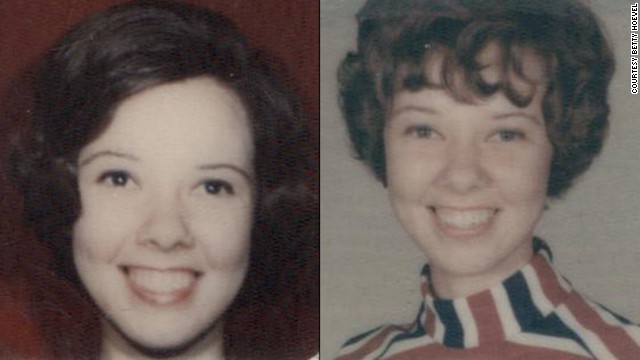 Betty Hoevel, the author's mother, in 1968 and 1970, achieved these hairstyles with wire brush rollers, gel, teasing and lots of hairspray. Click through the gallery to see more retro hairstyles. 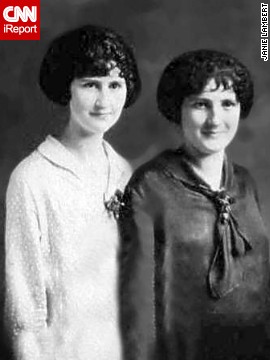 iReporter Janie Lambert from Hughesville, Maryland, says good hair runs in the family. Her aunt was a hair stylist for years and her great aunt worked a beauty shop. She shared this image of her grandmother, right, and great aunt from "the mid '20s or early '30s," she said. "They were inspired by movie stars and celebrities, especially the flapper era, silent movie." 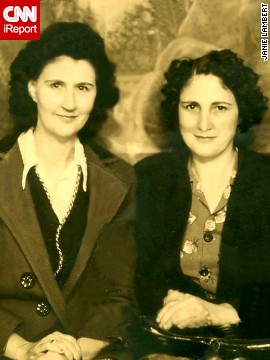 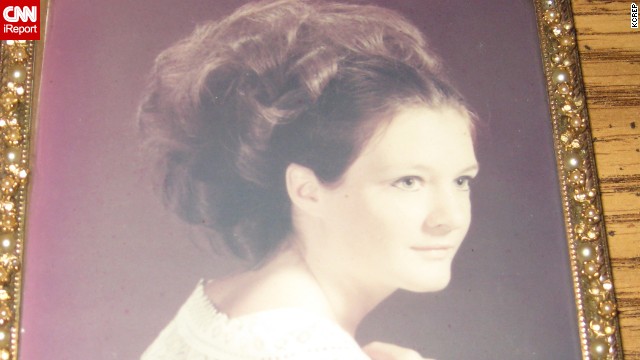 iReporter Kathi Cordsen from Fullerton, California, sent in this photo of her own hair from the 1960s. "Big hair was pretty much the fad in the '60s where I grew up in California. The higher, the better," she said. 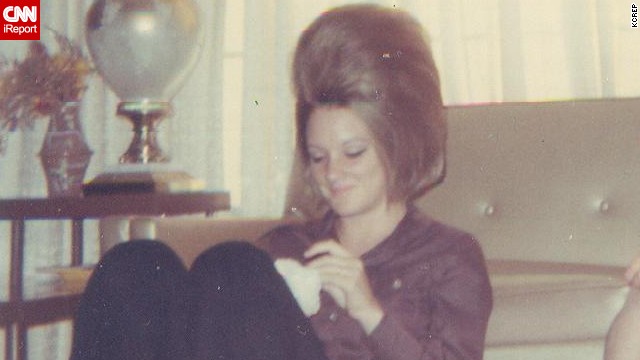 Cordsen shot this photo of her sister Judy in the late 1960s. She described her sister as a teenage "lowrider," adding that the car you rode in was just as important as your hair. 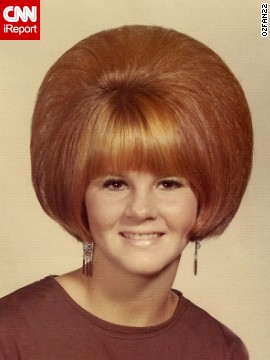 iReporter Denise Ramirez sent in this photo of herself from 1969, when she was a sophomore at Norwalk High School in Norwalk, California, she said. "Creating this do took a lot of work. The main thing was getting the Aquanet buildup." 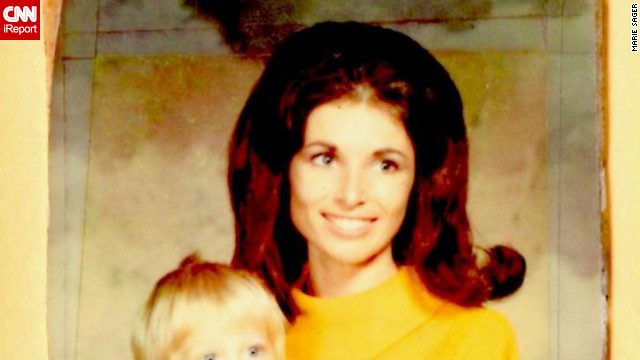 I was sorting through old family photos with my mother, deciding which to scan for posterity, and there in my hand was her student ID card from Rice University. On it was a small picture of Mom, flashing her familiar grin.

I didn't need the date above her picture to tell me this was from 1970: She was wearing a stripy mockneck shirt that can only be described as, "incredible," with a hairdo that defied both Houston's humidity and her naturally fine, straight hair.

"How on earth did you do that?" I asked her.

She laughed, with some embarrassment, and said that was a bad hair day. We kept digging and found another photo of her this time from 1968. It showed Mom with a perfectly teased, curled-at-the-ends bob so prim and proper she could have gone straight out to a cotillion.

By this time, Mom was laughing hysterically. "What's so funny?" I asked, but she just kept laughing.

It was only when I spoke with John O'Neill of the Empire Education Group, one of the country's oldest cosmetology schools, that I realized I had no chance of understanding why my mom was wrapped in hysterics at the sight of her old photos.

Pin your favorite retro looks from our Retro hair! Pinterest board.

My own arsenal of flat irons, root boosters and Moroccan oil serums could never let me achieve the architectural feats of Mom's old hairdos, he explained.

First off, Mom was working with hair products that had limited capabilities, he said. There was a chemical revolution in hair products during the 1970s and '80s that allowed hairdressers to achieve the kinds of styles that had previously relied on perms, such as the poodle cut, O'Neill said.

Girl's dreadlocks not allowed in school

While modern products today emphasize shine and natural textures, he said, many hairstyles from the late '60s and early '70s were anything but natural.

In fact, Mom achieved her 'dos with a regimen that sounds like a James Bond torture scene. She started with washed and towel-dried hair. Then she sectioned her hair and slathered it with Dippity-Do.

Whimsically named hair gels were not the only products women used to help style their tresses, said fashion historian and the author of "How to be Adored: A Girl's Guide to Hollywood Glamour" Caroline Cox. Sometimes beer was used for volume and shine, lemon juice for bleaching or lightening hair color -- even eggs were used for a conditioner, she said.

Once her hair was thoroughly gelled, Mom used wire brush rollers to roll her hair into curls. "They were held in place with plastic, pink toothpick-looking things with a tiny knob on one end and a point on the other," she said. O'Neill noted that in order to create some of the still-voluminous but straighter hairstyles of the '70s, women would also roll their hair around beer cans or Coke cans.

Next she donned a bonnet hairdryer, an "inflatable turban with hot air blowing through it," Mom said. Thirty minutes under the dryer was Mom's max, but some women could stay under the dryer for up to an hour, if their hair was long and thick.

"Once your hair was dry, the rollers came out and you brushed it," she said. "Then you teased the hair where you wanted volume and brushed over the teasing to create a shape. I did the bangs by hand."

Next, a finely coiffed lady would practically gas herself with hairspray so the hair never moved again. O'Neill remembers the clouds of hairspray in the salon where his mother got her hair regularly styled into a Marge Simpson-esque beehive in the mid-'60s.

Mom said she washed her hair every other day back then. "In between, I would put my hair in pink foam rollers at night, repeating the process of styling in the morning," she said. "Some people who had more elaborate hair would wrap gobs of toilet paper around their heads and sleep that way."

Then Mom regaled me with legends of people who never combed the teasing out of their hair and just kept spraying it with hair spray -- inadvertently creating the perfect gestation area for "things that would grow on their scalp."

"The main thing was getting the Aquanet buildup," said the native Californian. "I would wash my hair on Sunday, roll it and start the process. By the (next) weekend, it was just the way I wanted it. I ratted it, sprayed it and then combed, then sprayed again."

"My old sister had the same hairdo, so it took us about 30-40 minutes in the bathroom every morning," she said. "This photo has been used on greeting cards and in a commercial in the UK. Crazy that the hairstyle we took for granted back in the day is now something of an oddity."

Dirty hair took the shape of a bubble 'do or bouffant better than clean hair, said Cox. Women would often go to a salon once a week to get their hair washed and set, she said, and that was the only time their hair was washed.

"I can remember my grandma had a perm every six months, had a wash and set once a month and brushed her hair with Vitapointe at home," Cox said. "Attitudes to hair cleanliness were very different."

When O'Neill began his career as a hairdresser in 1976, he said, his main duty was washing clients' hair, which he would have to do three and four times on each person in order to strip off the hairspray and scalp oils.

The advancements in stylists' hair-cutting capabilities and hairstyling products have made it so that modern women can achieve a hairstyle with a lot less effort, he said. But despite all that innovation, if someone went to salon today and asked for my mom's teased-out and curled-up hairdo, he said, she likely couldn't get it.

That's because many older styles aren't taught in cosmetology schools. Rather, "it's up to the older hairdressers to teach the younger hairdressers how to do this," he said. Even when older styles experience a resurgence, like finger waves recently did, the hairdressers O'Neill trained didn't know where to start.

"Most young dressers, under the age of 25, probably don't have a curling iron. They can curl the hair, but they use a flat iron," he said. "There are certain things you can do with a curling iron that you can't do with a flat iron." Thus, the achievement of older hairstyles is becoming an irretrievably lost art.

African-American hairstylists may be best at passing down their knowledge, he said. "If you look at dreads, twists, plaits, braids, all that, they are hundreds and hundreds of years old. And they pass it down through doing their children's hair," he said.

"You probably remember (in the '70s) when the Bo Derek (braid) look became big. At that point in time, if you were in the hair industry, we had to ask the ethnic population to come teach us how to do that," O'Neill said.

With a real understanding of Mom's old hair rituals out of my reach thanks to progress, I wondered, did she ever experience the shock and wonder her unfamiliar hairstyle gave me?

"The exploding bangs you girls had (in the '80s) were really awful," she confessed.

Whatever, Mom. My bangs were Kooshball-perfect.