Part of complete coverage on
Le Web
SHARE THIS

From Star Trek to Siri: How the Machine-Reading Revolution will dictate the future 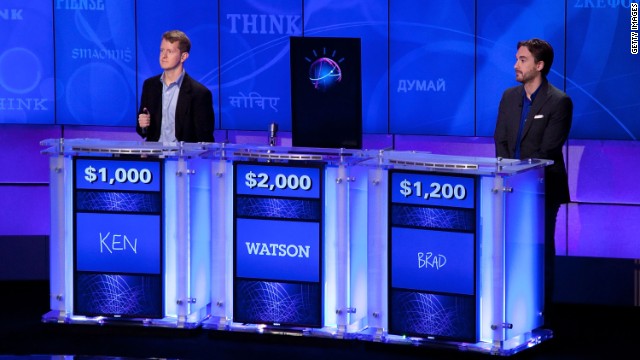 IBM's Watson system defeated the human champion on "Jeopardy!" in February 2011, surprising the world. Now, a "Machine-Reading Revolution" is underway. 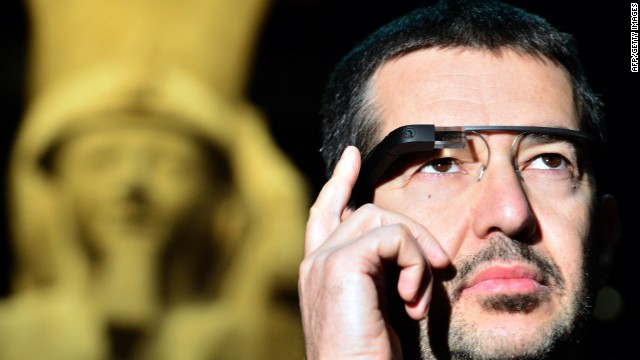 Google Glass may seem futuristic now, but could soon be used in everyday life. It has a miniature projector, touch controls and voice commands that sit on your eyes and ears like glasses. That setup allows wearers to interact and engage with information and the world around them without having to pull out a phone. 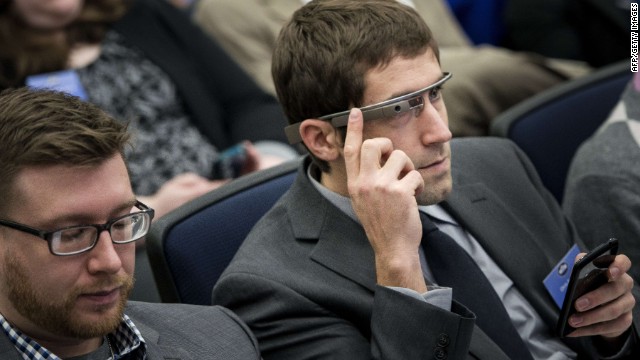 Here, an attendee uses Google Glass during the White House Youth Summit at the White House. U.S. President Barack Obama was speaking to the group about healthcare. 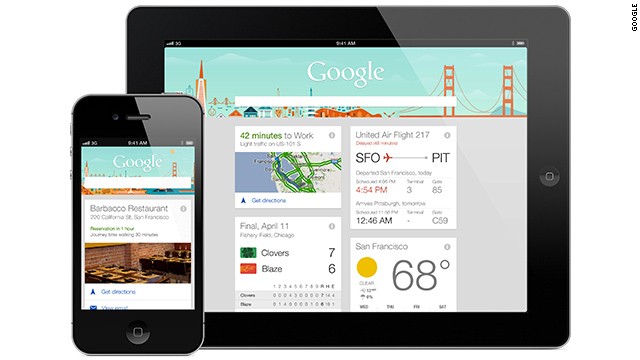 Google Now is a personal assistant which delivers customized information it predicts you will want, such as the weather, traffic conditions and the performance of your favorite sports team. 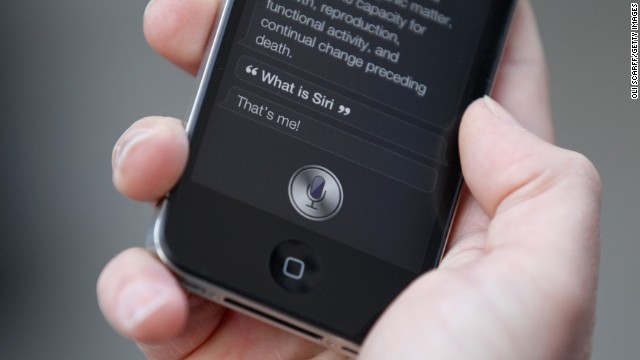 Siri's voice recognition technology was seen as a first step to creating a highly personalized assistant. The questions answerable by such technology is expected to explode, with answers automatically extracted and synthesized from news, web pages, and tweets. 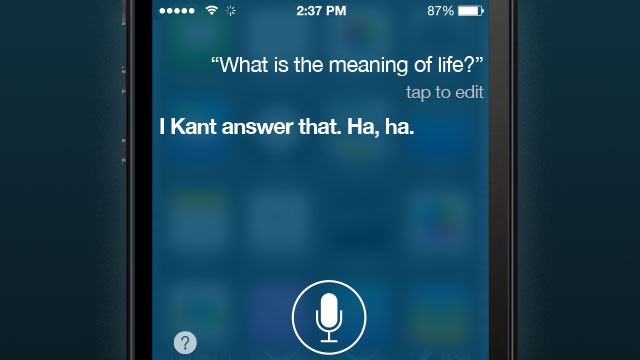 (CNN) -- When IBM's Watson system defeated the human champion on "Jeopardy!" in February 2011, it surprised the world with its unprecedented command of a vast array of facts, puns, and clever questions.

But how will that feat change our lives over the next decade? What does it mean for the future of intelligent machines?

Watson accumulated its wide-ranging knowledge by "reading" the equivalent of millions of books, foreshadowing a revolution in how computers acquire, analyze, and create knowledge.

Given the explosive volume of text available to anyone today in the form of web pages, articles, tweets and more, automatic machine reading is a critical part of technology's future.

Here are five ways we predict the Machine-Reading Revolution will change your life in the coming decade:

1. Being a scientific assistant: By 2020, machine reading and understanding of scientific text has the potential to accelerate breakthroughs like helping find new cures to diseases or solutions to climate change.

The Allen Institute for Artificial Intelligence's Aristo project is building software that will enable computers to "learn" from textbooks, ask questions, and draw tentative conclusions. Building on this, and related projects like Watson, this kind of assistant will become an indispensable tool for scientists and researchers.

2. Answering questions: When you ask your smartphone a specific question like "when's the next flight to Atlanta?" or even "what's President Obama's current approval rating?" You'll be able to receive direct and concise answers on your device.

Programs like Siri and Google Now can already answer spoken questions like "when's the next Yankees game?"

Over the coming decade, the range of answerable questions will broaden substantially, and the answers will be based not only on databases of facts, but also on information automatically extracted and synthesized from news, web pages, and tweets.

Thus (as Etzioni anticipated in 2011): On our phones, ten blue links will gradually become a thing of the past.

3. Being an online shopping concierge: We foresee an automated concierge that makes personalized product recommendations based on your tastes and reading all available reviews on the Web.

Today, if you want to find a quiet hotel in mid-town Manhattan, you may be forced to spend hours combing through hotel reviews to figure out which ones are relevant, authentic, and informative.

It's only a matter of time before shopping excursions are truly one-click endeavors.
Paul G. Allen and Oren Etzioni

In just a few years, a computer will comb through the reviews for you. Research prototypes like Huang and Etzioni's RevMiner have already shown that computers can read and analyze reviews with high accuracy.

It's only a matter of time before shopping excursions are truly one-click endeavors.

4. Acting as an automated medical assistant: Imagine getting an immediate "second opinion" based on the latest medical studies and experiments right in your doctor's office, or even in the comfort of home.

'I provided the voice of Siri'

Today, any doctor is overwhelmed by the deluge of new medical studies and discoveries.

Ticketed for driving with Google Glass

By 2023, your doctor will have a tireless medical assistant who keeps up with the scientific literature on his or her behalf, and warns against potential errors such as unnoticed drug interactions, dangerous side effects, and more.

5. Delivering real-time statistics: Within a decade, authoritative statistics on health, inflation, and unemployment will be available in real-time, benefiting both policy makers and the general public.

Today, we often find out about the outbreak of epidemics, health hazards, and economic concerns long after the fact. Yet status updates on social media can reveal important clues about our location, community health, and even employment status immediately.

Research is underway to anticipate epidemics and address other public health questions that today are studied via surveys and slower, less-inclusive methods.

Within a decade, authoritative statistics on health, inflation, unemployment will be available in real-time
Paul G. Allen and Oren Etzioni

In the near future, approximations to official data will be available instantaneously.

We recently launched the Allen Institute for Artificial Intelligence (AI2) in Seattle to carry out basic research in the area of machine reading and understanding of text, which will enable the broader community to pursue the above innovations.

Within a decade, computer knowledge acquired from "Big Text" will be available at any time, any place, and accessible via a dialog that would make the Star Trek Communicator proud and put Siri to shame.

As Allen observed in 2011, the singularity is far beyond the horizon, but the Machine-Reading Revolution is coming to a mobile device near you.

The opinions expressed in this commentary are solely those of Paul G. Allen and Oren Etzioni.

Space tourist Mark Shuttleworth on Nelson Mandela's legacy, and why our future is in the stars.
D'Aloisio: Yahoo's teen star
updated 5:23 AM EST, Thu December 12, 2013

The smart phone has revolutionized our personal and professional lives. And it's going to keep changing.
Revolution is underway
updated 4:09 AM EST, Wed December 11, 2013

There's a revolution coming to a screen near you -- and it's going to change your life. Microsoft co-founder Paul G. Allen and entrepreneur Oren Etzioni reveal what to expect.
Kurzweil: This is your future
updated 3:53 AM EST, Thu December 26, 2013

Acclaimed futurist Ray Kurzweil on the future of human life -- one where we print organs and play in total immersion environments.
Le Web's Next Ten Years
updated 11:45 AM EST, Mon December 9, 2013

Ten years ago we were carrying flip-screen mobiles, Evanescence was top of the charts and just 11.4% of the world was online. How things have changed.
Siri says 'dump him'?
updated 11:11 AM EST, Tue December 10, 2013

The Web will change our lives dramatically over the next decade. But could mobile devices tell us when to break up?
Previously, at LeWeb Paris:
Controling tech with your mind
updated 9:38 AM EST, Tue December 11, 2012

It's the $199 headband that will allow you to control things using your mind, say makers.
'The Google problem': Key to Internet success
updated 10:44 AM EST, Thu December 6, 2012

Many of Europe's leading tech entrepreneurs are meeting at the annual LeWeb conference in Paris this week to celebrate the future - an "Internet of things" governed by intelligent devices.
From iPhones to thermostats
updated 5:50 PM EST, Wed December 5, 2012

CNN talks to the "podfather" Tony Fadell, the man behind Apple's iPod about his new product -- an intelligent home thermostat, Nest.
ITU meeting 'no threat to free speech'
updated 8:50 AM EST, Wed December 5, 2012

Communications are a foundation for the social and economic opportunities that everyone deserves, writes Dr Hamadoun I Toure for CNN.
Are we turning into cyborgs?
updated 12:07 PM EST, Wed December 5, 2012

Amber Case argues that humans are becoming cyborgs because of how much we interact with technology.
Just what is the 'Internet of Things?'
updated 12:18 PM EDT, Tue June 4, 2013

The future has arrived and it will be run by our devices. But how will it work and what should we expect?
What it means to be a digital native
updated 6:47 AM EST, Sat December 8, 2012

The war between natives and immigrants is ending. The natives have won.
China's to lead Internet of Things tech?
updated 8:39 AM EST, Mon December 3, 2012

When James Law looks in the mirror he sees weather reports, e-mails and his heart rate. The concept, Internet of Things, is developed in China.