Part of complete coverage on
100 Ways to Travel Better 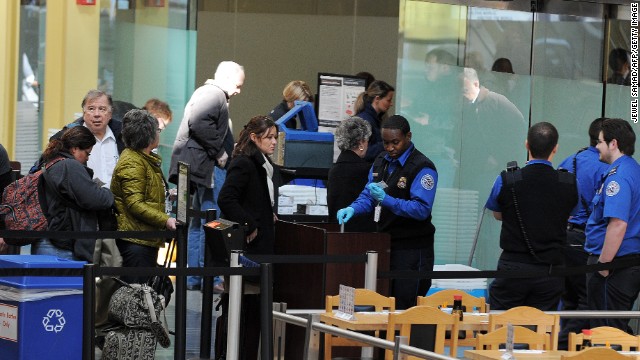 Prepare for lines at airports across the country this Thanksgiving as stormy winter weather hits.
STORY HIGHLIGHTS

(CNN) -- It's never easy, but toss in a heaping helping of bad weather and the Thanksgiving rush devolves into gridlock.

Nearly 44 million people are trying to get somewhere this Thanksgiving, according to AAA projections. With a little luck, some patience and planning, they'll make it to their final destinations in time for turkey.

#ATL24: The invisible army behind the world's busiest airport

Here are some tips for making the most out of a sticky travel situation:

Check your flight, no matter where you're going. Think you don't have to worry about bad weather because you're flying from sunny California to sunny Florida? Not so fast. That airplane you're picking up in San Diego may have been coming from Minneapolis or Chicago. If your aircraft is coming from a city hit by foul weather, it can hold up your warm weather travel. Check your aircraft's journey on your airline website, or Aviation Queen travel blogger Benet J. Wilson recommends the Flightview app to track your aircraft's path. And don't rub it in to the snow-bound folks that you're heading to the beach.

Don't drive into a storm. Monitor your local and regional forecasts. If the weather report in your departure or arrival city advises staying put for safety reasons, consider not hitting the road for Thanksgiving. If there's a possibility that bad weather could hit while you're on the road, make sure to have cold weather clothing and shoes, extra water and snacks, charged up devices, diapers for the little ones, a full tank of gas and flares in case you get stopped by weather.

Rebook your flight for free. Some airlines have issued waivers for some Thanksgiving weekend flights. Many airlines have teams devoted to tracking the weather and rearranging flight schedules to avoid bad winter weather. If the weather proves too dangerous for flight, airlines often offer customers the opportunity to rebook their flights to leave earlier or later free of charge, before you leave for the airport. Sometimes, the airlines will even waive fees to rebook customers who see the writing on the wall and call before the bad weather hits. No guarantees, but it's worth a try, said Airfarewatchdog President George Hobica.

Charge your devices. Expect crowds surrounding the electrical outlets at your departure airport to increase if your flight is delayed. And don't expect rest stops to share their outlets with you. Have a car charger and stash a power pack or a few battery chargers for your portable electronic devices (useful for driving or flying).

Don't press the new FAA electronics rules. Your aircraft will probably be packed, and flight attendants will be busy helping infrequent travelers get settled into their seats. Yes, you know have the right to use your iPads and other portable electronics devices in airplane mode below 10,000 feet on some flights. But not every airline has gotten FAA approval, and you don't want to argue with your flight crew during this week of all weeks. (Remember, you might not be working this holiday week, but they are. Be nice.)

Phones on a plane: To talk or not to talk?

Stock up on snacks. Stock up on non-perishable snacks and drinks for the car (if you're flying, avoid the drinks, but carry an empty water bottle to refill after you clear airport security). Granola bars, beef jerky, dried nuts and fruit and other protein-rich snacks can keep you and the children going without spending a fortune at rest stops or the airport.

Are you already stuck at the airport? If you're stranded, multi-task. Don't only go to the ticket counter. Use the NextFlight app and type in your city pair to get the next flights for the major airlines, travel blogger Wilson suggested. Then, call the airline on your cell phone and give them your preferred options. You might get booked on another flight before you reach the front of the line. (Also consider nearby cities where you can rent a car and drive to your final destination.)

Stay home next year. Travel experts Wilson and Johnny "Jet" DiScala are staying home for Thanksgiving this year, and every year they can. "I try to not travel on Thanksgiving," said DiScala, who flies more than 100 times per year but stays home in Los Angeles on Turkey Day. "There are so many rookies out, a lot of first-timers at the airports. The planes are completely packed, and it's expensive."

Wilson prefers not to risk it. "With Mother Nature, you never know what's going to happen," she said. "The airlines can only do so much."

Part of complete coverage on
24 hours in world's busiest airport
ATL24: A day in the life

For 24 hours, we made the world's busiest airport our destination and found a world unto its own. Join us on our journey. What you see will surprise you.
Timelapse: Busy runways
updated 10:58 AM EST, Thu November 21, 2013

Watch hours turn to seconds at the world's busiest airport.
Big moments on the move

A bittersweet blend of joy and heartache is all too common at the world's busiest airport, where moments of love and loss are carried like precious cargo and unwieldy baggage.
No ticket to ride, nowhere else to go

Amid the travelers and workers are those who don't belong — especially after midnight, when the airport gets quiet. Police and medics offer compassion along with a firm hand.
Timelapse: Dusk to dark at ATL
updated 6:43 PM EST, Wed November 20, 2013

Watch hours turn to seconds at the world's busiest airport.
They make the airport work

They clean the floors and toilets. They serve you that much-needed drink between flights, and then release you to those who ferry you safely through the air.
Awkward farewells and heartfelt hellos

Departures and arrivals create little bursts of fanfare. And at ATL, where most travelers are changing planes, time-killing strategies are varied. Airport spa or whiskey shots, anyone?
Your life and luggage are in their hands

They clear planes for takeoff, track storms and make sure that package you ordered arrives on time. Once you meet them, you'll never look at an airport the same way again.
Place of peace shaped by time of war

Troops made the airport a military crossroads. Now, it's a spot where recruits meet before going to basic training. Their mission is the same, though: Keep America safe.
Searching for what doesn't belong

Fish in a suitcase, a cow's head and a giraffe bone — oh, and don't forget the guns, bugs and drugs. Officers and dogs sift and sniff travelers' bags for contraband and explosives.
Life of one plane

It will make six flights in 12 hours, cover 1,800 miles and carry 500 passengers, four pilots, six flight attendants -- and two reporters. Oh, the stories this 717 could tell!