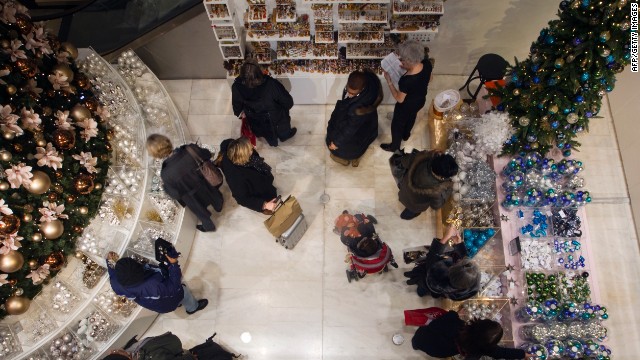 When should stores start the Christmas season? Before or after Thanksgiving?
STORY HIGHLIGHTS

(CNN) -- Thanksgiving is a week away, but it's hard to focus on the annual feast with all the ads for Black Friday sales and the Christmas decorations that have popped up everywhere in the past few weeks.

Everywhere, that is, except Nordstrom.

The department store is continuing its tradition of closing on Thanksgiving Day, even as retail giants like Macy's, Walmart and Toys R Us plan to open that evening and Kmart's doors will open at 6 on Thanksgiving morning.

You also won't see any Christmas decorations or hear any carols in Nordstrom stores until after Thanksgiving.

"We won't be decking our halls until Friday, November 29. Why? We just like the idea of celebrating one holiday at a time," the signs outside the stores read.

The store has been posting these signs for at least 20 years, judging by news reports dating back to 1992. And it apparently never gets old. CNN affiliate WWBT-TV in Richmond, Virginia, posted the sign on its Facebook page on Wednesday and invited followers to "share if you agree."

Commenters mostly supported Nordstrom's decision, saying, "Thanksgiving is a time to share with your family," and praising the store for "going against the grain." Others pointed out that some Nordstrom employees would still have to work on Thanksgiving to decorate the store and get ready for the Black Friday sales.

What do you think? Should stores close on Thanksgiving or do you like getting a head start on your shopping? When should Christmas decorations go up? Let us know in the comments below.