Part of complete coverage on
Going Global
SHARE THIS 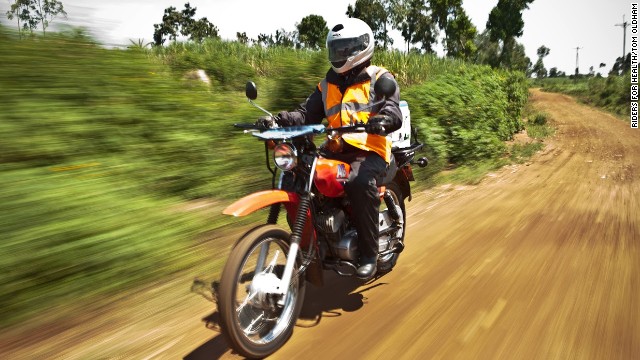 Joel Otieno, a clinical health assistant at the FACES community-based organization in Kenya, rides to his next appointment. He is supported by an organization called Riders for Health, founded by Andrea and Barry Coleman, who share a passion for motorcycles. Through the racing world, they became involved in fundraising for children in Africa and soon recognized the vital role of transportation in providing health care. 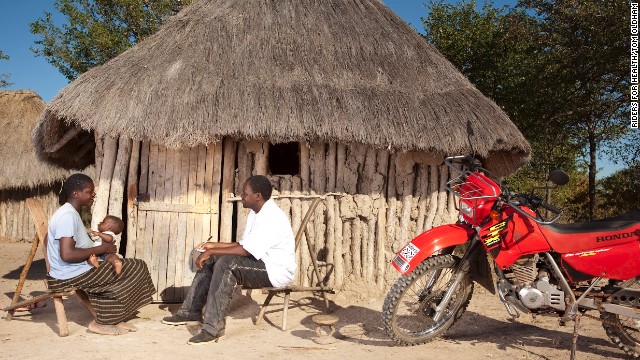 Palikobila Mwembe, an environmental health technician in the Binga district of Zimbabwe who takes part in the Riders for Health program, talks with a mother about her baby. 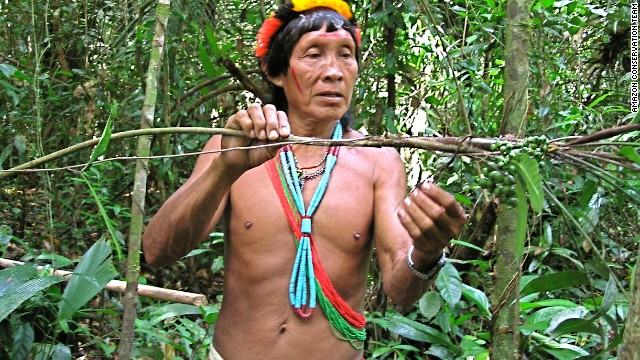 Amasina, a shaman from the Trio tribe on the Suriname-Brazil border, collects medicinal plants. Mark Plotkin and Liliana Madrigal, a husband-and-wife team, have spent much of their lives preserving the Amazon region and the culture of its indigenous inhabitants. Together, they created the Amazon Conservation Team, which helps empower the indigenous peoples of the Amazon to protect their rainforest homes. 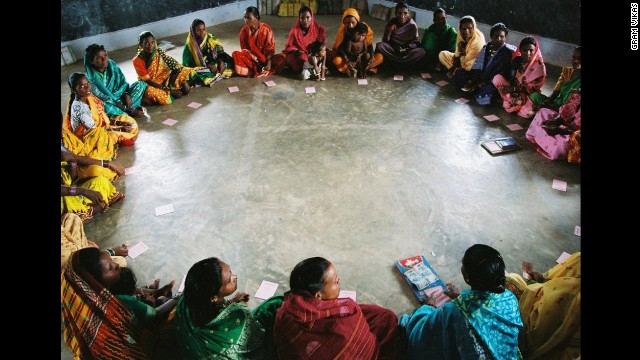 Members of a self-help group organized by Gram Vikas meet in Mohulpalli village in the Bargarh district of Orissa, India. Gram Vikas is a nongovernmental organization that was drawn to Orissa in the 1970s to help communities that had been ravaged by a cyclone. Executive Director Joe Madiath originally focused on providing renewable energy for rural communities, building more than 54,000 biogas units. Over time, the group has championed a more holistic model of development, based on Madiath's conviction that healthy living practices and improved quality of life are necessary before total development can occur. 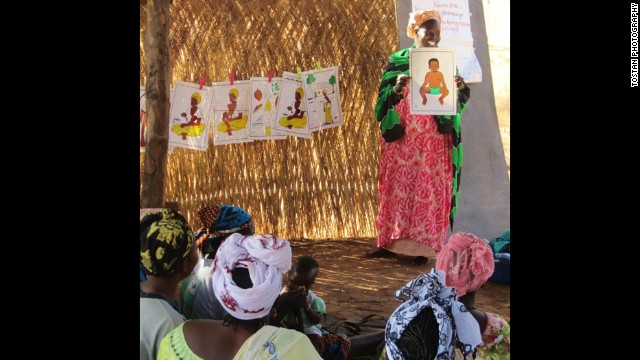 Editor's note: This is the first in a series of CNN Opinion pieces on people who are finding new ways to help solve the world's biggest problems. The founding president of eBay, Jeff Skoll is a philanthropist and founder and chairman of the Skoll Foundation, Participant Media and the Skoll Global Threats Fund, organizations aiming to help build a sustainable world of peace and prosperity. Sally Osberg is President and CEO of the Skoll Foundation, which produces the Skoll World Forum on Social Entrepreneurship.

(CNN) -- Motorcycle racer Andrea Coleman and her journalist husband, Barry Coleman, couldn't forget what they saw during a trip to Somalia in 1986: hemorrhaging patients being carted to clinics in wheelbarrows, rusting vehicles abandoned by the side of the road, community health workers making their rounds by foot.

What all this signaled to the Colemans was a delivery system in deep disarray. It wasn't simply the medical supplies that were lacking -- vaccines, for example, or bed nets -- but more mundane basics such as oil filters and lug nuts, along with the mechanics and maintenance protocols required to ensure transport that was fully functional.

As racers, the Colemans knew what it would take to build such a system. Upon returning to England, they got cracking, eventually mortgaging their house to found Riders for Health.

From food insecurity to lack of access to health care to growing environmental threats -- if we're going to solve the world's most pressing problems, we need social entrepreneurs like the Colemans every bit as much as we need great institutions and great global leaders.

As European Union architect Jean Monnet put it, "Nothing changes without men; nothing lasts without institutions." Working on the front lines, social entrepreneurs fight disease, poverty and injustice with their innovative approaches, proving that health care can be delivered efficiently and equitably, that sustainability trumps depletion, and that we're in this together.

We need these change-makers; we need their agency -- the creativity, discipline and drive they bring to challenges confronting humanity and the planet. But what is it more specifically that makes them so distinctive and so indispensable?

Both aim, in effect, to disrupt a status quo they see as sub-optimal. To the business entrepreneur, this might be a product or service that doesn't work terribly well, but offers customers their only choice.

Consider, for example, the limited, inefficient and unreliable options available for document or parcel delivery before Fred Smith's FedEx came on to the scene.

To the social entrepreneur, the challenge at hand doesn't only cause inconvenience or inefficiency; it causes outright harm, with that burden falling most heavily on poor and marginalized populations. Think of the millions who die miserable deaths from contaminated water in developing world countries, the victims of non-existent or dysfunctional sanitation systems.

Now consider what's required to address misery at this scale, with 2.5 billion of the world's population lacking access to a secure, safe supply of clean water.

What may come most readily to mind are thousands of social service provider organizations dispensing bottled water or boring new wells. Such nongovernmental or civil society entities play a vital role in ameliorating suffering; their interventions save countless lives.

Focusing as they do on meeting critical needs, their frame for action is the near to immediate term.

In contrast, social entrepreneurs working on this issue aim at permanent change, seeking to put in place a new system that will secure communities' safe drinking water for the long-term.

For example, in 2003, Gary White developed WaterCredit, offering the poor a market-based alternative from the charity-driven water and sanitation solutions they were accustomed to.

Water.org's innovative approach was to make small loans available to households via microfinance institutions, empowering residents to take control of their water supply and vastly reducing the time required to fetch water from a local well. Now, $28 million in loans have now been made, with 840,000 people benefitting directly from WaterCredit.

Disruption of an existing status quo, replacing what exists with an entirely new system, demands scale. For business entrepreneurs, this translates to market dominance, with sufficient profits to fuel their ventures' growth through steadily expanding customer uptake. 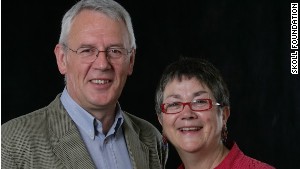 Andrea and Barry Coleman founded Riders for Health which seeks to ensure that health workers and health facilities have access to reliable vehicles to carry out their work effectively, so that communities across Africa receive regular, reliable health care.

Social entrepreneurs, too, must get to scale, but it's scale of impact they're after, with little to no chance of generating financial profit from the impoverished or marginalized populations they serve. And yet, they're every bit as driven as business entrepreneurs.

In other words, social entrepreneurs are defined not only by their determination to effect social change, but by the way they work: in common cause with those they serve and through high-leverage partnerships with enlightened governments and businesses. Their ultimate objective is social transformation, and their modus operandi is social as well.

The great social entrepreneur Muhammad Yunus didn't simply build an entirely new system of credit -- called microfinance, which provides financial services to those who haven't traditionally had access to banks -- to serve the poor; he structured Grameen Bank so that its poor borrowers were its owners, fully enfranchised in every dimension of the model.

Over more than two decades, social entrepreneurs Andrea and Barry Coleman have dedicated their lives to building a completely reliable, scalable healthcare delivery transportation system on the African continent. Operating nationally and regionally in seven African countries, Riders helps health care reach more than 12 million people. In Zimbabwe, malarial mortality rates in districts served by Riders' program dropped by more than 60%. In Gambia, its work has been the key to a comprehensive national health-care coverage.

Structured as a nonprofit social enterprise, Riders for Health secures its operating capital from African government ministries and from private philanthropy, with the latter source subsidizing the gap between what governments are able to pay and the system's costs.

Over the past several years, he's succeeded in bringing 10% of the world's fisheries into the organization's certification program, not simply by arguing the case for sustainability, but by creating demand. With mega-retailers like Walmart and consumer-facing brands like McDonald's committing to source 100% of their fish from MSC-certified suppliers, his organization has begun to tip the market for wild-caught fish.

Within every social entrepreneur is an unwavering belief that big, seemingly intractable problems offer unsurpassed opportunities for change.
Jeff Skoll and Sally Osberg

Howes understands what's on the line: millions of livelihoods that depend on sustainable fish stocks, food security for a world that looks to fish as its primary source of protein, and biodiversity for the planet's oceans. But to get from a reality presaged by the collapse of the cod fishing industry in the early 1990s to sustainable practice, he understood the need to engage everyone who was part of the system in its transformation: fishermen and consumers, fisheries and processors, suppliers and buyers.

Within every social entrepreneur is an unwavering belief that big, seemingly intractable problems offer unsurpassed opportunities for change. Instead of cursing the darkness, social entrepreneurs choose to ignite the flames of possibility and prove that even our toughest problems can be solved. The Skoll Foundation provides support for many of these change makers, and we're proud to count ourselves as their partners.

Their stories, their approaches and their results deserve to be better known so that business, government, and citizens the world over can join them in creating a future that works for everyone.