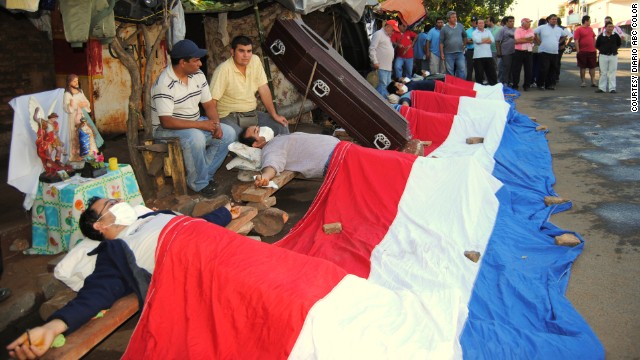 Eight bus drivers crucify themselves after getting fired in the city of Luque, Paraguay.
STORY HIGHLIGHTS

(CNN) -- They're lying on top of wooden crosses arranged flat on the ground.

Passers-by who approach them to get a closer look cringe when they see their hands. The protesters have driven nails into the flesh of their palms between their middle and index fingers, nails that then go straight into planks of wood.

The protesters are eight bus drivers who were fired from their jobs two months ago.

They protested in mid-July outside the offices of the Vanguardia bus company, their former employer. But after concluding they weren't getting anywhere by doing that, they "crucified" themselves more than two weeks ago across the street from Vanguardia's headquarters in the Paraguayan city of Luque, located 12 kilometers (about seven and a half miles) northeast of Asunción, the Paraguayan capital.

Damián Espinola, communications director with the Luque municipal government, has been part of a group of local authorities who have tried to mediate between the company and the crucified bus drivers.

"It's hard to believe, but it's true," Espinola said. "All eight bus drivers have been crucified for 17 days. They're also on hunger strike and some of them are in critical condition. They only drink water. They don't consume any solid food. Their hands are perforated."

Juan Villalba is one of the crucified bus drivers. Villalba is the secretary of the Paraguayan Federation of Transportation Workers. He told Paraguayan media that his group is willing to take the protest "to the very end," regardless of the consequences. His wife, María Concepción Candia, also nailed herself to a wooden cross Wednesday to show support.

But the company says it has done everything in its power to try to find a solution to the labor conflict. Aufredi Paredes, general manager of Vanguardia, told CNN that the company has even offered to rehire five of the bus drivers.

"We have done a little bit of everything to find a solution, including calling on the human rights commissions from the (Paraguayan) Senate and the Lower House. We have also met with the workers several times, but their leadership has been inflexible. We have followed labor regulations and will continue to abide by the law," Paredes said.

The protest by the eight is part of a larger labor action by some drivers for Vanguardia, a bus company with 150 employees that has been offering service in Luque and the capital for 45 years. There are currently a total of 50 bus drivers on strike, but the service has continued uninterrupted, Paredes said.

"The striking workers and some leftists who have gotten involved have attacked us and our vehicles, breaking windshields, tossing fireworks at us as well. We have also received death threats during meetings and afterward," Paredes said.

The workers have also caught the attention of national authorities. Cynthia González, vice minister of Labor and Social Security, visited them on August 23 in an effort to open a dialogue between the company and the bus drivers to find a solution.

"Both parties have to give up something in order to advance in the negotiations. In the meantime, we will continue to work by acting as mediators so that we can help the parties reach an agreement," González said. The workers went on strike July 23, according to the ministry.

There have been several meetings between representatives of the bus drivers, the company and mediators to no avail. Miguel Angel Gill, a councilman and medical doctor, is closely monitoring the health of the protesters. Every morning, local people gather around the crucified bus drivers to get an update on their condition.

A picture taken this week by Bernardo Agustti, a photographer for the Paraguayan daily Diario ABC Color, shows all the workers covered with a banner bearing the colors of the Paraguayan flag. All the workers are wearing medical masks. The crosses are lined up so that all of them face in the same direction.

In between two of them, lies a wooden coffin raised at a 45-degree angle; a coffin, they say, that will become their final resting place if the company doesn't meet their demands.