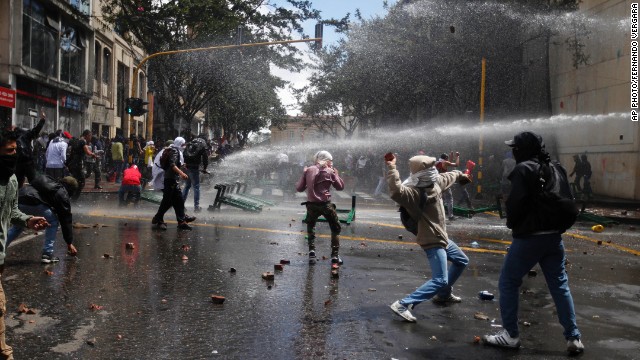 Speaking on Colombian national television, the president said he may also send troops to other locations around Colombia that have seen violent clashes between protesters and security forces.

CNN affiliate Caracol showed video of violent clashes between riot police and protesters in downtown Bogota, as well as images of other groups of protesters who blocked major highways connecting the Colombian capital with surrounding cities.

Vandals have smashed windows at foreign businesses, banks and fast-food restaurants. They also damaged billboards and security cameras at bus stations around the capital.

The protests have their roots in a strike that started on August 19. Farmers from around Colombia are demanding government support and credits, saying they can't compete against powerful agricultural businesses that benefit from free trade agreements.

Farmers who traveled to the capital to protest were joined by labor unions and student groups in marches and protests throughout Bogota.

Santos said those who staged acts of vandalism and attacked businesses are not legitimate farmers voicing their demands, but vandals taking advantage of the situation to loot and steal.

"Unfortunately, several of these protests were infiltrated and taken advantage of by vandals whose sole purpose is to create chaos and destruction and damage public and private property," Santos said. "There's no protest that merits the loss of human life, even if the demands being made are legitimate."

The Colombian president offered a reward equal to $2,600 for information that allows authorities to identify and capture those responsible for the acts of vandalism and attacks against security forces.

Ariel Avila, a Colombian political analyst, told CNN that guerrilla groups have tried to infiltrate the protests and have participated in acts of sabotage including burning buses and some other acts seen in recent days.

"But in general, this social movement has not been infiltrated," Avila said. "Here in the country's central region, in the provinces of Cundinamarca" -- which surrounds Bogota -- "and Boyaca, there has not been guerrilla activity in at least 15 years, so what the president said is not entirely accurate."

Avila, a former professor at the National University of Colombia and the current director of an organization that monitors armed conflicts in Colombia, said that the farmers strike is causing shortages of food products in the capitals of four provinces, including Bogota. Each city has more than 500,000 inhabitants.