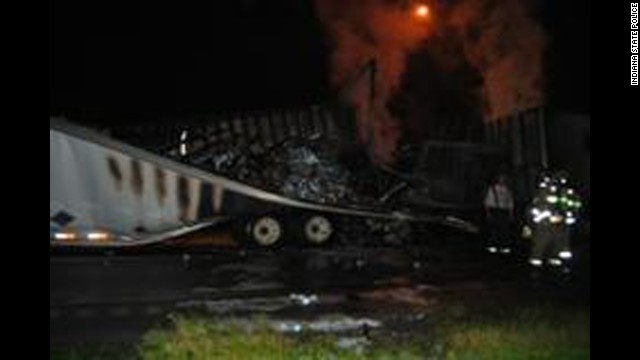 Seven people are dead, including four children, after a three-vehicle crash on Interstate 65 in Indiana.
STORY HIGHLIGHTS

(CNN) -- Seven relatives died when their SUV was crushed between two big rigs during a traffic backup in Indiana, leaving the vehicle in a burning, mangled heap.

Preliminary reports indicate the accident Thursday night occurred when the Jeep stopped behind a tractor-trailer near a work zone.

A tractor-trailer behind the Jeep failed to stop, rear-ending it and sending it plowing into the semi in front. The Jeep exploded into flames, which also spread to the two trucks.

After firefighters extinguished the flames, they found two bodies in the Jeep.

But the car was so severely burned and mangled, fire crews took it to the Keener Township Fire Department to remove the victims.

It took them hours to take it apart, and they then discovered five more bodies, authorities said.

"There were a total of three adults and four children found inside the vehicle," the Indiana State Police said in a statement.

CNN affiliate WLS said they were all family members, but did not specify how they are related to one another.

An investigation is under way, but alcohol and narcotics are not believed to be factors, authorities said.

One of the truck drivers was hospitalized while the other one was unhurt.