(CNN) -- The U.S. State Department and UK Foreign and Commonwealth Office have urged citizens to cancel travel plans to or within Egypt, amid ongoing protests and renewed violence in the country.

Demonstrators have clashed with police and rival demonstrators in Bani Suef, south of Cairo, Asuit and Alexandria following the first anniversary of President Mohamed Morsy's assumption of office.

Protesters to Egypt's Morsy: You have one day to step down

Protests have taken place in those cities as well as Cairo, Suez, Sharqia, El Monofia and Gharbiya, the state-run Ahram news agency said.

The demonstrations are "likely to continue in the near future," the U.S. travel warning said.

At least 16 people have been killed and 780 injured during clashes on Sunday and Monday, according to officials.

There have also been reports of numerous sexual assaults during the protests.

Protestors are demanding the resignation of President Mohamed Morsy from office. He came into power one year ago as the country's first democratically elected leader.

The United States has also evacuated various "non-emergency employees and family members" from the country. 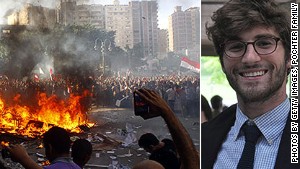 Andrew Pochter was killed while filming demonstrations in Alexandria.

Australia's Department of Foreign Affairs and Trade has urged a "high degree of caution in Egypt due to the risk of civil unrest and the threat of terrorist attack."

Similar warnings have followed from Canada. The Netherlands has been advising its citizens to "consider taking the initiative to leave the country" since February while other governments such as France, Germany and New Zealand continue to urge travelers to Egypt to avoid large crowds and maintain vigilance.

While the protests are directed at internal politics, foreigners have occasionally been caught up in the violence.

U.S. student killed in Egypt was enthralled with region

Another U.S. citizen was attacked with a knife outside the U.S. Embassy on May 9.

The World Economic Forum has declared Egypt one of the most dangerous places on earth after its recent troubles, riskier than countries such as Yemen and Pakistan.

Minute changes by Egypt's next leader may not be sufficient to bring genuine stability, writes H.A. Hellyer.
Can next leader transform economy?
updated 11:59 PM EDT, Thu May 22, 2014

Both presidential candidates have made lofty promises. But has either offered specifics on how the economy?
El-Sisi: Savior or traitor?
updated 4:06 AM EDT, Sun June 8, 2014

Hamdeen Sabahi is considered a heavy underdog in the race for Egypt's presidency, but he's sure he's going to win.
Mubarak, two sons sentenced
updated 6:08 PM EDT, Wed May 21, 2014

Instead of focusing on antiquities, Egypt's new "We miss you" video features dancers, malls and ritzy hotels.
What next for Muslim Brotherhood?
updated 11:14 AM EDT, Thu May 8, 2014

Can music heal the rift of revolution and conflict in Egypt? CNN's Reza Sayah meets the Egyptian band trying.
El-Sisi vows to finish off Brotherhood
updated 5:20 PM EDT, Tue May 6, 2014

Egypt's former military chief doesn't mince words when he describes what would happen if he wins the presidency.
Sexual harassment epidemic?
updated 5:37 AM EDT, Thu April 10, 2014

Are threats of sexual violence an everyday reality for women in Cairo?
Journalist 'will enjoy all his rights'
updated 12:41 PM EDT, Mon March 24, 2014

CNN's Sara Sidner talks about stepping in for Al Jazeera reporters since they have been barred from working in Egypt.
Arab Spring three years on
updated 7:34 AM EDT, Sat March 15, 2014

How are the Arab Spring nations faring? What successes can they boast and what challenges await?