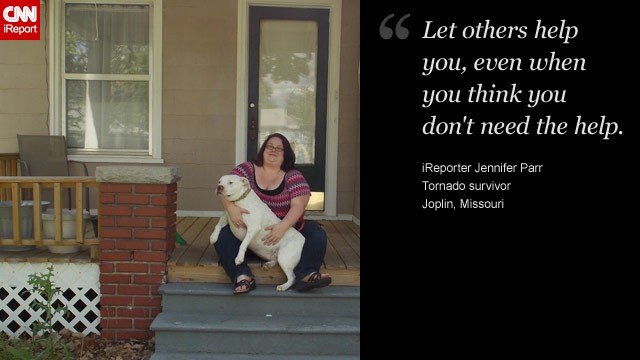 Jennifer Parr and her dog, Lulu, sit in front of their new home. Parr's house was a complete loss after the Joplin tornado.
STORY HIGHLIGHTS

(CNN) -- For most of us, it's hard to relate to the images of destruction we see on the television screen. It's nearly impossible to imaging losing it all.

But for the residents of Joplin, it's all too familiar.

Monday's massive EF5 tornado that tore through 17 miles of Moore, Oklahoma, brought back dark memories for those who survived the similarly powerful twister in Joplin almost two years earlier.

Seeing footage of Moore, Oklahoma, takes Jennifer Parr right back to May 22, 2011, the day an EF5 tornado ravaged Joplin and killed more than 150 people.

"I can still feel the shock, the awe, the sadness," she said. "I can still remember the smell too. It smelled like freshly cut wood."

CNN iReport followed up with Parr and other Joplin tornado survivors to find out how they moved on after the tragedy. They offered the following advice to the people of Moore:

'Let others help you'

Processing emotions has been difficult since Parr lost her entire home in the tornado. Two years later, the 32-year-old continues to work with a therapist.

Talking out her struggles has helped her "move forward and not stay stuck in the past," she said. "There are some days it is still hard to comprehend what I went through."

Shock and adrenaline carried her through the first days after the tornado. But after that, she said she didn't know what to do.

Parr empathizes with what the people of Moore are going through this week, remembering her own difficult experience. "Right now it feels impossible to start picking up the pieces, not knowing where to even start," she recalled.

Leaning on friends and family in the area helped as she started to piece her life back together. Her advice to Moore residents is simple: "Let others help you, even when you think you don't need the help."

'With patience we always get it right' 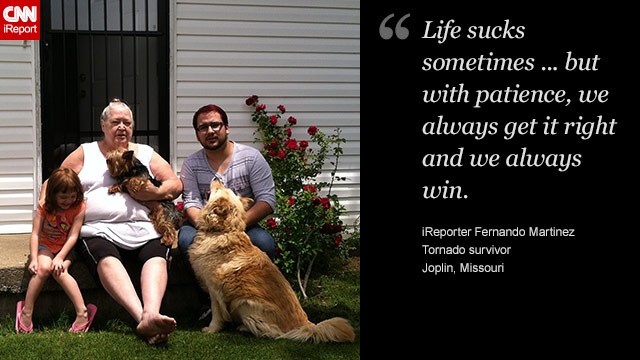 Fernando Martinez (right), his grandmother and niece sit in front of their home two years after the Joplin tornado.

Fernando Martinez hails from a Navy family and spent most of his life moving around. But when his grandparents retired, Joplin became home.

The day of the tornado, Martinez, his parents, grandparents and niece were all home together. Everyone survived, but the tornado tore their lives apart.

His mother was drained "emotionally" from the experience, so she and his father uprooted and moved to California. The rest of the family stayed in Joplin.

"I could never leave this town, and I have tried," said the 25-year-old. "I just keep coming back."

It was Martinez's close-knit family and his friends that helped him get through the months of wrangling with insurance companies and repairing the damage to the house.

"I think that when you experience something so traumatic and difficult to understand, you become stronger willed and it hardens your emotions a bit, making you a bit braver," he said.

Moving on though requires living on, Martinez said. "Life sucks sometimes, and we are sometimes given the worst hands when playing, but with patience, we always get it right and we always win." 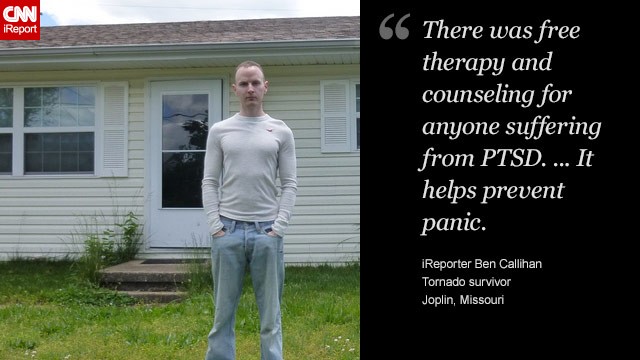 Ben Callihan stands in front of his Joplin home.

Ben Callihan may have returned to his day-to-day life quickly after repairing the $2,000 worth of damage to his Joplin home, but the storm affected him psychologically.

He and his roommate called their mothers as the twister barreled through their neighborhood. "The calls lost connection, and when the tornado was next to us it sounded like a clothes dryer, with footballs being kicked at my house every couple of seconds," he recalled.

These days, the 32-year-old lifelong Joplin resident is a lot more wary about inclement weather.

"Twice in the last month during tornado sirens I have sped to the temporary FEMA shelters in another town," he said, even though he knows that he should hunker down in the nearest available shelter, as FEMA recommends.

Callihan, who survived by hiding in his bathtub, has found it comforting to make his way to a shelter even when the weather is less dangerous than a tornado. "It helps prevent panic," he explained.

He encouraged tornado survivors to take advantage of free counseling and therapy that may be provided in Moore.

Part of complete coverage on
Oklahoma City Tornadoes
Moore, Oklahoma, a year after the tornado
updated 1:30 PM EDT, Tue May 20, 2014

Max Broderick remembers exactly what he did a year ago Tuesday.
Heartland devastated again: How to help
updated 9:58 AM EDT, Mon June 3, 2013

Heavy storms and tornadoes once again ripped through the Midwest. Already devastated areas of Oklahoma were hit again, and this time the damage spread to neighboring states. Here's how you can help.
Remembering the victims
updated 11:30 AM EDT, Thu May 30, 2013

Families share memories and snapshots of those we lost in the Oklahoma tornado devastation.
Breakdown of the storm fatalities
updated 1:11 PM EDT, Wed June 5, 2013

The Oklahoma medical examiner's office says 18 people in that state were killed in the storms. The office has released the names of 11.
Tornado chasers were researchers
updated 9:58 AM EDT, Tue June 4, 2013

They chased tornadoes not so much for the thrill, but in the hope that their research might help people avoid the fate to which they succumbed last week.
Storm chasing: Science, thrill-seeking or tourism?
updated 10:14 AM EDT, Tue June 4, 2013

A menacing tornado churned behind Mike Eilts as the storm chaser's truck sped away.
One block, two tornadoes: Life in the crosshairs
updated 6:26 AM EDT, Mon May 27, 2013

Why do people in Tornado Alley keep rebuilding and staying in place after storms rip through? People from Moore share their reasons why.
Photos: Deadly tornado hits Oklahoma
updated 5:07 PM EDT, Mon May 27, 2013

It's one of the most familiar pieces of advice from authorities to people in the path of a tornado: Get into your basement.
Storm-scattered mementos returning home
updated 7:55 AM EDT, Thu May 23, 2013

On Sunday, a mystery photograph fluttered from the sky and landed near Leslie Hagelberg's mailbox in West Tulsa, Oklahoma.
Photos: Above the disaster

Second-grade teacher Tammy Glasgow walks around what's left of Briarwood Elementary, struggling to pick out of its wreckage the things that once made a school.
Inside a tornado-ravaged school
updated 9:19 AM EDT, Wed May 22, 2013

It was the end of the school day. The kids at Plaza Towers Elementary School were stuffing their backpacks, looking forward to going home, playing with friends, eating snacks.
10 deadliest U.S. tornadoes
updated 11:31 AM EDT, Sun April 27, 2014

The "Tri-State Tornado" killed 695 people and injured 2,027, traveling more than 300 miles.
Map of the devastation

See the path of the tornado that ripped through Moore, Oklahoma.