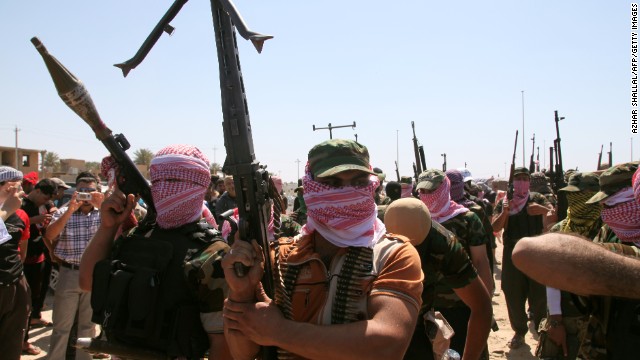 Iraqi anti-government gunmen from Sunni tribes in Anbar province march during a protest in Ramadi on April 26, 2013.
STORY HIGHLIGHTS

A curfew will be imposed in the province from 10 p.m. local time to 4 a.m., Iraqiya state TV reported.

Sheikh Ali Hatem al-Suleiman, emir of the Dulaim tribes, told CNN the security forces were seeking to arrest him when they carried out the raid on his farm near Ramadi.

Why are Iraq's Sunnis so upset?

Sectarian strife on rise in Iraq

He has been instrumental in setting up the so-called "Army of Pride and Dignity," an armed force formed by the tribes in Ramadi and elsewhere in Anbar province. Each tribe is responsible for its own men and their actions.

Speaking by phone from Ramadi, which lies about 100 kilometers (62 miles) west of Baghdad, al-Suleiman said that dozens of Iraqi soldiers had raided one of his farms early Thursday and detained three of his farmers.

Later, he said, dozens of Army of Pride and Dignity members tracked down the Iraqi army convoy that conducted the raid and clashed with it.

Al-Suleiman said that the tribal fighters had managed to free the three farmers.

"This is it; enough is enough. We will attack every Iraqi army checkpoint in Anbar if they don't withdraw from Anbar province immediately," he said.

"We will not accept any talks or negotiations with the government anymore."

Two other tribal leaders in Ramadi told CNN that Iraqi soldiers called the local police officers "traitors" because they were not cooperating with them.

Two police officers in Ramadi earlier said gunmen had clashed with Iraqi soldiers in eastern Ramadi on Thursday morning but could not give further details.

Al-Suleiman said the Army of Pride and Dignity is on full alert in Anbar province.

"We've been ready for a long time. We are certain that al-Maliki is a liar, the political process is just a game," al-Suleiman told CNN's Arwa Damon in an interview on May 5.

"Our weapons are everywhere, light, medium, and on up."

The tribes allied themselves with al Qaeda in Iraq and battled against U.S. forces for years before turning against the terrorist group in 2006.

But al-Suleiman said that al Qaeda militants will not be allowed to dominate again. "The tribes are not and will not again be a nurturing ground for terrorism," he said.

Tensions have grown in recent months between Iraq's Sunnis and Shiites, especially after an incident in Hawija, in Kirkuk province, last month where Iraqi security forces raided a site used by Sunni protesters to demonstrate against the Shiite-led government. At least 50 people were killed and more than 85 others injured in a clash between security forces and gunmen.

Sunnis, who comprise a minority of Iraqis, had clout during the Saddam Hussein era but have been politically marginalized since his overthrow. Shiites, who make up a majority of Iraqis, now dominate the government.

Since December, tens of thousands of demonstrators have taken to the streets of predominately Sunni provinces -- including Anbar, Nineveh, Salaheddin and Diyala -- demanding that the Shiite-led government stop what they call second-class treatment of Iraq's Sunni community.

CNN's Arwa Damon and Laura Smith-Spark contributed to this report.