Part of complete coverage from
Dean Obeidallah: Commentaries
SHARE THIS

Are you a bigot if you oppose same-sex marriage?

Protesters on both sides of the gay marriage issue gather on March 26.
STORY HIGHLIGHTS

Editor's note: Dean Obeidallah, a former attorney, is a political comedian and frequent commentator on various TV networks including CNN. He is the editor of the politics blog The Dean's Report and co-host of a new CNN podcast "The Big Three" that looks at the top 3 stories of the week. Follow him on Twitter @deanofcomedy.

(CNN) -- If someone today argued for laws to legally bar interracial marriage that person would universally be labeled a bigot.

But in 1967 when the U.S. Supreme Court in Loving v. Virginia struck down state laws prohibiting interracial marriage, 73% of Americans still supported them. Did that mean that more than 70% of Americans at that time were bigots? No. But there certainly came a time that you were one if you continued advocating for such discriminatory laws.

Are we at that point yet with gay marriage? Is it fair to label a person a bigot simply for arguing that marriage should only be between a man and a woman?

That's the first issue we discussed in Episode 2 of the new weekly CNN Radio podcast "The Big Three," co-hosted by CNN opinion contributors Margaret Hoover, John Avlon and myself. Each week we look at three big issues making news. (For those catching up, our first episode is here.)

To listen to this episode of "The Big Three," click on the Soundcloud audio player on this page. Or you can find us on iTunes.

In the new episode, here are the three topics we chose to discuss/fight/yell/joke about:

1. Are you a bigot if you oppose gay marriage? Margaret Hoover raised the issue of whether we throw the word "bigot" around too quickly. She also posed the thought-provoking question: Would we would have called President Obama a bigot a year ago before he embraced marriage equality? 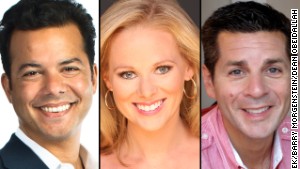 My response is "Yes" with an asterisk. The asterisk being that I won't yet call anyone who opposes marriage equality a bigot simply because they believe marriage should be between a man and woman. (If you demonize gays, than I will call you one now.) But in time, that label will be accurate for those who continue to advocate discrimination. John Avlon, being the centrist that he is, made a very fair point that this is a process and it will take time.

Become a fan of CNNOpinion
Stay up to date on the latest opinion, analysis and conversations through social media. Join us at Facebook/CNNOpinion and follow us @CNNOpinion on Twitter. We welcome your ideas and comments.

2. Representative Michele Bachmann being investigated by the Office of Congressional Ethics. Our own John Avlon broke this story in the Daily Beast on Monday. While I disagree with Bachmann on almost every issue, as a comedian I would hate to see her go. She is a less intellectual Sarah Palin, which equals comedy gold. But Margaret Hoover cites actual accomplishments by Bachmann in Congress as a member of the House Intelligence Committee. (I know, Bachmann serving on the Intelligence Committee is irony defined.) So will Bachmann be forced out of Congress, or will she remain in office much to the delight of a few people on the right -- and comedians everywhere?

3. Political Zombies. In the past, when politicians were caught in a scandal, they disappeared. But no longer. Today, our disgraced politicians are like "Jason" from the "Friday the 13th "movies. They just keep coming back. Former South Carolina Gov. Mark Sanford -- who had been caught sneaking away from his state to meet his mistress in South America -- is back and a favorite to win the Republican nomination for Congress in a special election next week. And last week it was disclosed that former Congressman Anthony Weiner -- of Twitter underwear photo fame -- spent more than $100,000 on polls to explore running for mayor of New York City. Are we such a forgiving people that they will succeed, as Margaret Hoover believes? Or is it all part of our reality show mentality that rewards fame, as John and I argued?

We hope you will check out this episode and let us know what you think.