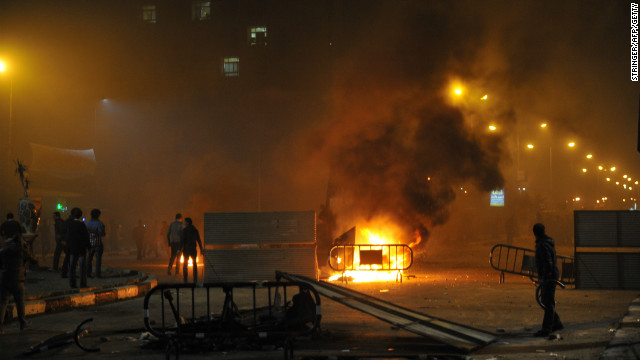 More than 150 of those hurt were still in the hospital as of noon local time, ministry spokesman Dr. Yehya Moussa said.

The violence snowballed throughout the weekend, as a March 9 verdict date neared for 52 defendants involved in a deadly riot at a soccer game in February 2012.

Fear and loathing in Egypt: The fallout from Port Said

Twenty-one defendants already have been sentenced to death for their alleged roles in the so-called "massacre at Port Said," when 74 people were killed and 1,000 injured after the Port Said-based al-Masry team defeated Cairo's al-Ahry 13 months ago.

Soccer fans in the restive Egyptian city also clashed with security forces and torched a police station Saturday, according to the interior ministry. The Green Ultras, fans of al-Masry, are often in the middle of political violence.

Egypt's football season opens -- with no fans in the stands

Reports surfaced that amid the weekend tumult, soldiers fought with police. And the state-run MENA news agency reported two of the those killed Monday were army conscripts. But a spokesman for Egypt's armed forces denied any conflict between the uniformed personnel.

"It is completely untrue that armed forces units in Port Said exchanged fire with police forces during the clashes," Col. Ahmed Ali posted on his Facebook page Sunday night.

Port Said, in northeastern Egypt, near the Sinai Peninsula, has had a tense relationship with Cairo dating back about 60 years.

Many residents of Port Said felt Egyptian security forces didn't adequately defend the city during the series of wars with Israel that began with the Jewish state's creation in 1948 and ended after the 1973 Arab-Israeli War.

In addition, some Port Said residents say the central government doesn't invest enough of the tax dollars it reaps from international ships traveling through the Suez Canal back into in Port Said.