Chavez announces his return to Venezuela; cancer treatment to continue 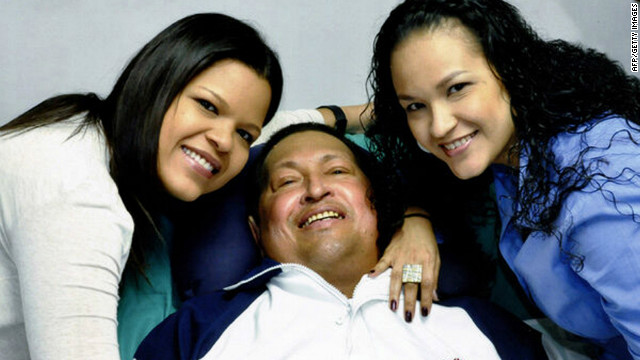 (CNN) -- In a posting on the Venezuelan president's official Twitter account, Hugo Chavez said Monday that he had returned to Venezuela from Cuba, where was treated for cancer.

"We have arrived again in the Venezuelan homeland," it read. "Thank God! Thank you dear people! Here we will continue the treatment."

It added: "Thanks to Fidel, to Raul, to all of Cuba!! Thanks to Venezuela for so much love!!!"

Venezuelans have seen and heard little of their leader in recent months. Monday's Twitter posts were the first since November 1.

The announcement was preceded by a glimpse of the ailing president on Friday, when the government released a series of photographs that showed a smiling Chavez -- his face bloated -- lying on a blue pillow, flanked by his two daughters.

Since Chavez underwent cancer surgery on December 11, government accounts about his health have been vague.

After previous procedures, Chavez called state television to offer upbeat, if vague, reports on his condition. There have been no such calls in recent weeks.

Venezuelan Information Minister Ernesto Villegas said doctors had inserted a tracheal tube, which had temporarily made it difficult for the president to speak.

"Two months after a complicated post-surgery period, the patient remains conscious, fully intellectually aware, in thorough communication with his governing team and on top of the fundamental duties of his post," Villegas said.

A respiratory infection has been controlled, but the president still has some "insufficiency" in his breathing, Villegas said.

The photos were taken Thursday evening at the Cuban hospital where Chavez was treated, the minister said.

In Cuba, Chavez has found a medical system that has greatly benefited from the Castro brothers' focus on health care since the 1959 revolution.

He has also found support from Raul and Fidel Castro, the current and former president respectively, who share Chavez's Socialist views and are indebted to the Venezuelan leader for oil subsidies that have proved crucial to the island's economy.

Finally, the Venezuelan leader has found a government-controlled news media that has revealed few details about his health. For example, authorities have not revealed what kind of cancer Chavez has.

Before Chavez returned, his critics accused him of having left the country without a leader, while his supporters said that he was running the country from Havana.

This week, in a decision officials said was made by Chavez from Havana, the country devalued its currency, stirring concern among some Venezuelans that the move could portend a spike in the cost of imported goods.

Speaking to the Telesur network, Venezuela's minister of science, technology and innovation, Jorge Arreaza, said Chavez was able to communicate even if he has difficulty speaking.

"He writes, he can be understood," Arreaza said. "It's not the voice he is known for, but he can communicate."

His precarious health prevented Chavez from returning to Caracas for his inauguration on January 10.

While political opponents said that postponing the inauguration was unconstitutional, Venezuela's Supreme Court sided with Chavez's party, which argued that he did not need to be present at the swearing-in for his next term to begin.

Instead of holding a traditional inauguration ceremony, throngs of supporters in Caracas swore an oath of loyalty in Chavez's absence. Many waved flags and carried photos of the president.

The plan to embalm the body of Venezuelan President Hugo Chavez may have hit a snag.
Why display embalmed world leaders?
updated 10:31 PM EST, Fri March 8, 2013

The body of Venezuelan President Hugo Chavez is the latest in a long line of world leaders whose remains have been embalmed and displayed.
Venezuelan leader Hugo Chavez dies
updated 5:38 AM EST, Wed March 6, 2013

Hugo Chavez, the polarizing president of Venezuela who cast himself as a "21st century socialist" and foe of the United States, died Tuesday.
Share your thoughts on Chavez

What is your reaction to President Chavez's death? How do you think it will affect Venezuela's politics? How does is affect your country?
Watch: A look at the life of Hugo Chavez
updated 6:07 PM EST, Tue March 5, 2013

Venezuela has been transformed while Chavez was in office. Browse through the picture to explore his legacy.
Watch: Hugo Chavez's legacy
updated 4:56 PM EST, Tue March 5, 2013

Hugo Chavez played key role in focusing attention on the poor. But Frida Ghitis says in the process of helping the poor, he undermined the democracy.
Right time to forge ties with Venezuela
updated 8:38 AM EST, Fri March 8, 2013

Jesse Jackson: Chavez's death an opportunity for U.S. and Venezuela to heal relations.
What's next for Venezuela?
updated 10:39 AM EST, Wed March 6, 2013

The death of the charismatic but controversial leader leaves many unanswered questions that Venezuela and the world must now grapple with.
Chavez sings a tune with Larry King
updated 8:35 PM EST, Tue March 5, 2013

News of Chavez's death drew impassioned reactions from around the world, as leaders and other public figures weighed in on his legacy.
Memorable quotes from Hugo Chavez
updated 2:24 AM EST, Wed March 6, 2013

CNN looks back at some of the more memorable things President Hugo Chavez said during his life -- like calling George Bush the devil.
Interim leader thrust into spotlight
updated 5:34 AM EST, Wed March 6, 2013

He began his career as a bus driver, then rose through the ranks to become a member of Venezuelan President Hugo Chavez's inner circle.
Economy more equal, less stable
updated 2:53 AM EST, Wed March 6, 2013

Chavez will be remembered for improving the wealth and political participation of the poor. But his death leaves an economy in tatters, some say.
Photos: Celebrities and Hugo Chavez
updated 10:33 PM EST, Tue March 5, 2013

Chavez cultivated a larger-than-life appearance. But even after years in office, his legacy may be more fleeting than his outsize personality suggested.
Chavez's final interview with CNN
updated 5:40 PM EST, Tue March 5, 2013

Get the latest news, analysis, commentaries and videos from Venezuela in Spanish language on CNN Español.