The pope's 5 most popular tweets 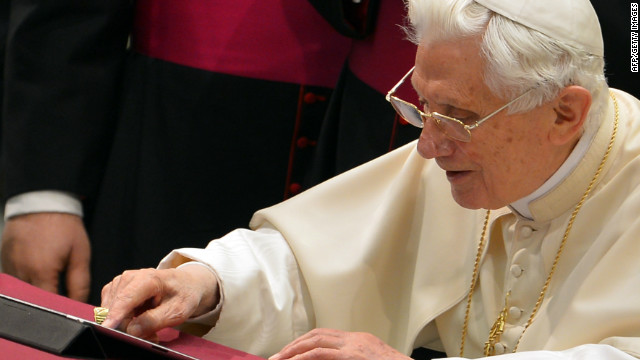 Pope Benedict XVI has been active on Twitter for about two months. He recently announced that he will resign as pope.
STORY HIGHLIGHTS

(CNN) -- Assuming Pope Benedict XVI steps down as planned at the end of February, his tenure on Twitter will have been fleeting.

The pope has been active on the social-media platform for only two months. During that time he has sent just 34 tweets -- 33 if you don't count one that corrected a typo in a previous message.

The spiritual leader of 1.2 billion Catholics stunned the world Monday with the news that he will resign February 28 "because of advanced age."

Most of the pope's messages to his 1.5 million followers have promoted Catholic doctrine and teachings, although he has also occasionally commented on current events, condemning violence in Nigeria and Syria. One tweet asked followers for suggestions on how to be more prayerful when "we are so busy with the demands of work, families and the world?"

The first Catholic pope to use Twitter, he tweets under the handle @Pontifex -- meaning "bridge builder" in Latin.

All his messages have been retweeted by thousands of followers, although others have used Twitter to criticize the Catholic Church over sexual abuse by priests, its stance on gay marriage and other issues.

Here are Pope Benedict XVI's five most popular Twitter messages, as ranked by the number of retweets:

Dear friends, I am pleased to get in touch with you through Twitter. Thank you for your generous response. I bless all of you from my heart.

Offer everything you do to the Lord, ask his help in all the circumstances of daily life and remember that he is always beside you

We can be certain that a believer is never alone. God is the solid rock upon which we build our lives and his love is always faithful

May Our Lord bless you and watch over you in the new year.

Everyone's life of faith has times of light, but also times of darkness. If you want to walk in the light, let the word of God be your guide