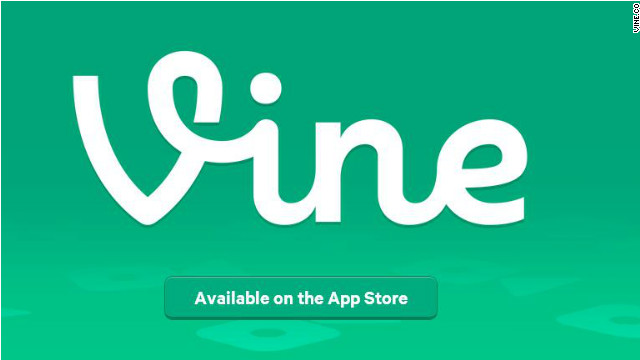 Twitter's introduction of short video clips promises changes on the site, some better than others.
STORY HIGHLIGHTS

(CNN) -- Call it the Twitterfication of social sharing.

As if it wasn't enough for Twitter to limit our bursts of inspiration to 140 written characters, it has now rolled out Vine, a video-sharing app that limits your videos to just six seconds.

What can you do with six seconds of smartphone video (which, for now, is available only on iPhones, causing an aggravated Android Nation to again wail and wait)?

Not re-enact "Lawrence of Arabia" using action figures. That would take 2,270 Vine posts, give or take. Nor can you document a successful rodeo bull ride; those require at least eight seconds.

As the tech press largely fawns over the new tool's potential, we're taking a look at some of the ways the tool might affect your Twitter feed and the Web as a whole.

And it seems only appropriate that we analyze Vine's six-second bursts in six points. Here's what Vine could do:

If, as the Bard wrote, brevity is the soul of wit, the six-second time limit could in fact inspire creativity. That's the logic behind Twitter itself, really.

Once derided by critics as an example of society's increasingly gnat-like attention span, the site's 140-character limit has in many cases inspired users to be as witty, insightful or informative as they can be in as few words as possible.

Twitter is sometimes called a "microblogging" site. Considering some of the long and winding blog posts we've read over the years, there's some value in spurring users to make their point quickly. Maybe Vine will do the same for Web video.

"My guess, given the enthusiasm for Twitter so far, is that people are going to do really cool things," Scott Klemmer, co-director of the Human-Computer Interaction Group at Stanford University, told Wired, a CNN content partner.

"One of the things we know about creativity is that constraints are essential for getting people to do creative stuff. If you come up with the right constraints, that's a benefit, not a drawback."

And here's an example:

(Of course, if you desperately need a 10-minute loop of sniveling King Joffrey from "Game of Thrones" getting slapped to a Led Zeppelin soundtrack, we've still got YouTube.)

2. Spam up your feed

A vine can be a lovely thing. Think Wrigley Field or the Ivy League. But it can also be a noxious weed.

In the first 24 hours, the primary theme of most of the Vine videos we've seen has been "Hey, I'm making a Vine video!" We're not immune from this ourselves.

That will probably change, in many cases, as creative folks fine-tune their craft. But let's be honest: Among Twitter's millions of users are a lot of people who will probably be sharing the banal and the stupid. And, if Web history holds true, clips of themselves naked.

Hopefully, you've crafted your "follow" list to keep most of these people off your screen. Otherwise, you could find yourself clicking on a lot of videos of people's food.

Which, as we all know, is what Instagram is for.

It surprisingly took a few months after Facebook bought the aforementioned Instagram, an app that lets users slap groovy-looking filters onto their photos, for it to cause a falling-out with Twitter.

Fair enough, we suppose. Why let a competitor reap the benefits of an app you just shelled out a reported $1 billion to buy?

So, if that makes Facebook the go-to platform for social photos, maybe Vine makes Twitter the default place for fun mini-videos. As the platform strives to turn a profit, the Vine clips may give users a new reason to linger.

Delete all you want. Once you tweet something, it's out there forever. Ask Chris Brown. Or Gilbert Gottfried. Or Anthony Weiner.

Put videocameras in the hands of millions, give them a platform to share the results with the rest of those millions, and bad decisions are sure to ensue. Often after a few cocktails, or if you're a celebrity.

Given a new tool with which to share, or overshare, we all can expect more Twitter missteps. Many of us can't wait.

5. Continue the rebirth of "GIFs"

OK, this one is already under way. Years after the Web gave us Peanut Butter Jelly Time, folks have rediscovered the joy of watching something quick and silly happen over and over again.

Vine builds on this idea. Your six seconds (or fewer) of video loops for as long as the viewer lets it run. This can be disconcerting and annoying. But as folks get creative, it could also be clever. The first person to re-enact "Dramatic Chipmunk" has our undying devotion. (Fun discovery: That YouTube classic is exactly six seconds long).

A Vine isn't actually a GIF (Graphic Interchange Format is the full name). But it can take advantage of the same instincts that have made GIFs an enduring Web feature.

Vine isn't the only mobile app jockeying to be the "Instagram of Video."

Viddy, Tout, SocialCam and even the ill-fated Color all wanted to become the front-runner in this emerging social field. Twitter may have shut down that argument when it acquired Vine for an undisclosed amount.

Sure, the mobile space has its share of stories in which the bantamweight manages to dance around a heavy hitter. Remember when Facebook Places was supposed to crush Foursquare?

But Vine will be sitting right there in front of Twitter's more than 140 million users. The others will need to innovate or die.

Have you seen any Vine videos you really liked, or made some of your own? Let us know in the comments.