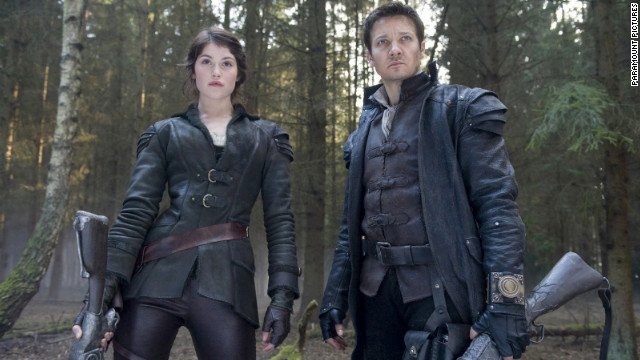 (CNN) -- If this long-delayed and blatantly pandering CGI malarkey is anything to go by, Hollywood's current craze for fairy tales isn't going to have a happy ending.

Originally slated for release last spring, "Hansel and Gretel: Witch Hunters" was ostensibly pushed back to take advantage of Jeremy Renner's rising star (he had "The Bourne Legacy" and "Avengers" coming out in the summer).

Renner is entitled to cash in on his "Hurt Locker" acclaim and make a living like anybody else, but I'll bet he was more animated cashing his check than he is as a gun-toting medieval witch slayer, the little boy from Grimm's fairytale grown up with a chip on his shoulder and an inexplicable American accent (which is shared by his "sis," Gemma Arterton's leather-clad Gretel, but no one else in this neck of the woods).

Hansel is also inflicted with diabetes -- "sugar sickness" -- and periodically slumps into a coma until he self-administers an injection through his britches. You'll know how he feels. The idea may be kind of cute -- remember Hansel was force-fed candy as a kid -- but typically half-baked in a flick that throws anachronisms around like they're going out of style.

Writer-director Tommy Wirkola, whose first film was the cult Nazi zombie pic "Dead Snow," hasn't concocted more than a slender thread of a narrative. A witch is snatching so many children that the town mayor brings in the sibling celebrity bounty hunters (wait a minute, didn't Terry Gilliam all ready make this movie as "The Brothers Grimm"?). Rather than construct any scares, suspense or surprise, the movie attempts to stave off boredom with a dose of kung fu fighting every five minutes.

The movie hits its nadir early, when Thomas Mann's teenage fanboy, Ben, shows up in a tavern bearing press clippings of the dynamic duo's exploits and asks for their autographs -- slipping in some bonehead exposition for good measure: "So how do you kill witches?"

It never really improves much either -- except maybe in the gratuitous semi-nudity when a mildly wounded Hansel is coaxed into skinny dipping in "healing waters" by a comely maiden who leads by example.

Playing the wickedest witch ("Muriel"), whose true features resemble the Bonneville Salt Flats, Famke Janssen signals her wickedness by. Talking. Like. This. Very. Slowly. Which has the unfortunate consequence of underlining the clichéd nature of lines like "I'm not. Going to. Kill you. Yet. That. Would. Be. Too. Ea. Sy!"

It's a tossup what's most depressing, the abject storytelling (and when you find yourself yearning for the storytelling skills of Terry Gilliam, that's not a good sign) or the reprehensible, lazy thinking that equates evil with physical deformity. Look how we're invited to enjoy the slaughter of witches -- including conjoined twins and a "half lady" -- and how Wirkola insidiously mixes sideshow freaks with the reactionary connotation of the word: The witches are made up to resemble Goths and punks, outsiders who deserve nothing better than the gory reckoning he contrives for them.

As for shooting the thing in 3-D, the movie has some eye-catching effects. It's just a pity Wirkola and company never see the wood for the trees.