(CNN) -- Former Rep. Gabrielle Giffords and her husband Mark Kelly have launched what they hope will mark a new era in the battle over gun rights in America.

On the second anniversary of a mass shooting in Arizona that wounded Giffords and killed six others, the couple launched a political action committee, Americans for Responsible Solutions, along with a website calling for contributions to help "encourage elected officials to stand up for solutions to prevent gun violence and protect responsible gun ownership."

In an op-ed in USA Today, the two make their goal clear: to counter the influence of the gun lobby.

"Special interests purporting to represent gun owners but really advancing the interests of an ideological fringe have used big money and influence to cow Congress into submission," they write.

"Rather than working to find the balance between our rights and the regulation of a dangerous product, these groups have cast simple protections for our communities as existential threats to individual liberties. Rather than conducting a dialogue, they threaten those who divert from their orthodoxy with political extinction."

Emphasizing that they support the Second Amendment and own two guns themselves, Giffords and Kelly call for "laws to require responsible gun ownership and reduce gun violence."

"Until now, the gun lobby's political contributions, advertising and lobbying have dwarfed spending from anti-gun violence groups. No longer. With Americans for Responsible Solutions engaging millions of people about ways to reduce gun violence and funding political activity nationwide, legislators will no longer have reason to fear the gun lobby."

Legislators will no longer have reason to fear the gun lobby.
Gabby Giffords and Mark Kelly

"America has seen an astounding 11 mass shootings since a madman used a semiautomatic pistol with an extended ammunition clip to shoot me and kill six others," Giffords writes.

"This country is known for using its determination and ingenuity to solve problems, big and small ... But when it comes to protecting our communities from gun violence, we're not even trying -- and for the worst of reasons."

Giffords and Kelly have spoken out in the wake of last month's slaughter in Newtown, Connecticut, that left 27 people murdered, 26 of them at Sandy Hook Elementary School -- including 20 children.

Giffords wrote on Facebook at the time, "As we mourn, we must sound a call for our leaders to stand up and do what is right. This time our response must consist of more than regret, sorrow, and condolence. The children of Sandy Hook Elementary School and all victims of gun violence deserve leaders who have the courage to participate in a meaningful discussion about our gun laws -- and how they can be reformed and better enforced to prevent gun violence and death in America. This can no longer wait."

Giffords and Kelly visited Newtown last week. They met with local and state leaders to discuss gun control legislation, mental health identification and treatment, and "concerns for the erosion of our societal values such that we are increasingly desensitized to violence," according to Newtown First Selectman Pat Llodra.

Giffords told to 'stay out' 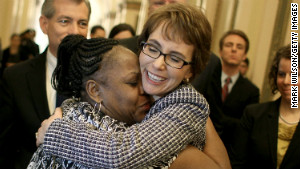 Hovey later issued a statement apologizing, saying, "Our community has struggled greatly through this tragedy, and we are all very sensitive to the potential for this event to be exploited for political purposes. This is what I wish to avoid." The statement added that Hovey has advocated for a dialogue on mental health issues, school safety and gun control.

Kelly, a former captain in the U.S. Navy and NASA astronaut, also responded publicly in the wake of the Newtown shootings.

On his Facebook page, he took on the National Rifle Association -- the central pro-gun rights lobby -- after a news conference by a top NRA official about the Newtown tragedy triggered widespread anger.

Kelly wrote that the NRA's response was "defiant and delayed," and that the organization "chose narrow partisan concerns over the safety of our families and communities."

The NRA has argued that it is committed to keeping people protected, and that a focus on stricter gun control is misguided.

"If it's crazy to call for putting police and armed security in our schools to protect our children, then call me crazy," NRA CEO Wayne LaPierre said of the anger following his initial news conference.

LaPierre made clear his group believes that more guns, not fewer, are necessary for security. 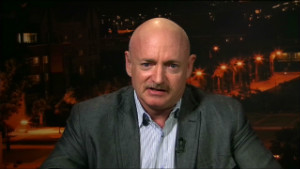 Mark Kelly and his wife Gabrielle Giffords are launching a PAC to battle gun lobby.

Kelly said he knows from personal experience that that's not the case.

The day Jared Loughner shot Giffords and 18 other people at a public event in Tucson, there was such a "good guy," Kelly argued in an interview with ABC.

A man came out "of the store next door and nearly shot the man who took down Jared Loughner," Kelly said. "The one who eventually wrestled (Loughner) to the ground was almost killed himself by a good guy with a gun, so I don't really buy that argument."

Giffords and Kelly want to require comprehensive background checks for private sales of firearms, ABC reported. And Kelly said he does not believe an extended magazine is needed for those who have guns for sport.

Gunmen have used high-capacity weapons in numerous shootings, including one at a movie theater in Aurora, Colorado, and Newtown, where gunman Adam Lanza had four weapons.

There just may be a time when I need to do the unthinkable.
Joshua Boston, former Marine

"I own the guns I own because I acknowledge mankind's shortcomings instead of pretending like they don't exist," Joshua Boston wrote in a CNN iReport. "There are evil men in this world and there just may be a time when I need to do the unthinkable to protect me or my family."

Facebook user Ellen Schmuker wrote in a CNN discussion that Giffords and Kelly's plan is "foolish" because "all gun bans are going to do is punish law abiding citizens for the actions of lunatics."

But HoaiPhuong Nguyen took the opposite stance. "No one is more qualified to head this effort, go Gabby and Mark," she wrote.

What do you think of Gabby Giffords & Mark Kelly's new efforts to counter the gun lobby? Weigh in for a story. ow.ly/gD5M7

CNN.com users weighed in on Twitter as well, with Susan Blumberg-Kason saying she considers the idea "crucial."

In their column Tuesday, Giffords and Kelly note that that gun violence "kills more than 30,000 Americans annually."

According to the Centers for Disease Control and Prevention, in 2009, 31,347 people died from firearm injuries. Nearly 60% were a result of suicide. Homicide comprised 37% of those deaths. Overall firearm injuries were down 2% from the year before.

Giffords' remarkable recovery after being shot in the head has inspired many across the political spectrum. She told ABC she's doing physical therapy, yoga, and speech therapy, and working with a service dog. She has also been able to begin some outdoor activities.

The tragedy two years ago thrust her and her husband into a new kind of spotlight. Tuesday marks a moment in which they are turning all that focus and attention -- as well as their passionate calls for stricter gun control -- into a political movement.

"We can't be naive about what it will take to achieve the most common-sense solutions," they wrote in their op-ed. "We can't just hope that the last shooting tragedy will prevent the next. Achieving reforms to reduce gun violence and prevent mass shootings will mean matching gun lobbyists in their reach and resources."

"We have experienced too much death and hurt to remain idle. Our response to the Newtown massacre must consist of more than regret, sorrow and condolence. The children of Sandy Hook Elementary School and all victims of gun violence deserve fellow citizens and leaders who have the will to prevent gun violence in the future."

What do you think? Post comments, or send an iReport.