Read a version of this story in Arabic.

First, a YouTube video of an eagle snatching up a toddler captivated millions of viewers, some of whom may not have immediately realized it was fake.

Uploaded on Tuesday, the clip shows a golden eagle swooping out of the sky to grab an infant in its talons, then dropping the child seconds later. Despite broad and immediate skepticism of its authenticity, it had more than 5 million views by Wednesday evening.

The Canadian digital-media school where the video was created issued a statement Wednesday afternoon clarifying the clip as a hoax and naming the students involved. However the school, Centre NAD, was unapologetic about its prank, even pointing viewers to another hoax video, created by students, of an unlikely penguin escape. (The penguin video had a paltry 37,000 views.)

Sandra Bauer wrote, "... it would be a good idea to post some links to raptor rescue centres. This video will undoubtedly spawn irrational fear of eagles and others."

Considering that the bald eagle is a national symbol of U.S., maybe it's fitting that the day's other viral imagery involved President Barack Obama.

Time's website published a behind-the-scenes gallery of photos of Obama, snapped by White House photographer Pete Souza, to accompany the magazine naming Obama its Person of the Year.

One of them showed Obama at the White House, pretending to be caught in a pint-sized Spider-Man's web. 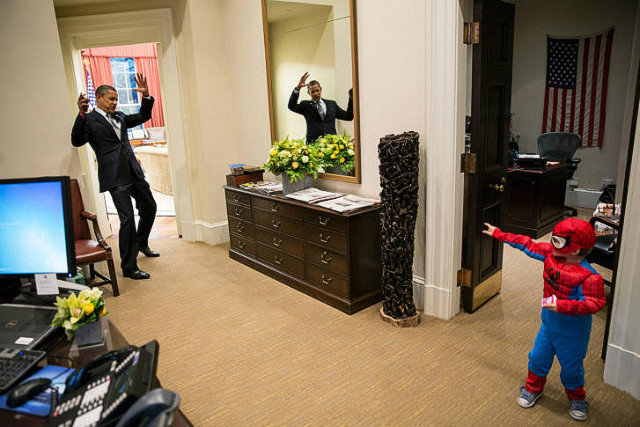 Although Time's choice of Obama over Pakistani schoolgirl activist Malala Yousafzai was controversial to some, Twitter was immediately captivated by the Spider-Man image. Obama posted the photo Wednesday morning on his Twitter account, and by the evening it had been retweeted more than 9,200 times.

@michael_lobster tweeted, "I really hope that this is the plot of the new Spider-Man movie."

"Am I the only one who is skeptical of all these cute kid picture situations the President seems to find himself in? Authentic or staged?" wrote Sunny Blankinship.

"I don't know about politics, but I can tell you one thing," wrote Kaldrenon on the social platform Reddit. "I want to be the kind of father Obama is, and treat all kids this well."

"The photo," wrote Gawker, "does a better job of cementing the correctness of Time's selection than any 10,000-word profile can."