Election Day should be a federal holiday 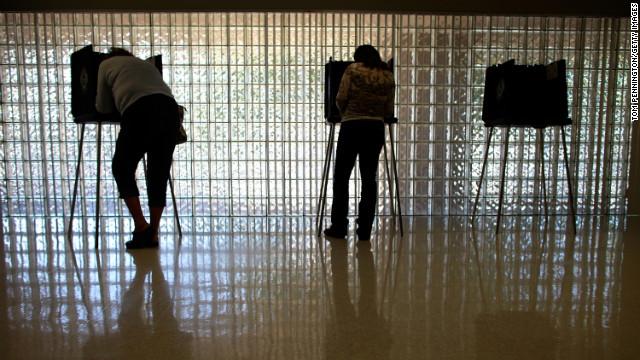 A federal holiday for Election Day could create a more festive atmosphere -- and more time to vote.

(CNN) -- I know some 800,000 people retweeted that "four more years" image of Barack and Michelle Obama. But a different and much-less-discussed tweet caught my eye on Election Day:

Election Day should totally be a federal holiday right? Like, let's trade in Columbus Day. Big festive Election Day BBQs should be a thing.

Explain to me how that's not a genius idea?

Of course, it's not an entirely original one. The actor who plays Dwight Schrute on "The Office" made a video about the subject earlier this year. But the best argument I found in favor of an Election Day holiday was in the pages of The Atlantic in 1998. Way back in those Backstreet Boy times, Martin Wattenberg wrote that Election Day should be combined with Veterans' Day to create Veterans' Democracy Day.

"This would send a strong signal about the importance our country attaches to voting," he wrote. "And what better way could there be to honor those who fought for democratic rights than for Americans to vote on what could become known as Veterans' Democracy Day?"

Veterans' Day is celebrated on November 11, which is Sunday this year. (Federal employees have Monday, November 12 off work). The holidays could be combined, Wattenberg says, on the second Tuesday in November.

I love Wattenberg's idea about Veterans' Day because of the message it sends to voters.

For the past month or so, I've been writing about Hawaii's distinction as the state with the lowest voter turnout rate in the 2008 election (and possibly in 2012, but the numbers are still coming in). For one piece of the project, I asked the People of the Internet to send messages to six nonvoters in the Aloha State, trying to convince them to vote. Three of the six caved to the social media pressure, and one, Michael Remen, told me he voted simply because of one of the messages he received. It came from a commenter on CNN iReport's Facebook page:

"Send him a free ticket to Arlington Cemetery and (show) him how many reasons there are to vote, since all those there died for that right, here and abroad."

"I thought that was a really powerful statement," Remen said, "and it made really good sense."

Aligning Voting Day with Veterans' Day not only makes logistical sense -- lines might be shorter if not everyone ran to the polls at the start and finish of the work day -- but also symbolic sense.

It might serve as a reminder to people like Remen that veterans have given their lives to protect the right to vote in the United States. The least we can do in return is honor their sacrifice by casting a ballot. And, as that tweet suggested, an Election Day barbecue wouldn't be so bad, either.

The opinions expressed in this commentary are solely those of John D. Sutter.

The goal of this news experiment is to use the power of the Internet -- with your help -- to push for change in places that need it most.
Hawaii: The state that doesn't vote

Elle Cochran grew up far too enchanted by Maui's rocky coastline and beach-bum lifestyle to care a thing about politics and voting.
Video: Voting in the Aloha State
updated 7:20 PM EDT, Wed October 24, 2012

There are many ways to encourage someone to vote -- from shaming to calling on the power of history. Here are some arguments you submitted.
Where does your state rank?

Hawaii has the lowest voter turnout rate in the nation. Who has the highest? Check this list to see -- and find how your state ranks.
The homeless candidate for Congress
updated 2:27 PM EDT, Mon October 29, 2012

Kawika Crowley lives, works and runs his U.S. congressional campaign out of a beat-up white minivan.
Yo Internet, convince me to vote!!!

These six Hawaii residents don't plan to vote in November. Use social media to help us convince them to make their voices heard.
#CTL1: Convince Paul to vote
updated 9:52 AM EDT, Tue October 23, 2012

Help us convince Paul to vote for the first time. Post messages or videos and tweet the link with the hashtag #CTL1. Here are the best so far.
#CTL2: Convince Michael to vote
updated 9:57 AM EDT, Tue October 23, 2012

Michael Remen doesn't plan to vote because of polling place issues on his island. Tell him why his vote matters Tag the message #CTL2.
#CTL3: Convince Nani to vote
updated 10:00 AM EDT, Tue October 23, 2012

Nani Teruya considers the U.S. government to be illegitimate in Hawaii. Send her a message and tag it #CTL3.
#CTL4: Convince Skyler to vote
updated 11:50 AM EDT, Wed October 24, 2012

Soon to be 18, Skyler Gayhart said he feels to young to be able to cast a ballot. Take a look at the meesages readers have sent him. And send your own.
#CTL5: Convince Nanci to vote
updated 11:53 AM EDT, Wed October 24, 2012

One year, Nanci Munroe found out the new president while she was driving to her polling place. Tell her that her vote still matters.
#CTL6: Convince Tyler to vote
updated 11:54 AM EDT, Wed October 24, 2012

Tell his University of Hawaii student why it's important for young people to participate in our democracy. Tag messages #CTL6.
8 reasons Hawaii doesn't vote

From surfer apathy to an ugly history, a bite-sized look at the problem.
On who votes and who doesn't ...

Some groups -- the educated and the rich, for example -- vote at much higher rates than the rest. Here's a look at the data.
From non-voter to political candidate

Joe Heaukulani. 36, has a remarkable story of transformation. He didn't vote at all until 2010 -- and now he's inspiring others to care.
Mahalo for voting, Hawaii!

Share this image on Tumblr to thank people in Hawaii for voting this November.
Searching for the 'Kings' of West Maui

It's public record whether you voted or not. So with records in hand, we searched out some non-voters. Not to shame -- but to encourage.
Hawaii's first-time voters

These people who pledged to vote for the first time are the ones who can bump Hawaii off the bottom of the list. Make your pledge here.
Where 'Republican' is a dirty word

Sam Slom is the only Republican state senator in Hawaii. "I go to work everyday," he says, "and I'm outnumbered 24 to one."
Hawaii's history of civic engagement

Around statehood, in 1959, more than 90% of registered voters in Hawaii went to the polls. So what happened?
Education and the end of voter apathy

Social studies teacher Jason Duncan is trying to do his part to kill voter apathy. "One of my responsibilities is to create an informed citizenry."
Gallery: Voting in paradise

A look at voters and non-voters in the Aloha State.
Polling places turned voters away

Officials on the Big Island of Hawaii are working to make sure the November election goes smoothly after problems plagued the primary.
CNN's 'I'm voting' app on Facebook

Let your friends know you will vote on November 6. It will encourage them to do the same.
Hawaii's most eccentric candidate

U.S. House candidate Kawika Crowley says he lives out of this van, which also serves as his campaign headquarters.
How to make voting contagious

Nick Fancher, 18, attends the school Obama did. He's not sure who will get his vote, but he has ideas about getting others to turn out.
A message from Maui's mayor

Maui's mayor wants everyone on the island to participate in elections. A district in West Maui has the lowest turnout rate.
Why Hawaii should be more like ... Iraq?

Keanu Sai, a professor at the University of Hawaii, has a unique idea involving a transitional government for the "occupied" state.
'Our Hawaiian Spring'

Check out this Facebook app by the news site Civil Beat. If you're in Hawaii, the app can teach you about local candidates.