What candidates' wives are telling us 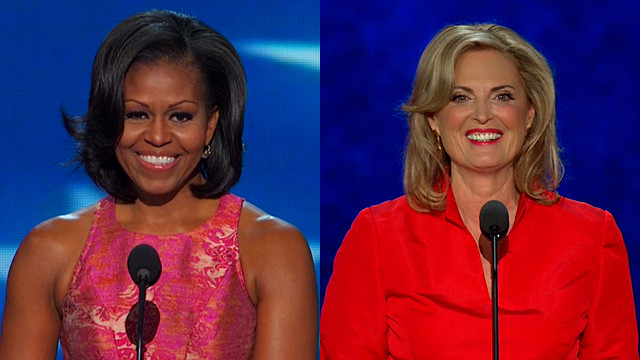 Editor's note: Catherine Allgor is a history professor at the University of California at Riverside and an adviser to the National Women's History Museum. Her latest book is "The Queen of America: Mary Cutts's Life of Dolley Madison" (University of Virginia Press, 2012)

(CNN) -- There was a time when first ladies and first lady hopefuls merely stood smiling beside their blue-suited husbands, waving to cheering crowds. Their "press" was limited to an article in a women's magazine, with perhaps a few recipes.

Now they are scheduled and much-anticipated speakers at the Big Game, the main event for one night of the party conventions -- as Michelle Obama was Tuesday evening.

In this piece, we'll see the video highlights of speeches by candidates' wives in the past 20 years and analyze their meaning.

Speeches by spouses are one of the many aspects of American electoral politics that puzzle the rest of the world. As a reporter from VG (The Way of the World), the largest newspaper in Norway, was heard to ask, "What do these women do that their men can't?"

In many western European contests, the voting public doesn't even know the names of the candidates' families -- but that's never been true in America. From the first, presidents' wives have been the focus of the public eye, much to the chagrin of Martha Washington, who never wanted her husband to be the leader of the new republic. Abigail Adams, wife of the second president, John Adams, had no time for "the people" and their curiosity about the family that led the nation. It would not be until Dolley Madison became the figurehead for her reticent and uncharismatic husband, James, that a new role for the first lady was born.

What the new Americans were looking for, as they huzzahed Martha Washington during her inaugural journey and hailed "Queen Dolley" at her famous Wednesday night parties, was reassurance. No one knew if this new experiment in liberty was going to work, whether the "United States" (which they thought of as plural) were going to hold.

Anxious for what we would call "psychological" messages, the people watched what first ladies wore and how they acted for clues about the country's male leaders. And the ladies obliged, enacting reassurance, authority, legitimacy, and (in Dolley's case) a touch of glamorous aristocracy.

Now when the wives of candidates brave the lights, the crowds, and the live coverage, they are given a different task. To answer the Norwegian reporter's query, what the women can do is to humanize their candidates.

We Americans believe that a wife can tell us about her husband in ways we can't discern from ads, stump speeches, or even debates: about his personal morality, his character, how he reacts to crisis -- in short, who he really is.

The first presidential candidate's wife and sitting first lady to address a convention crowd since Eleanor Roosevelt was Barbara Bush in 1992, who gave a testimonial to her husband, George H.W. Bush. "Character" was an issue then, one that only increased in importance during the Clinton years, so when Elizabeth Dole took to the podium in 1996 in support of her husband, Robert, she invoked his "honor." In fact, if you listen to these speeches, you'll hear lots of old-fashioned "value" words -- "decent," "steadfast," "trust," and yes, even "values."

Many candidates' wives use their convention speech to talk about character, with words like "decent" and "steadfast."

It is funny to hear Barbara Bush say this is a "tough audience," as conventions are notorious lovefests. But I think she was reacting to doing something most of us have nightmares about -- speaking in public -- with no role models to follow. Elizabeth Dole seemed a bit nervous, too, though as head of the American Red Cross, she was used to speaking to audiences and was probably already thinking about a run for the office herself.

Military service is almost universally seen as a sign of "character" in the United States. In 2008, Cindy McCain cited her husband, John's, distinguished record. Tipper Gore gave this tried-and-true strategy a twist, making Al Gore's doubt about what many in 2000 saw as an unjust war a point in his favor.

Opinion: What Julian Castro can do for Obama

It's one thing to tell a candidate's wife to humanize her husband -- but how to do it? One of the benefits of the "humanizing" tack is that it can gloss over pesky class differences, so a prominent theme in the stories that aspiring presidential wives tell are about the "early days," when the young couple was roughing it. Apparently what brings folks from both sides of the aisles together are broken-down cars.

But even alluding to family milestones and private moments will do the trick. Like sitcom dads, our presidential fathers are at their most appealing when slightly inept.

One of the goals of a candidate's wife's speech is to make her husband seem like more than simply a politician.

Above all, every political wife wants to give us a love story, to assure us that the couple has what Ann Romney called a "real marriage." It is easy to say that we all just love a love story, but these stories also appeal to us because we assume that a man who can inspire and deserve the love of a good woman is someone we can trust. Often the love stories begin like our favorite movies.

A candidate's wife knows that a quick story of how she met her husband usually makes him more likeable.

One intriguing feature about these "love at first sight across a crowded room" stories is the idea that the man in question is obviously and immediately a man among men. Yes, American voter, what you see is what you get, they seem to say, and if you like what you see, no need to look further or deeper! Consistency counts, too. The current presidential hopefuls are essentially unchanged from the outstanding young men at the dance or (in the case of the Clintons) in the library.

No one really questions whether the women who speak of their husbands are authorities on said spouses -- and they like to remind us, in little wifely digs (even Michelle Obama thought that Barack had a funny name), that they know the public man on the most personal level.

They don't actually mention his leaving laundry on the floor or the toilet seat up, but we convention watchers fill that in. But one of the reasons they have their spot on the program is that their husbands' campaign managers also think they have a second source of authority -- they are women.

For decades, the assumption was that wives voted the way their husbands did. Right around the time that presidential candidates' wives began addressing conventions, American politicos began to see that wasn't so.

Whether the terms are "soccer moms" or "gender gap," the "women issue" is part of the calculation. But it is tricky. Using the rationale "I'm a mom, you're a mom, too," the political wife can seem to address issues far beyond what is happening under her own roof. She has to be careful about addressing actual policy -- that, everybody understands, is beyond her expertise. Unless she is Hillary Clinton, of course.

It's often the responsibility of a candidate's wife to appeal to women voters, frequently with stories of motherhood.

When Hillary Clinton mentioned a personal issue, she immediately tied it to a legislative or policy change under her husband's first administration. She did that through her whole speech. Hers was the argument of a trained lawyer and, in hindsight, a future secretary of state.

It is not correct to say, however, that these women are mere pawns of their husbands and their handlers. They are being asked to serve the campaign's purposes, but they often have their own messages to send. Even while performing the role of the selfless, devoted wife, they tell us something about themselves and their own values.

Some candidates' wives use the speech to deliver their own messages, sometimes foreshadowing future runs for office.

With such a rich history of first lady rhetoric, Americans won't stop being fascinated by presidential candidates' wives. There is something both ruthlessly modern about this attitude and touchingly old-fashioned.

On one hand, we turn to the women because we understand that the male politician's public persona is a careful construction, even a performance. At the same time, in our quest to know the real man, we are not unlike our early American counterparts, who looked for clues about the men in the Roman simplicity of Martha Washington's gown and the crown on Dolley Madison's head.

The opinions expressed in this commentary are solely those of Catherine Allgor.