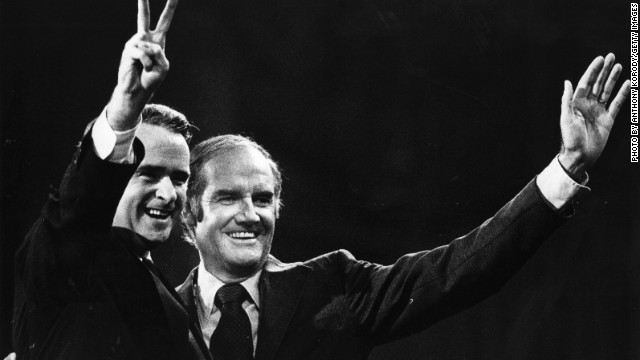 Editor's note: CNN Contributor Bob Greene is a bestselling author whose 25 books include "Fraternity: A Journey in Search of Five Presidents" and "Running: A Nixon-McGovern Campaign Journal." He appears on "CNN Newsroom" Sundays during the 5 p.m. (ET) hour.

(CNN) -- Outside, there was an old black dog next to a tree. The dog kept barking.

Thomas Eagleton, in a little pine-paneled auditorium/recreation hall in the Black Hills of South Dakota, was, with understandable reluctance, discussing his medical history, and his halting words kept being interrupted by the sounds of the dog's barks.

It's curious what sticks with you when you recall turning-point moments in presidential election history. Forty summers ago Eagleton, a U.S. senator from Missouri, had been selected by the Democratic candidate for president, George McGovern, to be his running mate. The offer to Eagleton had been made on the telephone during a hectic Democratic National Convention in Miami Beach; the conversation between McGovern and Eagleton had lasted less than two minutes.

Eagleton, during the conversation, did not mention to McGovern that on three occasions he had been hospitalized for treatment of depression, and that on two of those occasions he had undergone electroshock therapy. In seeking help, Eagleton had done what people of compassion and wisdom -- including politicians -- often advocate for those who are suffering from his kind of anguish. They counsel that mental illness is as real as any other kind of illness, that it can be effectively treated, and that there is no stigma in trying to get better.

But presidential politics is a take-no-prisoners game, and a vice president is always that one famous heartbeat away from the Oval Office. Eagleton had flown to South Dakota, where McGovern was on a post-convention vacation, to belatedly break the news to the candidate, and then to the public. It was a day that would forever change the way presidential candidates select their running mates.

Opinion: Being VP is just like being a lesser Kardashian

Right now Mitt Romney is in the process of choosing his own running mate, and the intense, virtually forensic, scrutiny his advisers have undoubtedly been giving the various prospects has a direct link to the McGovern-Eagleton drama of 1972. The hasty way that ticket came together has served as a cautionary tale for candidates in the ensuing years; two recent books about Eagleton -- "The Eighteen-Day Running Mate," by Joshua M. Glasser, and "Call Me Tom," by James N. Giglio -- have revisited the story in the context of 21st-century presidential politics, and a recent front-page story in the New York Times drew a straight line between the Eagleton affair and the way running mates are vetted today.

For those of us who were there in that rustic auditorium in 1972, the memory, in many respects, is that of a day of deep human sadness. Eagleton was a headline name, yes, but he was also a man, and to be within those walls on an otherwise quiet day in the Black Hills was to witness moments bleak and melancholy.

McGovern, a U.S. senator from South Dakota, was spending his vacation in a cabin in a state park. We who were assigned to cover him were lodged at an unprepossessing place at the bottom of the hill in the nearby town of Custer -- it was called the Hi-Ho Motel -- and the week was supposed to be uneventful. McGovern was there to relax, not to make news.

Pawlenty on being vice president

The campaign staff of McGovern's opponents on the Republican side, President Richard Nixon and Vice President Spiro T. Agnew, was portraying McGovern as soft and weak; McGovern, who as a B-24 bomber pilot in World War II had flown 35 combat missions over enemy lines and had been awarded the Distinguished Flying Cross, was having to fend off the implication that he was somehow spineless. The controversy he didn't see coming was Eagleton's health issues.

This was in a pre-Twitter, pre-Internet, pre-cellphone era; there weren't even telephones in the guest rooms at the Hi-Ho. When we were told that the candidates would like us to come up the hill to the state park, we thought it must be for a so-called photo opportunity, and nothing more.

Eagleton and McGovern arrived at the auditorium with their wives. Eagleton moved among tourists who were standing outside, shaking hands and signing autographs. McGovern, though, looked pensive. He walked into the auditorium without saying a word to anyone.

McGovern opened the session by saying what a pleasure it was to have Tom and Barbara Eagleton in the Black Hills. The few of us present barely took notes. Some of the tourists from outside had wandered into the back of the auditorium, and when McGovern introduced Eagleton, they applauded. Eagleton made a mild joke:

"I don't know if the applause is because McGovern quit talking, or because I got up to talk."

And then he said it.

The hospitalizations. The electroshock treatments.

It was such an incongruous moment, in the bucolic setting. It came out of nowhere. Eagleton began to perspire, and the dog's barks echoed off the wooden walls, and seconds began to feel like days. "I don't relish standing here before these lights and 30 or 40 newsmen, discussing my health," Eagleton said. "This isn't the most pleasant moment of my life."

And he acknowledged that he had first discussed all of this with McGovern only hours before, here in the state park.

The country, and the world, weren't watching; there was no live telecast. The reporters had no quick way to get the news out -- no phones handy. Network television correspondents had to put their footage into helicopters to be flown to Rapid City, South Dakota, the closest place from which to transmit video. What had just happened was like a violent flash of lightning, with the delayed thunder, we all knew, soon to come.

It did. Once reporters got to telephones down the hill in Custer, and the news thus reached the rest of the country, the McGovern campaign publicly avowed support for Eagleton, but the presidential campaign was, in effect, over. People from all over the United States were sending telegrams -- the speediest way to express an opinion -- to McGovern, many of them brutal in tone. The one Western Union telex receiver in the area was not up in the state park with McGovern, but in the makeshift press room of the Hi-Ho. So on the same machine on which the reporters were receiving messages from their offices, they were seeing the telegrams meant for McGovern. It wasn't pretty.

Eagleton stepped down from the ticket within a week, and was replaced by Sargent Shriver. The McGovern-Shriver ticket lost to Nixon and Agnew in the largest landslide in presidential history. You never can know how things will work out, though; both Nixon and Agnew would resign from their offices before their terms were finished, and McGovern would eventually leave the Senate after losing one of his reelection bids. Within 10 years of that somber day in the Black Hills, the only person from either original ticket still serving in national political office would be Eagleton. He would be a senator from Missouri until his retirement in 1987; after that he would return home and resume his life as a widely respected member of the St. Louis community until his death in 2007.

The lessons of that long-ago summer? Probably just that presidential candidates these days, in choosing their running mates, tend to keep in mind the same thing that beginning medical students are always taught:

First, do no harm.

As if that is easy.