He can afford it, she can't: Couple's health care dilemma 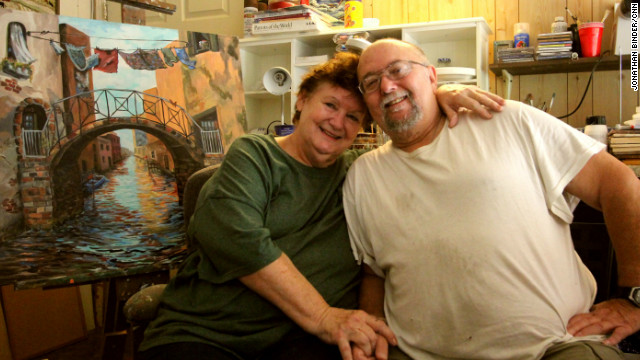 Janet and Richard Copeland say one of their few disagreements as a couple is over the Affordable Care Act.
STORY HIGHLIGHTS

Mayflower, Arkansas (CNN) -- Janet Copeland and her husband, Richard, both say they agree almost all the time, with one exception: The Affordable Care Act, President Barack Obama's health care legislation.

"We're kind of split on that one," Janet says. "It's one of the few heated discussions we have. Right now, I'm at the point where I've already told (Richard) that 'OK, if the person you want gets elected, sit back and watch.' We're in a little standoff about that one. There's never blood drawn, but it gets interesting."

"I did not like the way it was shoved down our throats," Richard responds. "What about the people that can't afford health insurance? What part of not being able to afford it doesn't our president understand? There are people out there working just to put bread on the table, and now he's saying 'I don't care if your family eats or not.' "

Richard's wife is having a hard time paying her health insurance.

According to Families USA, a liberal-leaning health insurance advocacy group, Janet Copeland's situation is common. Families USA reported that before the passage of the ACA, some 2.3 million American families lost their health care each year because of price. The group believes the ACA will help families from being priced out of health insurance coverage.

He says it's unfair to penalize his wife if she decides not to pay for coverage. He supports GOP candidate Mitt Romney. And Richard has health insurance through the Veterans Administration. But Janet, who is quickly using up her life savings to pay her monthly health premium, is fully supportive of Obamacare, and supports Democratic President Barack Obama in his re-election bid.

But in ironic fashion, the reason this debate has come to the Copeland household is because the couple decided to get married.

Watch behind the scenes interview with Janet Copeland

After getting married, the couple moved into a ranch style home on the banks of Lake Conway, just north of Little Rock. But before they started a life together, Janet Copeland was married for almost 50 years. The Arkansas native married her ex-husband at age 15. Janet raised two children, maintained the house, and painted portraits and landscapes on the side.

"I held one job during my marriage, working as an art instructor," Janet says. "It wasn't for very long, and it wasn't for many hours per week."

After a long, unhappy marriage, Janet got divorced in her mid-60s. During the separation, Janet learned she did not work enough during her life to qualify for Social Security or reduced cost Medicare. So, she negotiated with her ex-husband, and he agreed to give her a small lump sum of money, along with subsidizing her health care premiums. While she was single, Janet Copeland paid just over $200 per month.

"Then I got married, and the whole thing changed," Janet says.

Now, she pays $703 per month. When she remarried, Janet's ex-husband no longer paid any part of her health premium. She couldn't qualify for Medicaid, the government's health care program for the poor, because she had to count Richard's retirement income of about $2000 per month. So, Janet had to turn to her life savings.

"What I do is I've got it set up where I get $1,000 a month, it's like a trust, to pay my insurance and everything else," Janet says. "It won't last me for a lifetime, I think, but right now, my insurance is taken care of."

"We've always had candidates with different proposals, but we've never had an election which would really determine whether a whole set of benefits and consumer protections were at stake, where the line was so clearly drawn," he adds.

How have you been affected by the health care ruling? Share your story with CNN iReport.

Wright says Janet Copeland could benefit from some of the provisions of the Affordable Health Care act, like the expansion of Medicaid. The health care program serves low income citizens, and is run jointly by the federal government and the states.

Yet, it's unclear how those provisions will be applied in the Copeland's home state of Arkansas. Democratic Gov. Mike Beebe will ultimately have to approve any expansion of Medicaid and Medicare in his state. Those are the provisions most likely to help Janet Copeland lower her Medicare premiums. Yet, the Democratic governor has issued statements indicating he is still studying the law and the recent U.S. Supreme Court ruling.

Many Arkansas Republicans have taken the position of Gov. Rick Perry of Texas. The former GOP presidential candidate has long argued that Obamacare provisions, like expanding Medicaid, will bankrupt individual states.

"I will not be party to socializing health care and bankrupting my state in direct contradiction to our Constitution and our founding principles of limited government," Perry said in a statement shortly after the U.S. Supreme Court ruling.

Now that the U.S. Supreme Court has ruled Obamacare is constitutional, Anthony Wright of Health Access says the outcome of this presidential election will determine whether the law is ultimately fully enforced. From a health care perspective, Wright says this election is "the most important" in U.S. history.

Yet, despite the potential importance this election may have on their day-to-day lives, Janet and Richard Copeland may decide, as a couple, simply not to vote.

"We'll just end up canceling each other out," Janet says. "But if we do decide to skip the vote, at least we're doing it together. Life is better with someone you love."