Bumming a smoke from the queen: When the security bubble bursts 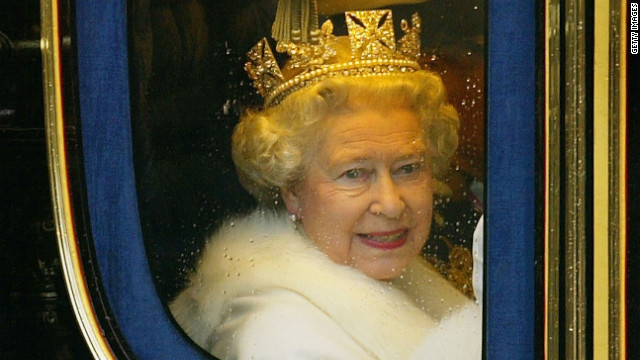 Queen Elizabeth II looks out of the window of her horse-drawn carriage as she leaves Buckingham Palace.
STORY HIGHLIGHTS

Editor's note: CNN Contributor Bob Greene is a bestselling author whose books include "Late Edition: A Love Story" and "Once Upon a Town: The Miracle of the North Platte Canteen." He appears on "CNN Newsroom" Sundays during the 5 p.m. (ET) hour.

(CNN) -- So there he was, sitting on the queen's bed, wearing a soiled T-shirt and jeans, holding a broken ashtray and bleeding from a cut on his hand:

A man named Michael Fagan, who was 31 at the time, had climbed a wall of Buckingham Palace, crawled through an open window and made his way to the bedroom of Queen Elizabeth II, who was sleeping.

When she awakened to find the guy sitting there staring at her, it is fair to surmise that she was not pleased.

Especially when Fagan asked her if she had a spare cigarette.

This happened on July 9, 1982, generating international headlines, and only because the queen survived unharmed does it read like a comedy of errors. The errors were plentiful, including the queen's repeated attempts to summon help, at first to no avail.

But now, 30 years later, during the celebration of the Queen's Diamond Jubilee in London this week, it is instructive to recall the monarch's rude awakening by the bleeding intruder who was in search of a smoke. We assume that the handful of people at the absolute pinnacle of life -- the queen being the lead example -- have the means and the staffs and the security teams to insulate themselves from indignities that mere mortals have to put up with.

And, most of the time, they do.

But when there are breaches of presumed privacy, boy, does it cause a commotion.

We don't have to go back in history to look for instances of this. Just consider what Pope Benedict XVI is thinking right now in the wake of the news that his butler, Paolo Gabriele, has been arrested, accused of having the pope's confidential documents in his home.

William and Kate arrive at the Thames

The queen rides to the flotilla

The queen departs the pageant

The investigation is still playing out in Rome, but if the allegations prove true and it turns out that Gabriele, one of the few people who had access to the pope's living quarters, including the pope's desk, lifted the information, then the pope will know with certainty that even with his rarified position, he can't count on personal privacy behind the guarded walls of the Vatican.

In the United States, President Ronald Reagan, after an assassination attempt on a Washington sidewalk in the second month of his first term, was assured that efforts would be redoubled to make certain no one who wished to hurt him would be able to get that close again. Nancy Reagan was said to be especially adamant that her husband be kept out of harm's way.

So it was almost beyond belief one afternoon in April 1992 when Reagan, out of office but still being protected by the Secret Service, was in Las Vegas to receive an award and was accosted right onstage.

Reagan had just been given the award -- a 2-foot-high crystal statue of an eagle -- when a man named Richard Paul Springer, 41, walked through the ring of security around the former president and onto the stage, grabbed the crystal eagle, smashed it forcefully to the floor (with Reagan being struck by the flying glass), and commandeered the microphone.

Reagan was hustled offstage by the Secret Service, and Springer, too, was hauled away. But there was widespread incredulity that someone could get past all the federal, local and private security that is always on hand for an appearance by a president or former president.

Some breaches are more comical than frightening. Elvis Presley was famously kept away from the gazes and grasping hands of his admirers when he was not performing. His privacy at home was especially important to him.

But his old friends and employees sometimes tell the story of what happened when a crate arrived at his home with ventilation holes punched into it. The delivery service said that fans had sent him, as a gift, a top-pedigree dog.

So, according to the story, the crate was carted into the house, and was opened. Out climbed two young women. They were escorted off the property.

The persistence of those who infringe upon the privacy of the exalted can be astonishing. It turned out that Michael Fagan, the queen's uninvited visitor, had managed to sneak into Buckingham Palace a month earlier and had helped himself to a bottle of wine. For that he was charged with theft -- but was not charged criminally for the subsequent trespass that took him to her sleeping quarters, because at the time it was considered a civil violation.

And Squeaky Fromme, sent to prison for a failed assassination attempt on President Gerald Ford in 1975, wrote to him while she was incarcerated -- a letter described as "strange" by Ford. She was able to reach the president once he had left office -- the letter made it to his home, and he read it -- even while she was locked away from society.

The oddity of these encounters that happen when the personal space of the most protected people on the planet is violated -- the bizarreness of the moments when they are reminded that nothing in life is guaranteed -- can be both mesmerizing and haunting.

Just ask Queen Elizabeth, in the unlikely event you ever get close enough.

But you probably shouldn't ask her for a cigarette.