Could a computer write this story? 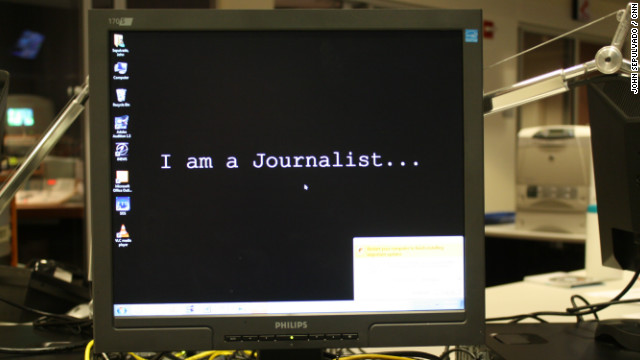 But can an app tell a story?

Chicago-based company Narrative Science has set out to prove that computers can tell stories good enough for a fickle human audience. It has created a program that takes raw data and turns it into a story, a system that's worked well enough for the company to earn its own byline on Forbes.com.

"We did college baseball," Hammond recalled. "And we built out a system that would take box scores and historical information, and we would write a game recap after a game. And we really liked it."

Narrative Science then began branching out into finance and other topics that are driven heavily by data. Soon, Hammond says, large companies came looking for help sorting huge amounts of data themselves.

"I think the place where this technology is absolutely essential is the area that's loosely referred to as big data," Hammond said. "So almost every company in the world has decided at one point that in order to do a really good job, they need to meter and monitor everything."

Narrative Science hasn't disclosed how much money is being made or whether a profit is being turned with the app. The firm employs about 30 people. At least one other company, based in North Carolina, is working on similar technology.

That's an idea that's unsettling to some journalism experts.

Kevin Smith, head of the Society of Professional Journalists Ethics Committee, says he laughed when he heard about the program.

"I can remember sitting there doing high school football games on a Friday night and using three-paragraph formulas," Smith said. "So it made me laugh, thinking they have made a computer that can do that work."

Smith says that, ultimately, it's going to be hard for people to share the uniquely human custom of story telling with a machine.

"I can't imagine that a machine is going to tell a story and present it in a way that other human beings are going to accept it," he said. "At least not at this time. I don't see that happening. And the fact that we're even attempting to do it -- we shouldn't be doing it."

Other experts are not as concerned. Greg Bowers, who teaches at the Missouri School of Journalism, says computers don't have the same capacity for pitch, emotion and story structure.

"I'm not alarmed about it as some people are," Bowers said. "If you're writing briefs that can be easily replicated by a computer, then you're not trying hard enough."