New York vs. Los Angeles: For all its grit, NYC 'sparkles' 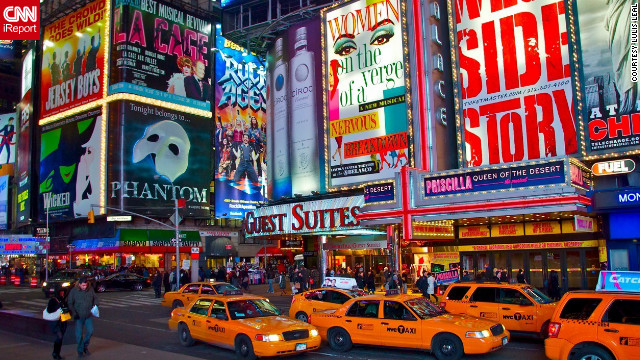 "There are so many versions of (New York) happening all at once," writes CNN's Kat Kinsman in praise of her favorite city.
STORY HIGHLIGHTS

Editor's note: This piece is part of a series of "city smackdowns" pitting rival cities against each other and letting you decide which one's best. Read the story below and its counterpart defending Los Angeles, then visit CNN iReport to defend your city of choice!

New York (CNN) -- New York City is crowded, cramped, expensive and dirty. In summertime, the walk down subway stairs often feels like a descent into a Gila monster's mouth. In the winter, exhaust and dog-stained snow piles turn the streets to grim, dim, narrow canyons. There are rats with the size and agility of house cats, the transit system is often thwarted by mild rainstorms, and Donald Trump is allowed to roam about as he pleases.

There is nowhere else on the planet I'd rather call home.

For all the inconvenience and expense, I am still dazzled daily by this city. It sparkles through the grit and reminds me why I moved here 16 years ago on the counsel of Joe Giordano, a painting professor who told students that we owed it to ourselves to try. Six months, he told us. If you're really serious about being an artist, you'll try living in New York for at least six months. For some of you, it might be two years or 10 or even more, but you have to try.

As it turned out, painting wasn't what was calling me, but the rhythms of New York matched the weird way my heart had been beating since birth. I stayed.

I struggled, froze and starved for the first few years I was here -- stitching together whatever scraps of jobs I could so I could remain. In another town, I might have had an apartment with heat that worked, in a neighborhood where a band of teenagers didn't rob me of my last $7 as I trembled on my doorstep.

I might have walked around, content, carefree, filled with more than a cup of soup and a stale roll (they were half price later in the day), and not hacking from the bronchitis I had neither the insurance nor funds to treat.

Agree or disagree? L.A. is a 'heavenly place'

But then I wouldn't have looked over and seen Led Zeppelin's Robert Plant bobbing his mammoth and legendary head to my friend's music as he poured his heart out in an East Village club. I would not have crashed headlong into a beatifically smiling Joey Ramone on the sidewalk on the stroke of my 24th birthday or been plucked from a SoHo health food store to act in a car commercial.

I would not have celebrated the last 11 Thanksgivings with my favorite drag queen, been naked with 200 other women for a group photograph in Grand Central Station, gotten tipsy with an archduchess, met my husband, found the career that sustains my life, and stood on my Brooklyn rooftop, staring over at the Manhattan skyline in gratitude for all its small and massive magic.

That skyline has changed since I made this place my home. Ten and a half years ago, I stood on that rooftop and watched in horror as columns of smoke filled the space where two towers stood. A madman tried to rip the heart out of the city, and we would not let him have it.

My fellow New Yorkers and I mourned our dead, nursed our wounds, and our pulse thrummed more fiercely than ever. We made art and music and food and did the previously unthinkable: We broke out of our carefully constructed bubbles -- the ones that allow us to live side by side, smashed up against each other in subway cars and separated by tissue-thin apartment walls -- and we talked to each other. "Are you OK?" "Can I help you get home?" "Do you need a tissue?" "Where were you when they fell?" "Really, are you OK?"

One of the most glorious things about New York is that there are so many versions of it happening all at once, at all hours of the day. Many people speak of a quintessential New York experience -- a Yankees (or Mets) game, a carriage ride through Central Park, a Broadway show, ascending the Empire State Building to take in the view, a bit of shopping, a schmear, a slice and a wildly overpriced pastrami sandwich. That's one way to do it. There are so many more.

Photos: Scenes from the Big Apple

For the price of a Metrocard (that's $2.50 for a single ride, $29 for a seven-day unlimited), I can wade into the Atlantic Ocean at Coney Island, knock back ice-cold vodka shots while watching septuagenarian Russian men test the physical boundaries of their Speedos farther down Brighton Beach, or gawp at one of the world's most impressive Erte and Chagall collections while chowing down on a killer Reuben at the Mill Basin Kosher Deli.

If I decide to leave Brooklyn (though really -- why would I?), I can stuff my head with contemporary art in Chelsea or classics at the Metropolitan Museum of Art, nurture my soul at the Bronx Botanical Garden or Early Music at the Cathedral of St. John the Divine, or fill my face yet again at the Colombian, Dominican, Indian, Filipino, and countless other nationally specific restaurants along the 7 train's corridor.

And sometimes, I don't need a reason at all. I'll just walk -- briskly, the way a New Yorker should -- but nowhere in particular. I trust this city and I know I'll end up where I need to be.

A few of my New York favorites:

Standing under the 94-foot whale at the Natural History Museum

Grocery shopping at Fei Long Market in Sunset Park's Chinatown, Buon Italia in the Chelsea Market or Kalustyan's on Lexington

Fashion-gawking at the bar at Red Rooster in Harlem

Movies on the big screen at the Ziegfeld Theater

Egg and cheese on a roll from any corner deli, burrata from Di Palo, pierogies from Veselka, trucha marinado at La Pequeña Colombia, whatever Ali tells you to eat at Kabab Cafe, sour curry at Sripraphai, tacos at Nuevo Mexico, fishcakes and spaghetti at the Neptune Diner (ask for Frankie's section), or prime rib hash and a single malt at the bar at Keens

Temple of Dendur at the Metropolitan Museum of Art

And yeah -- the view from the Empire State Building. We all pretend we're too cool to care, but really -- you'd have to be made of stone not to think it was one of the most glorious things you've ever seen.

Got a favorite only in New York experience of your own? Share it with CNN iReport, won't you?

Are you a hardcore New Yorker or surfing Angeleno? Vote in the poll above, defend your city of choice on CNN iReport, and share your tips for visitors. We'll reveal the winning city in an upcoming story.