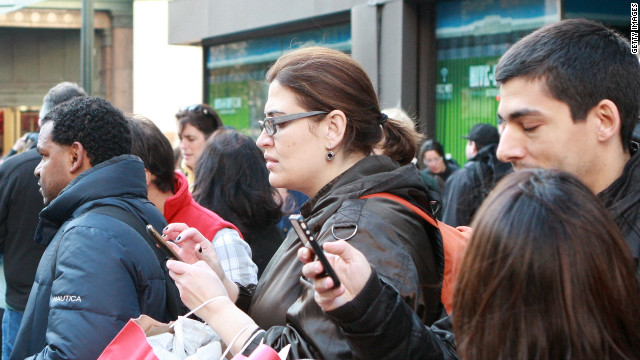 A Gmail outage last week left millions unable to see their e-mail, bringing what Bob Greene said may have been a relief for many.
STORY HIGHLIGHTS

Editor's note: CNN Contributor Bob Greene is a bestselling author whose books include "Late Edition: A Love Story" and "Once Upon a Town: The Miracle of the North Platte Canteen."

(CNN) -- In a long line at an airport security checkpoint, the man in front of me wearily reached into his travel cases and began to unload his electronic gear into the gray plastic bin.

He had his laptop computer, two cellphones, a Kindle reading device and some sort of digital music player, each with its own power cord. He probably didn't need to throw the cords and chargers into the bin with the other devices, but he did anyway.

So, with all the devices and cords piled on top of each other, the bin moved along the conveyor belt. The TSA agent standing watch asked the business traveler to put some of the gear in separate bins. He complied.

I said to him:

"Did you ever see 'Goldfinger'?"

"You know that scene where Q, the equipment master, outfits Bond for his upcoming secret agent assignment?"

"Who do you think carried more electronic equipment?" I said. "You, or Bond?"

He laughed, and then set off to retrieve his digital arsenal.

I thought about him last week, when millions of Gmail users found out that, without notice, they were temporarily cut off from Google's e-mail service.

Perhaps you were one of them -- one of the millions who, for part of last Tuesday (the outage was said to be for more than an hour), were unable to send or receive letters on your Gmail account.

And if you were among them, did you find yourself becoming annoyed, irritated -- maybe, against your better judgment, a little panicked -- or was there a part of you that felt oddly, secretly relieved?

Google at first said the glitch affected "less than 2 percent" of the users of the service; later the company revised that estimate: "We've determined that this issue affected less than 10% of the Google Mail users who attempted to access their accounts during the affected timeframe."

Ten percent would seem to be a relatively small portion of users. But it has been reported that Gmail -- which is provided at no cost to those who use it -- is utilized by some 350 million people worldwide. So if 10 percent of them could not send or receive e-mails, that, potentially, could be as many as 35 million people.

It's at times like these that we can stop and think about how accustomed we have become to assuming we can always be reached on every one of the multiple digital pathways we choose to use. That assumption has become, if not exactly a birthright, an acquired right.

And when we are reminded that we really don't know very much at all about how all of this works, and that we can be cut off from it for reasons just as enigmatic and unexplained as are the electronic mysteries that bring it to us in the first place....

Well, once the Gmail service was up and running again last week, this is what the cartoonist Brian McFadden sent out in a Twitter message to his friends and followers:

"In hindsight, gnawing off my foot while Gmail was down might've been an overreaction."

What I often think about when stories like the Gmail outage or cellphone disruptions pop briefly into the news is the World War II guys who, for four years and more, never once heard the voices of the people they loved: their wives, their parents, their children. Four years away from their homes in the United States with only the most sporadic of overseas mail delivery, no phone calls at all, having to accept on faith that the people who meant the most to them were doing all right.

Yet somehow, in the long silence, they made it. Most of them.

There's no reason at all to mourn for the pre-digital days; they were isolating and could be awfully lonely, and the long silence is never coming back.

But today, whenever there is an unanticipated short silence -- cell service goes temporarily dead, e-mail or text messaging or social networks cease to function because of an electronic burp somewhere -- it gives us the occasion to reflect upon how quickly we have gotten used to the new way, with our messages coming in and going out continually and seamlessly, day and night. Providing us the promise of never -- allegedly -- having to feel alone.

Maybe, if you were one of the people who discovered that, however briefly, your Gmail could not come in or go out, you took the opportunity to discreetly celebrate a little bit. There was a "Do Not Disturb" sign posted on at least one door of your life, and no one could blame you for not being available.

A little silence, digital or otherwise, can at times feel like a treat.

Meanwhile, somewhere out there, the tired James Bond business traveler, and all his traveling brothers and sisters, are dumping their electronic sending-and-receiving stations into yet another security-line bin.

Silence -- even when it's welcome -- is ultimately a fickle and fleeting illusion.