Why Dean Martin's still so cool 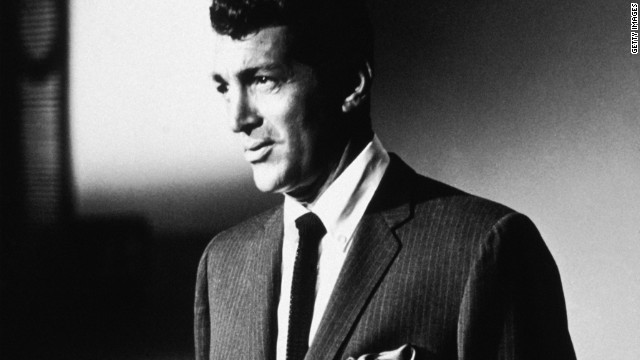 Years after his death, Dean Martin's relaxing singing voice is still a presence on TV, in shopping malls and restaurants.
STORY HIGHLIGHTS

(CNN) -- A few years ago a group of us were having dinner at a steakhouse, and among the people at the table were the terrific sports columnist Mike Downey and his wife, Gail Martin. The manager of the place came over to say hello; introductions were made.

At one point in the evening I was making my way to the men's room and ran into the manager again. I said to him, "That Gail Martin you met? I think you're probably familiar with her late father."

"His first name was Dean," I said.

Within minutes the taped music that had been playing in the restaurant stopped, and a new tape was substituted -- a Dean Martin tape. Any steakhouse worthy of the name has his music on hand.

There it was, coming out of the ceiling: "You're nobody till somebody loves you. ..."

And just the sound of it -- just that instantly recognizable deep tremolo of Martin's voice, so warm and easy and seemingly effortless -- had an effect on the room. It was as if someone had sprayed some kind of invisible muscle relaxant into the air. People visibly loosened up, they smiled a little more, it was like a friend had arrived and had said: Quit worrying about things. Life doesn't have to be so serious.

He's been gone for more than 16 years now -- he died on Christmas Day, 1995 -- yet he seems to get only bigger as the years go by. I've been noticing it in recent days: That voice keeps drifting out of radios, out of television sets, out of hidden speakers in malls and coffee shops and clothing stores ... it's as if his voice, and his face, have by some sort of silent national acclamation been voted the quasi-official antidote for tense times. In a lousy mood? That changes as soon as you hear: "When the moon hits your eye like a big pizza pie. ..."

The coolness of Dean Martin seamlessly crosses generations; young guys heading for a weekend in Las Vegas with their buddies understand his appeal just as viscerally as their grandparents do. He never, in life, actively campaigned for this role -- the eternal model of coolness -- and in death it has just seemed to be bestowed upon him naturally.

His friend Frank Sinatra may have liked the image of being Chairman of the Board, but the core of Martin's enduring allure is that not only did he not want to be chairman, he didn't even want to serve on the board: It would mean that he would be cooped up in some boardroom for meetings when he'd rather be out playing golf. The sight of him in a tuxedo -- he wore it as comfortably as most men wear a pair of pajamas -- says to people who weren't even born when he was at the height of his fame: Take a deep breath and let yourself grin. Your problems can wait until tomorrow.

He didn't like to rehearse, his friends said, because he knew he would do just fine without it. As he grew older he didn't feel the need to endlessly seek out applause, because he had been so famous for so long -- his nightclub and motion picture partnership with Jerry Lewis, his own movie career, the Rat Pack years, his success as the host of his television shows, his sold-out concerts -- that he'd heard enough ovations to last a lifetime. His ease onstage made his audiences feel at ease, too; he seemed as at home in front of a packed Vegas concert crowd as he was in the den of his own house (his line at catching his first glimpse of an audience: "How did all these people get in my room?").

It had been a while since I'd talked with Gail Martin, but I called her the other evening, and she told me that, like the rest of us, she is forever encountering her dad's voice unexpectedly in public places: "It's always reassuring, it's always nice. I was in a store one holiday season, and there was a Christmas tape playing. A choir of some sort was singing a Christmas carol, and that ended and then there was my dad: 'Oh, the weather outside is frightful...' I just smiled a quiet smile. He's always there."

She said the reason he appeared so relaxed while working was because it wasn't an act. "Nothing seemed to bother him. And if something ever did, he sure wasn't going to bother anyone else with it." She said that when she was a girl and was in a bad mood at home, her dad, in that voice of voices, would say to her, without a bit of rancor: "Go up to your room if you're going to pout. Come on back down when you're happier."

In Florida the other night I was walking along the street and thought I heard him singing. It was a restaurant with an outdoor terrace; a local duo -- they billed themselves as Frank and Dean — was performing in front of one of those digital music machines that can replicate the sound of a full orchestra.

The shorter of the two was singing Sinatra songs, the taller was doing Dean Martin. The physical resemblance wasn't really there, but the songs were right. Whenever it became the Dean imitator's turn for a tune, he would jack the vibrato in his vocals into overdrive: "Everybody loves somebody sometime ... "

And the thing is, the people at the cafe were gravitating toward him. They were on their feet, beaming, moving closer to the microphone, some of them dancing, some just blissfully staring, seduced by the sound.

The singer looked as if he was accustomed to getting this reaction. It turns out that it's cool to be Dean Martin even when you're not really Dean Martin. Ain't that a kick in the head?