A power plant, cancer and a small town's fears 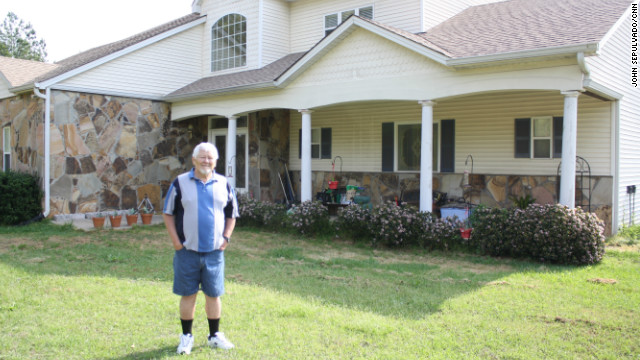 Robert Maddox of Juliette, Georgia, poses on his property. Maddox says Georgia Power expressed interest in buying his property after leveling the house next door and sealing the water well.
STORY HIGHLIGHTS

Juliette, Georgia (CNN) -- "Y'know they're going to tear that house down, don't you?"

Robert Maddox has just opened his front door to let me in for the third time in three weeks. During each visit, Maddox talks about the house next door. It looks like the other houses in this rural middle Georgian town: two stories high, with a stone face and long rooftop arches, sitting on a few acres of wooded hills.

Maddox turns toward his dining room, walking by the oxygen tank he uses when he makes the 300-foot trek to the two-lane road where he picks up his mail, and shares the gossip he heard at the local market an hour earlier.

"Yeah, someone said Georgia Power will tear it down to the ground sometime this week."

Robert Maddox is a bulky man with gray hair, a deeply lined face, squinty eyes and a thick Southern accent. He lives in Juliette with his wife, Teresa. The two of them invested their life savings building their home. It's a large ranch house on several acres, and the plan was the two of them would leave it for their sons and grandchildren. They gave up that dream after Maddox's mother developed a rare form of ear cancer and died after living at the home for three years.

"I'm not going to bring my grandchildren up in this," Maddox says. "Anybody who does would be a fool, I think."

The problem, Maddox explains, is now he and his neighbors are getting sick. For Maddox, the first signs of trouble would come in the middle of the night, when he would wake up with nose bleeds mixed with clear mucus. Then his muscles started twitching, and then he got kidney disease, and then sclerosis of the liver.

His doctor wondered whether Maddox was an alcoholic.

"I don't drink," Maddox says dismissively before ticking off his other health problems:

"I also had a gallbladder that had to be removed, and they give me a one in six chance of surviving that. And right now I could walk from here to my mailbox and I'm out of breath."

The neighbor who used to live in the now-empty house has abdominal cancer. In the house two doors over, a once healthy woman has a form of dementia that's left her "unrecognizable," according to Maddox.

"Besides us all being sick, we've all been approached by Georgia Power, with them looking to buy us out" Maddox says. "And in that house next door, [Georgia Power] has sealed the well."

Maddox leans away from his kitchen table, crosses his arms and sighs.

"Y'know it's coming from over there," he says, nodding in the direction of one of the largest coal plants in the world, right across the two lane highway where Maddox collects his mail.

Maddox believes the coal plant is making people sick, and the "it" he refers to is cancer.

A plant's history of purchasing properties 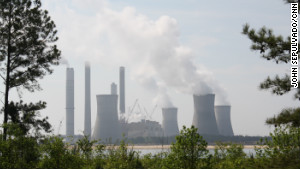 Plant Scherer in Juliette, GA is the largest producer of greenhouse gasses in the country. Many people in the town believe the plant is the source of sickness in the community.

Compared to other coal-fired power plants in the United States, Plant Scherer is Colossus. Two 1,000-foot chimneys can be seen towering over the pine forests from miles away. The plant, according to the U.S. Environmental Protection Agency, is the largest producer of greenhouse gasses in the country.

The plant generates the fifth-most power in the nation, according to government statistics. Georgia Power owns a portion of Scherer, and manages the plant on behalf of five other utility stakeholders.

CNN has confirmed at least two houses across from the plant have been bought. Meanwhile, another 10 owners of nearby houses claim Georgia Power representatives have approached them with offers to purchase their property.

The first house purchased belonged to a woman suffering from cancer. In public statements before the purchase, Gloria Dorsett told neighbors she had breast cancer -- cancer she said her doctor had diagnosed as environmentally caused. Neighbors say after Dorsett wrote letters to the local paper, Georgia Power bought her home, leveled it, sealed the on-site water well, and planted tiny pine saplings on the property.

CNN reached the family, who refused to comment for this story.

The second house, also across from Plant Scherer, was owned by a couple. According to neighbors, the woman suffered from a form of stomach cancer, and she told neighbors before the buyout it too was diagnosed as environmentally caused. CNN reached that family as well -- they, too, refused to comment.

A Georgia Power spokesman tells CNN the company was "unaware of any health problems" around Plant Scherer.

Yet, three homeowners across from the plant showed CNN business cards left by Georgia Power employees indicating the company was opening up discussions to purchase their homes.

When presented with this contradiction, Williams holds firm.

"We have not been approaching people," Williams said.

Donna Welch lives a few miles from Plant Scherer. Middle-aged and gregarious, Welch suffers symptoms similar to those of Robert Maddox and his neighbors. And as with Maddox, Welch's doctor also asked if she had a drinking problem.

Curious to see if there were any toxins in her body that could be causing health problems, Welch had her hair checked. Hair stores chemicals and toxins absorbed in the body.

"My hair is 68 parts per million uranium," Welch says. "And then my husband started breaking out in disfiguring hives. His kidneys started acting really bizarre."

Welch says her doctor linked the family health problems to uranium poisoning. The uranium was traced to a water well on her property. That discovery led to more robust testing by University of Georgia researchers, who found more than 20 homes in the area with high concentrations of uranium.

Hair testing revealed that another Juliette resident, Jamie Worley, had high concentrations of uranium in his hair. Worley developed liver cancer and died, although it's unclear whether the uranium triggered the cancer.

The researchers say they haven't traced where the uranium comes from, although EPA officials said they believed the contamination to come from underneath a layer of granite 70 miles away near Atlanta.

Uranium is also heavily concentrated in coal ash. Plant Scherer produces hundreds of acres of coal ash per year. The waste is stored in a 900-acre pond surrounding the plant. Over the past 30 years, several studies have found coal ash more radioactive than the waste from nuclear power plants. 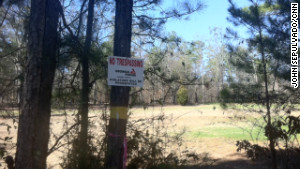 Georgia Power now owns the lot belonging to a cancer patient in Juliette, Georgia. The plant has leveled the ground, sealed the well, and planted pine saplings on the lot.

So when Georgia Power sealed two wells, many in the community began to suspect the massive coal plant could be causing the contamination and the illnesses. One of the most commonly accepted theories by residents of Juliette is that uranium and other toxins from the coal waste are leaking from the ash pond into the area water table.

"Through the grapevine and small community talk, that's what I hear," Welch says. "Over and over again people ask me, 'Is it Georgia Power? Is there any proof it's Georgia Power? Is it the ash?' I don't know. I can't say. I just want the truth."

Georgia Power, meanwhile, denies the coal ash is causing the high levels of uranium found in the wells.

"Our ash pond is in full compliance with state and federal guidelines," says Georgia Power's Williams.

It's impossible to tell who is right. Coal ash ponds are not frequently monitored by state regulators, and there is almost no federal oversight of these ponds. In Georgia, and many other states, dried coal ash is regulated by the same rules that govern landfills holding household trash.

A sick and scared community

Along Luther Smith Road in Juliette, most of the houses are simple, one-story wood-frame structures with a small porch and a few single-paned front windows. Looking out from those windows toward the street, you would see a thicket of pine trees in front of a large mound of dirt, about 15 feet higher than the two-lane road. The rise in the ground is the levy holding the coal ash pond.

Gloria Dorsett lived across the road from the coal ash pond for decades before Georgia Power bought her house. Neighbors say the cancer survivor drank water from her well. That well is now sealed; the only indication of it is a small rubber hose popping up from a newly laid patch of grass.

I'm not going to bring my grandchildren up in this. Anybody who does would be a fool, I think
Robert Maddox, Juliette resident

For environmental activists such as Jeff Stant, the sealing of the wells should be a red flag for residents. Stant works for the Environmental Integrity Project, an advocacy group, and he says Georgia Power is taking similar actions as other utility companies when coal ash ponds have contaminated water supplies.

"When they do it quietly like that and when they are sealing the wells," Stant explains, "it creates concerns that there might be something wrong with the water people are drinking."

Stant hasn't monitored Plant Scherer, but he is an expert on coal plants. He says it's also concerning that Scherer's ash pond isn't lined at the bottom, a step he says would greatly protect the public's health.

"The EPA has estimated the risk of people getting cancer around unlined ash ponds were as high as one in 50 individuals exposed," Stant notes. "So, it's extremely important to line these ponds. It's nine times higher than the risk of cancer from smoking a pack of cigarettes a day for your entire life."

There are no regulations requiring liners at Plant Scherer's coal ash pond.

Many residents around the coal plant have started asking for their wells to be tested, including Robert Maddox. He's convinced that Georgia Power knows something is wrong with the water, or else they wouldn't have sealed the well.

Maddox was right about his neighbor's house. Georgia Power tore it down on a chilly Thursday night. It took two men and a bulldozer to tear it apart, leaving a pile of broken wood planks and roof tiles.

"Georgia Power should do the same for us," Maddox says. "Even if it ain't them causing these problems, who would ever buy my house, or the neighbor's house, with that mess next door?"