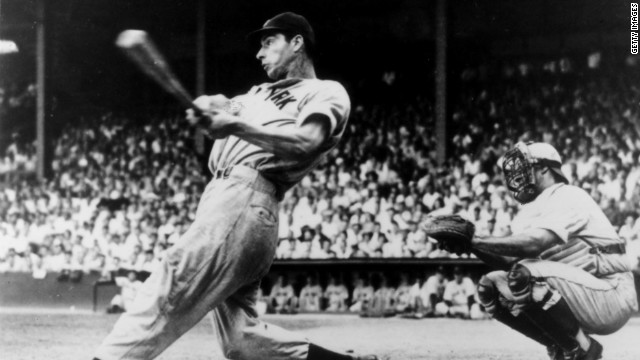 New York Yankees slugger Joe DiMaggio follows through on a swing in the mid-1940s, an era when baseball had 16 teams.
STORY HIGHLIGHTS

No fair looking it up online, or checking a newspaper sports page.

Just name them all.

If you could do it, congratulations -- you may belong in the Hall of Fame. I've followed baseball since I was a kid, and I couldn't come up with all the teams when I tried just now.

I don't feel so bad about it, because I asked two baseball fanatics -- guys who really know the game -- if they could rattle off all the teams, and they had their doubts.

"I probably couldn't do it," said Rob Fleder, formerly executive editor of both Sports Illustrated and The National Sports Daily, and editor of "Damn Yankees," an anthology of original essays about the New York Yankees by celebrated writers, to be published next month. "I'm supposed to know this, but I'd probably miss one or two."

Fleder said that if you were to go up to people on the street and ask them to name all the Major League teams, "I'd guess that only 5% or 10% could do it -- most likely closer to 5%."

Author David Krell, who is at work on "Blue Magic: The Brooklyn Dodgers, Ebbets Field, and the Battle for Baseball's Soul," agreed with Fleder: "Less than 10% of people would be able to do it. Maybe a lot less. I know that I'd end up leaving some teams out."

The reason for this little exercise is that Major League Baseball has just announced that its playoffs will be expanded by two teams, so that 10 teams will now go into post-season play. There are currently 30 big-league teams: 16 in the National League and 14 in the American League.

It's that 30-team number that makes verbally zipping through a list of them so daunting. You just blank out. (When, after Krell and Fleder had predicted that they'd be unable to name all the teams I asked them to attempt it, Krell maxed out at 29 teams and Fleder hit 26 before, 18 minutes into trying, he said he'd toss in the towel. I made it to 29, but I allowed myself longer than 18 minutes. Maybe you did better. If so, Krell, Fleder and I salute you.)

From the first years of the 20th century straight through to the early 1960s, baseball had perfect symmetry: eight teams in the National League, eight teams in the American. Any kid and most adults could quickly list them. It was easy to determine if the town where you lived was big-league: If there was one of those 16 teams in town, then it was. If not, then it wasn't.

There was only one playoff series: the World Series. Under baseball's new system, the equivalent of the entire old National League and 25% of the old American League would make it to the playoffs.

All of this is very good for the baseball business and the television sports business. But just as when any professional sports league expands there are worries about a dilution of the talent pool, so, too, when the playoffs keep expanding, there is a danger of the dilution of memories. When you try to spread big moments out too thin, they don't seem quite as big anymore.

And, as Krell pointed out, for all the benefits and basic fairness that came with free agency, "when players switch teams so much, it's tough for the fans to get a chance to root for a solid group of players for six or eight straight years." The memories keep heading out of town.

How visceral and enduring is the meaning of all this? I still treasure as one of the most dizzyingly wondrous days of my life a single summer afternoon in 1983 when I got to spend time talking with Joe DiMaggio, Duke Snider, Pee Wee Reese, Willie Mays, Roger Maris, Ernie Banks, Bobby Thomson and Stan Musial.

The occasion was the 50th anniversary of the All-Star Game; a special old-timers' game had been arranged. I was working for ABC's "Nightline" in those Ted Koppel years, and I was assigned to do the story. It was like a parade of Topps baseball cards come to life -- the good cards, the prized ones, the cards you hoped against hope would be included in the wax-paper pack you bought at the drugstore, along with that brittle, pink, always slightly stale slab of gum.

(My favorite moment of the afternoon? Easy -- Snider telling me he had gone to a car wash, and, surprised at how inexpensive it was, asking the attendant if the price wasn't usually higher: "And the fellow said, 'Yes, sir, but we give a discount to senior citizens.' " Second favorite moment? The organist at Chicago's old Comiskey Park playing "When I'm 64" as I was talking on the field with Reese, and Reese saying: "Do they have one called 'When I'm 65'?" He was about to have a birthday.)

Baseball clearly did the right thing fiscally by growing past the original eight-team leagues and establishing outposts in far-flung parts of the country. Per-team home attendance is much higher now than it was in, say, the early 1950s. And adding two more teams to the playoffs will make the cash registers ring.

Yet there was something kind of swell about the years when, of course, you could rapidly name every team -- when you knew them as well as you knew the names of the streets in your own neighborhood.

But, as Fleder told me, the act of remembering has itself become largely unnecessary: "We don't have to remember things, so we don't. The answer to any question is: 'Give me five seconds on the Internet.' "

So if you couldn't name those 30 teams, it may not matter. Sincere good luck to baseball with its expanded playoffs. And Reggie Jackson probably doesn't have to worry that some post-season hero will someday supplant him as Mr. October.

At this rate, the new guy will be Mr. November.