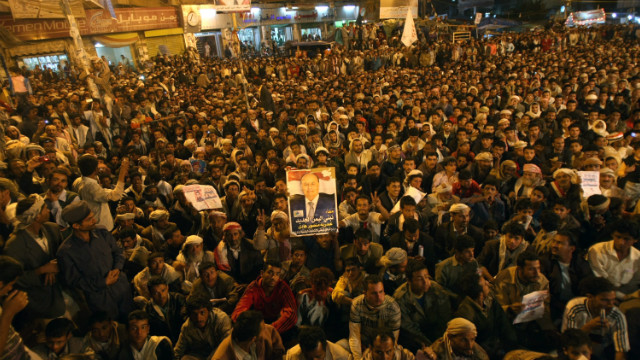 Abdurabu Mansur Hadi -- who served as Saleh's vice president and then became acting president in November in an agreement brokered by the Gulf Cooperation Council -- is expected to be sworn in Saturday in front of Yemen's parliament.

On Monday, a formal inauguration will take place in Sanaa -- one that Saleh is expected to attend. A spokesman for the country's embassy in Washington said late Friday that the president has returned home, after a short U.S. visit for medical treatment.

"As of Saturday morning, Hadi will be Yemen's president and the inauguration on Monday will only be ceremonial and a celebration in support for Yemen's new leader," said Abdul Aziz Jubari, a member of Yemen's parliament from Saleh's General People's Congress party.

Hadi received 99.8% of the 6.6 million votes cast in Tuesday's election, according to Mohmmad Hassan al-Hakimi, chairman of the Supreme Committee for Elections and Referendum.

Saleh was wounded in a June assassination attempt at his presidential palace during battles between government troops and tribal fighters.

A "massive celebration" was being planned for Saleh, who will not necessarily disappear from Yemeni politics, said Abdu Ganadi, a senior Saleh aide.

"Saleh has the option to continue involvement in politics and the power transfer deal will not force him to step aside," Ganadi said. "He is the leader of the GPC and his voice and support will continue being heard in the GPC."

Human Rights Watch has called on Hadi to make changes without delay.

"Yemen's potentially historic transition will be off to a shaky start unless Hadi makes an immediate break with the abuses of the past," said Letta Tayler, HRW's Yemen researcher. "Yemen's new leader needs to move decisively to usher in promised reforms that uphold human rights and the rule of law."

The 65-year-old Hadi is a British-, Egyptian- and Soviet-trained army officer, recently promoted to field marshal. He had been vice president since 1994 and ran for a two-year term as president on pledges of improving security and creating jobs.

But he's never had much of a power base, and Yemen's problems are expected to take longer than two years to fix. Yemen is the poorest country in the Middle East, with a severe shortage of water and rising levels of malnutrition among its population of about 25 million.

Saleh faced a separatist movement in the south, sectarian tensions in the north and the growing presence of what Western officials describe as al Qaeda's most dangerous affiliate, al Qaeda in the Arabian Peninsula.